Survive when others die! It weighs 4.6 tons and pampers its occupants, removing them from the danger zone: the new Mercedes-Maybach S 600 Guard is now underway with an armor. Auto motor und sport drove the Security master on slippery turf.

Hiding behind an overturned table to escape the bullets only works in movies: A Magnum revolver bullet type .44 for example can pierce its way through no less than eight conventional car doors. After the eighth door it is hardly slower, explains Markus Nast from Mercedes Driver Training. The maximum energy levels of a .44 Magnum is 1,500 joules – nothing compared to the more than twice as high energy of a projectile of the type 7,62 × 54 mm R, which is fired, for example, by the Russian sniper rifle Dragunov. Against this sniper-fire now stands the Mercedes-Maybach S 600 Guard with certification in accordance with protection class VR10, higher than BRV 2009 version 2 (BRV: Bullet Resistant Vehicles).

Currently there is no other production model on the market that meets the VR10 requirements. The designers of the S-Class have to consider the armored versions right from the outset, so no significant changes have to be made to the interior during the armoring process. And the armor has to fulfill two opposite goals: inflexible materials keep the car safe against projectiles, flexible materials against explosions. The protection against explosive attacks is documented as complying to the ERV 2010 (ERV: Explosive Resistant Vehicles). The underbody of the armored S-Class consists of a steel-ceramic mixture. While the armor has to withstand maximum forces, the shell also helps the S-Class reign supreme in terms of silence. 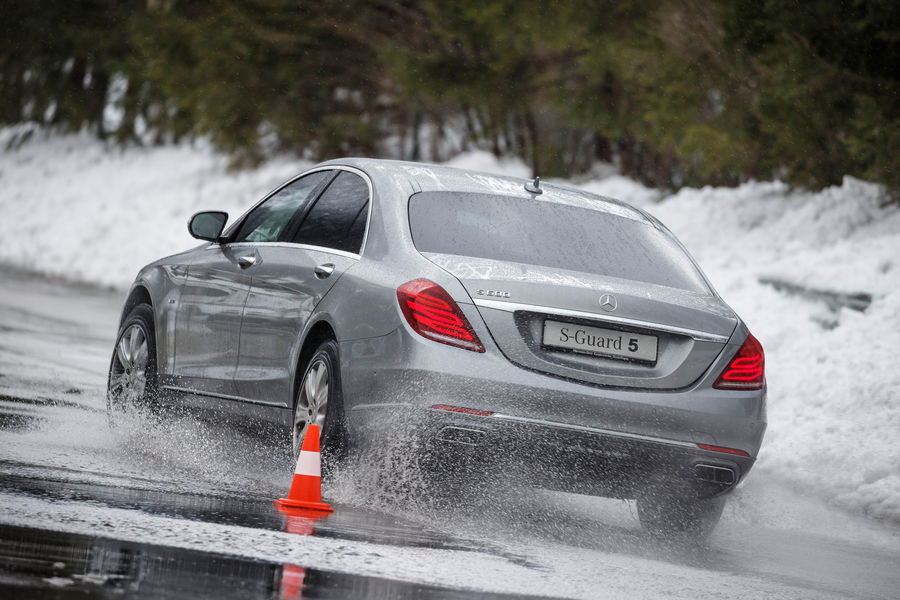 It is also clear that the protection offered by Mercedes is primarily intended to attacks in civilian life. Weapons that would successfully work against the modern battle tank type Leopard 2, would naturally defeat an armored civilian vehicle pretty easy. Even so, Markus Nast says that the shell applied to the S-Class Guard represents the maximum amount of armor that is possible in a vehicle, without making it look like a military tank.

And indeed one must look carefully to distinguish the armored S-Class from its conventional siblings. The black edges of the front and rear windows are thicker, the extra glazing glimmering bluish in certain lighting conditions. In case of an attack, the glass pieces splash meter away from the side windows of the armored Mercedes S-Class. Not a single glass splinter may land inside the car. In addition, the interior of the S-Class is finished with white cloths – if traces of smoke can be seen on these cloths, the test is failed. The most difficult thing to armor the windows – and these make the car not only more heavy, but relocate the center of gravity upwards.

The Michelin wheels (PAX 225-720 R490 117H) go over beaded into the rim as additional steel rings ensure that the tires do not slip in case of a flat. Obscured by the tires: at the middle of the rim sits a hard rubber ring which allows the Proceed On function for the shredded tires – a conventional run-flat system is not comparable to this technique.

The opening of each 160 kg heavy door requires significant strength. If the car is inclined, to open a door a trained arm is required. The safety instructors warn: Do not open these doors while driving. When stopping it would follow with their 160 kg of the inertia and could damage the reinforced hinges. And another warning: when closing the seven centimeters thick side windows, do not put your fingers between the glass and frame – a safety stop does not exist, the windows simply drive all the way to the top. 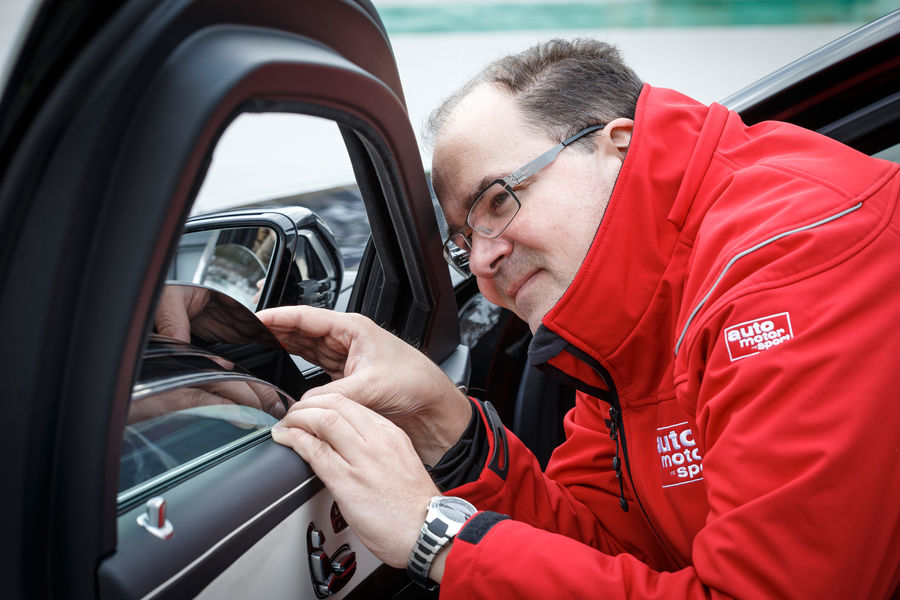 However, an armored vehicle with open side windows is no longer an armored vehicle, so the windows are likely to remain mostly closed. The view through the thick windscreen, whose weight increased tenfold of 13 kg in stock condition to 130 kilograms, is revealing: Outside everything seemed a bit dull and dark – several layers of special glass and foil hamper vision, but the view is still good. At the edges of the bottom right and left, the driver gets a highly distorted picture of the environment. Long night trips will be a bit strenuous with such a view. Also: the last inner protective film must not be scratched or come in contact with chemical cleaning agents – then the car loses its protection class.

Under a flap at the base of the cup holders cool James Bond equipment awaits us: By pressing a button the drivr can activate the extinguishing system, which effectively deletes via aerosol emissions fire under the car. In addition, the interior can be injected with fresh air from an under pressure oxygen tank, to escape a possible gas attack. The optionally available fresh air system (9,282 Euro) sits under the boot floor, where usually only the jack and the white gloves are housed for wheel changing scenarios. The tank of the S-Class Guard is not armored, but coated from the inside with a special material. If the tank is hit, this material closes the hole immediately and automatically. This self-sealing material is used among other things in the tank attack helicopter Boeing AH-64 Apache.

The Mercedes S 600 Long is in this Guard variant powered by the same unit as the regular model: The V12 delivers 530 hp and a peak torque of 830 Newton meters towards rear axle. Steering, axles, bearings: All supporting parts are reinforced, aluminum parts are replaced by steel. With a significant weight increase pending. Thus, the S-Class Guard is on the road like no car – and becomes a more sedate vehicle. The acceleration deteriorates from 4.6 to 6.8 seconds and Vmax is reduced by 40 km/h to 210 km / h and the consumption average rockets to 12.9 liters high. 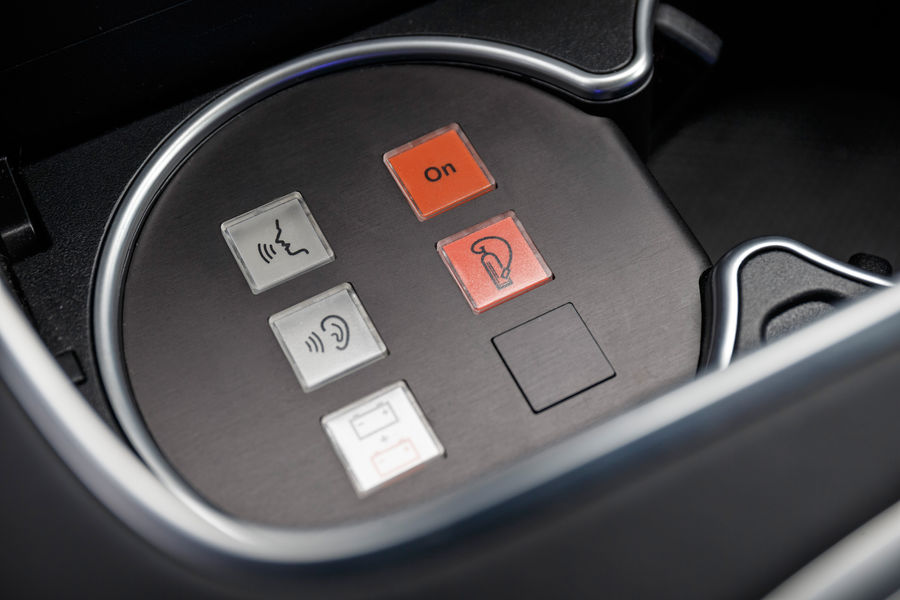 But even if the weight more than doubled from 2,185 to 4,660 kg (a Mercedes Atego 818 truck weighs about 5,000 kg) – the dynamic character is not completely ruined. Thanks to its weight grip is without limits. Over- or understeer of course should be avoided, otherwise the 4.6 tons of glass and iron will follow simple physics. But ABS and ESP and the monstrous brakes are adapted to the weight of the car, so it can be intercepted quite well. As so often, the problem is not so much to adapt the vehicle, but rather the driver who should get familiarized with the armored S-Class. Again, it means: practice, practice, practice.

Although avoidance maneuvers work well despite the extra bulk, the driver should always be alert and ready to put its skills to test. In Russia and the Middle East sits the main clientele of superheavy sedans. America is also doing well, as it also presents as an opportunity to defeat the Mexican kidnapping industry (290 kidnappings per day). According to the Safety instructors, it is important to use the first three or four minutes after an attack to escape. In terms of driveability armored limousines have incidentally an advantage over armored SUV or SUV: your focus is much lower, which makes them less susceptible to tipping over. 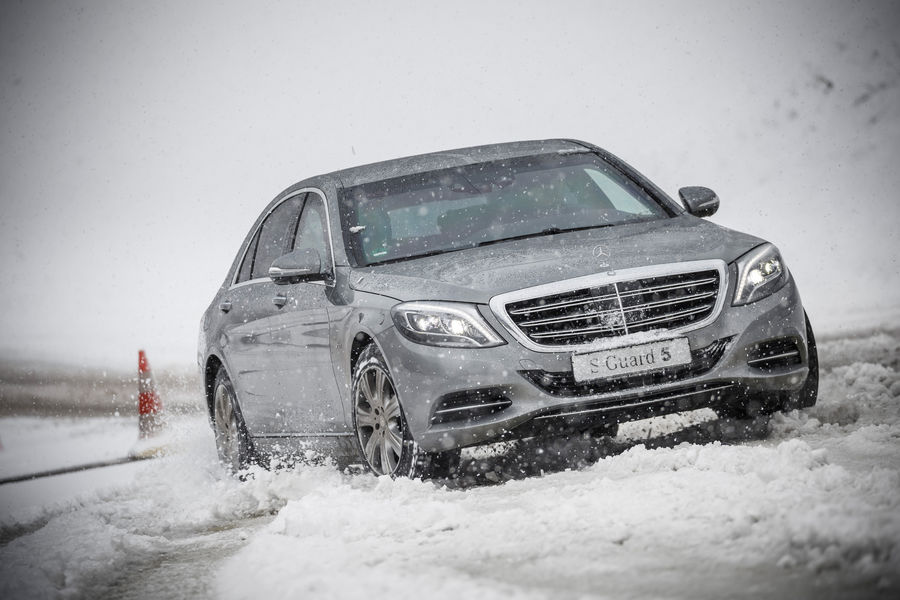 The armored S-Class will be built in the Mercedes plant in Sindelfingen. From order entry to shipping, it takes nine months. As the clientele often do not want to wait that long, the cars are pre-produced and stored. According to Markus Nast, an S-Class Guard can be ordered in any color imaginable. So much for the theory. 99 percent of the sold armored models come in black – pre-production simplified. Possible extras include not only the official price list for extras – many things appear in any official catalog on. Things like a device that makes it possible to shoot out of the car, without deteriorating the armor. Unusual in normal life but not secret: a weapons safe for the trunk can also be fit for 2,380 euros. For the purchase of passenger dummies that are to confuse potential attackers in the choice of target, Mercedes refers to dolls or mannequins manufacturers. 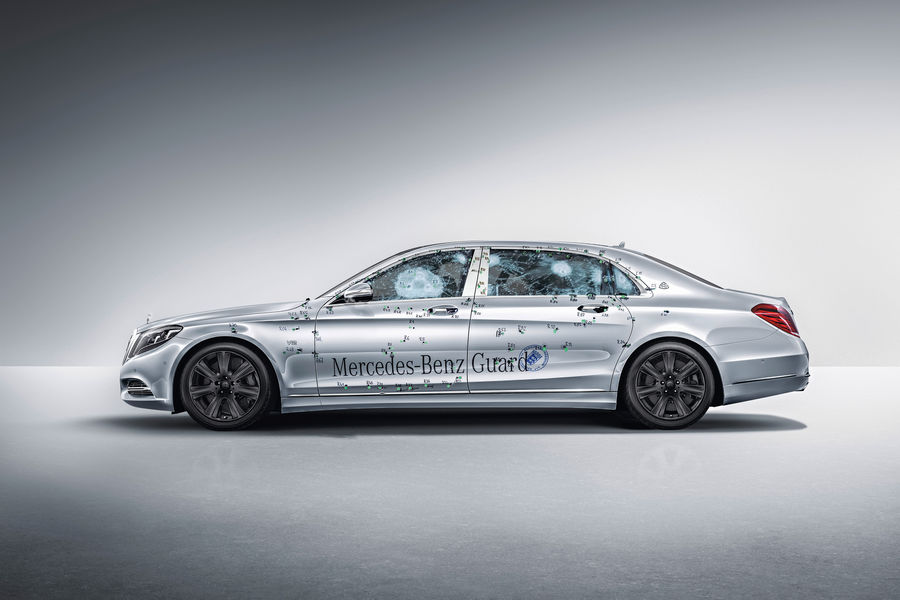 The basic version of the Mercedes-Maybach S 600 Guard costs about 560,000 euros, but buyers are to be verified by Mercedes itself, to restrict access of criminals to the new car. The purchase price includes a driver training is included. However: after the selling point, Mercedes loses control of the car, then the owner can resell it as he wants. According to Mercedes, the Guard Department has good relationships with their customers – many buyers give their car back when buying a new one as down payment. Also, Mercedes offers armor sensations ex works as a tank version: The G 500 Guard (resistance class VR7 to BRV 2009), the GLE 350 d 4Matic Guard and the GLE 500 4Matic Guard (resistance classes VR4 or VR6 to BRV 2009 ERV 2010) and S-Class as S 500 and S 600 long. Competing models are available from Audi and BMW and now also from Jaguar and Bentley. The armored SUVs Land Rover sells also have a place at the party. Still, Mercedes is currently the market leader for armored civilian vehicles.