Alpha Armouring is a German company specialized in turning big SUVs into big armoured SUVs for those rare situations when you need protection over rough terrain.

But if you need protection, that means people want to harm you; if people want to harm you, then you’re probably a rich and/or important person, so comfort is pretty high on your priorities list. Alpha Armouring knows this all too well, so this refurbished G 63 AMG has enough luxury features even for the pickiest customer.

A picky customer certainly needs privacy, so the Phoenix has a partition wall between the driver and the rear VIP compartment and an electric window for when you don’t want to talk directly to the person driving the car but you don’t mind seeing him. When you do want to discuss with the driver you can use one of the two intercom systems, the other being used for conversations with people outside the Phoenix (Ring, Ring! “Yes?!” “Sir, would you mind terribly if I tried to kill you?” “Yes, I believe I would” “Oh, never mind then, sorry to bother you. Cheerio”!). 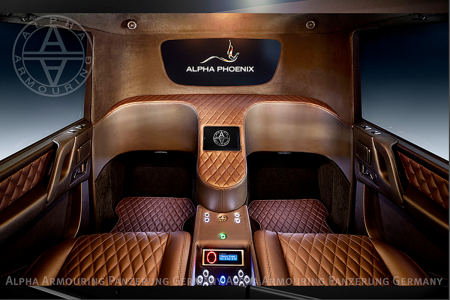 Connected to that partition wall is a 34″ electrically adjustable screen which can be used for different purposes, one of which being to relay the images of the four exterior video cameras. Somewhere inside the Phoenix there’s an integrated Mac Mini with internet access and an iPad which also acts as a remote control of some sorts.

There’s individual climate control for the VIP compartment as well as a refrigerator, plus some very comfortable looking seats which the manufacturer says are “similar to private jets”. Just don’t get carried away: even though the Phoenix is essentially a G-Wagon, don’t expect it to go everywhere a plane would. 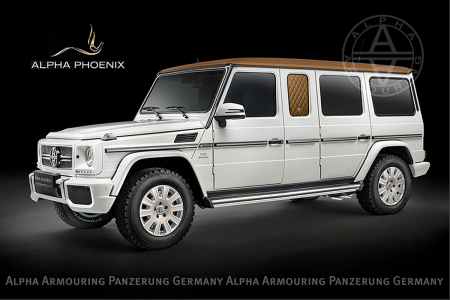 There’s no word on the actual armouring of the car, but the guys at autoblid.de have gotten their hands on it and said the doors alone weigh no less than 170 kilograms, which is about the weight of two grown up males. It’s fair to say that, by the looks of it, Alpha Armouring have managed to mix luxury with excellent protection with their Alpha Phoenix armoured G 63 AMG.

Also, for the German speakers, you can read a full review of the car here, made by autobild.de