“My name is Fernando and I race karts. I want to be a Formula 1 driver.” Those are the first words uttered by Fernando Alonso after waking up in the hospital, the Spanish newspaper El Pais claims. The Spaniard crashed during a test session in Barcelona, on the 25th of February.

To play down the rumours, Lewis Hamilton’s and Nico Rosberg’s rival posted a video on his YouTube channel. “As you can see, I am completely fine”, he says, after the media claimed that the last 20 years were simply erased from his memory and could not remember any moment that happened in his life after 1995.

The McLaren reps say he only had a temporary memory loss and he was not brain damaged, but very likely he will not be competing in the first race of the season in Melbourne. 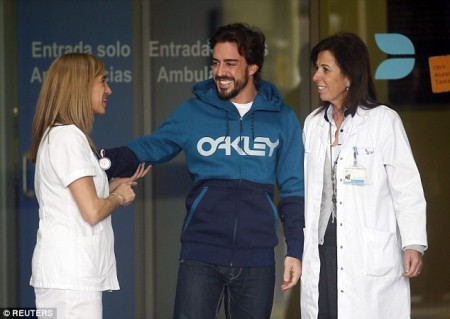 Three days after his Barcelona crash, Alonso was released from hospital, all smiles, joking with the doctors, waving and showing his thumb up at the media waiting outside. Few days later, he regained his playful style and made his fans laugh on Twitter, proposing a hashtag that rallies against the latest rumours: “In a few days the championship starts and we ran out of imagination. I propose a game of RT (retweet) to the most creative. #whereDidYouWakeUpToday”, was the message for his two million followers on the social network.

The 33-year old McLaren driver smashed his racing car into the guardrail of turn number three on the racetrack in Catalunya. Even though he was only lost consciousness for a few seconds, the paramedics arrived at the crash scene decided to airlift him to the nearest hospital.

“Fernando was unconscious for several seconds after impact. We could hear him breathing through the radio”, McLaren chairman, Ron Dennis, stated shortly after the crash. During previous laps, Alonso has complained about the wind blasting in that turn and making the car difficult to control.

The Spaniard has recently rejoined McLaren, after a fourth and final disconcerting season in Ferrari. He had previously won the world title two times, in 2005 and 2006, behind the wheel of the Renault racing car.