Mercedes-AMG or Porsche? The eternal debacle. In its most basic form the Mercedes-AMG GT will cost less than the Porsche 911 Carrera GTS. But it does more and better. On paper at least. Can it do the same on the race track? Let’s find out what Auto motor und sport has to say about it.

Lack of courage is the last thing you can hold against Tobias Moers, head of Mercedes-AMG. He likes to play only with the best and has already won with its flagship GT S the duel against the mighty Porsche 911 Turbo twice. Now it’s time for the 911 Carrera GTS to face the wrath of Moers.

His base-GT comes with 48 hp less compared to the top GT S but the performance shortcoming are nowhere to be found. Less power is relative: the four-liter twin-turbo still develops a remarkable 600 Nm (GT S: 650 Nm). Even more remarkable is that its starting price is set at 115,430 euros. 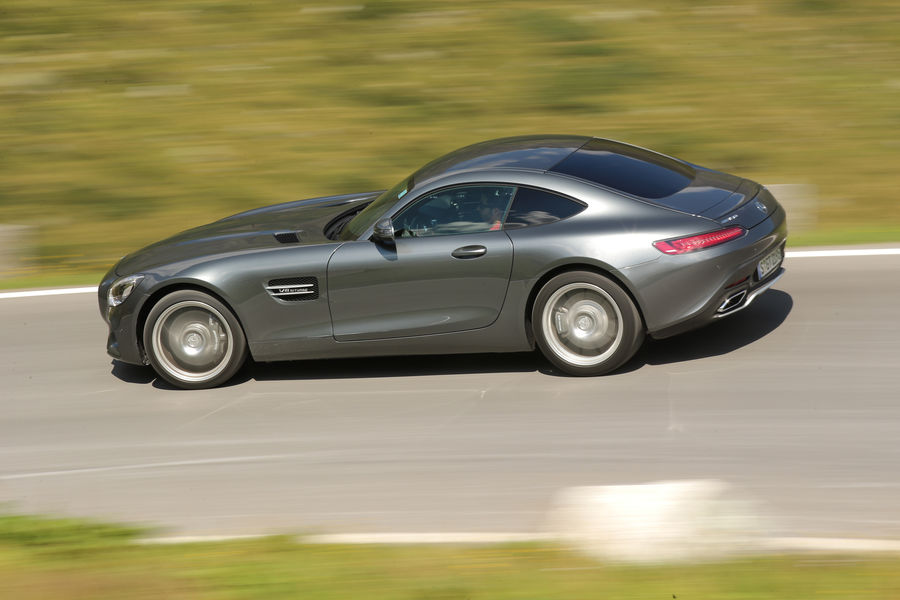 At least 117,549 Euro, this what Porsche asks for its Carrera GTS, the sweet spot of the 911 range. However, in order to compare it with the AMG, one must add the dual-clutch transmission for 4,141 euros. Thus, the price difference increases to 6,260 euros, which makes the GT sound even more like an offer.

Never mind the price, though, the Look factor surrounding the Mercedes is what truly outshines the conservative Porsche, as design is after all one of the main reasons for buying a supercar in the first place. What counts in this duel are the lap times achieved on the small track of Hockenheim. 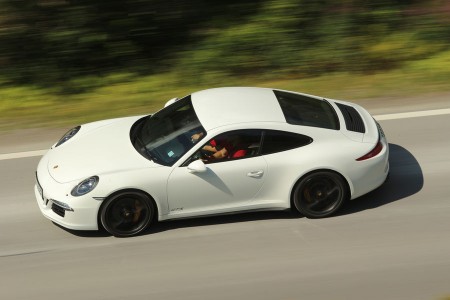 Because we do not want to bore you, here’s a quick recap of what matters for normal people: the AMG offers more luggage space, better displays, more security and multimedia features (even though he gets a point deduction because of wind noise). The Porsche is more spacious, better finished and better equipped and consumes less (on average 11.8 liters of Super Plus instead of 12.3 for the GT, per 100 kilometers). Uff, now that we’ve got that out of the way; we have 152 lines left for illuminating the really important purchase reasons.

Therefore, let’s head over to Hockenheim. With the prevailing high summer temperatures, the tires are almost warmed up when leaving the parking space. No semi slicks. The 19-inch (instead of 20 on the 911) Michelin Pilot Super Sport on the AMG, however, have reached quicker the appropriate temperature. Nevertheless, the size 295-rear tire can easily withstand the torque surge. In 3.7 seconds, the biturbo V8 rumbles the AMG to 100 km/h, loose power seemingly pouring out of his sleeve, a feeling not far off from the experience naturally aspirated Big Blocks from the United States offer. You quickly forget that the GT is shoveling all these power reserves through two turbochargers, feeding air into the combustion chambers like mad dogs.

Back to the curves now. No need to regret for not going full out and get the stronger GT S; the money is better invested in accessories. What about the fact that the GT has to make do with a purely mechanical lock differential? No matter, in conjunction with the Sport-ESP, the AMG traction is always perfect.

The limiting factor is understeer. On normal roads, it never occurs, on the contrary, here the front-engined two-seater escapes almost ludicrously good from corners. Its steering is hyper direct; so the AMG feels smaller and lighter than it actually is. On the small Hockenheim track on the other hand, where the cornering speeds are considerably higher, you have to give the GT time to hook its front wheels in line with its 1,6-tonne bulk, the limit of adhesion having to obey different physical laws compared to the 911th.

So, the Porsche still leaves room for improvement, if the AMG already abuts the ceiling. On the highway the Carrera GTS knows nothing about understeer, as little as the AMG in fact. Now, however, the test car not only comes with ceramic brakes and power steering Plus, but also with the sports suspension including 20 mm lowered ride height and harder, thicker stabilizers. Amazingly, the suspension comfort hardly suffers. Despite the 20-inch alloys penalty, the 911 absorbs short bumps as elegantly as the Mercedes. 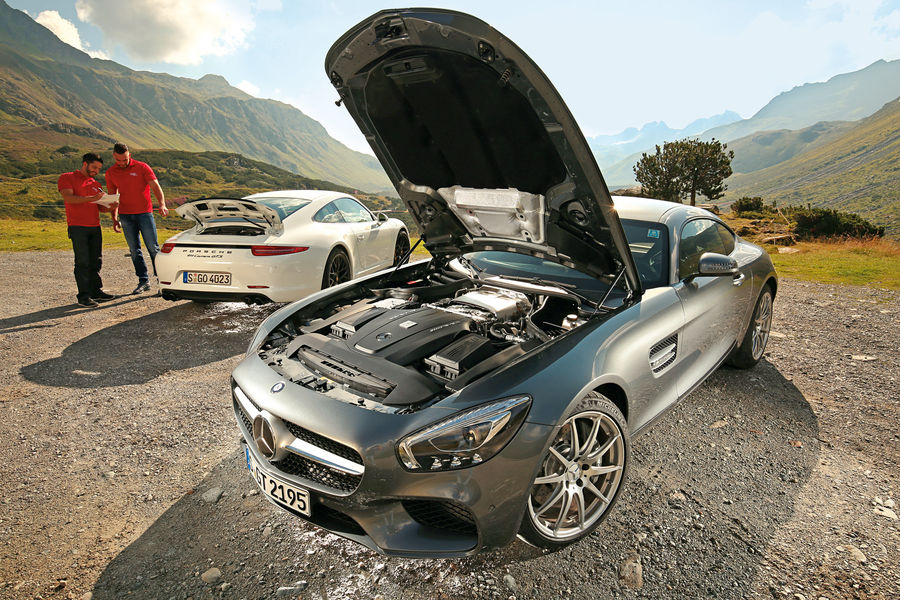 But what is already evident right from the outset is the more direct connection between the driver and the chassis. Even in the comfort mode the adaptive shock absorbers make the Porsche barely shudder in front of the tightest bends – and yet receive any amount of transverse forces without a hint of faint. Ultimately, this feedback captures the magic balance between of steering, suspension and brake efficiency, a fitting homage to the decades old perfection of the German sports car icon. Let’s not forget the unparalleled six-cylinder boxer engine, always eager to ‘fight’ as the driver hangs on to the gas, so ludicrously fast as it revs up, and so unmistakably vocal as he trumpets his way ahead in Zuffenhausen music notes. 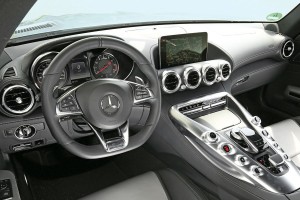 Against the sheer brutality of the AMG biturbo, there’s nothing it can do though. On the open road you have to let the boxer bark vigorously over 4,500 rpm to follow in the GT’s footsteps. The lack of torque is obvious every time the 911 has to catapult itself out of the apex. Not at Hockenheim, where the car runs constantly at high speed on the track anyway.

Action, reaction. No acclimatization, no getting warm with idiosyncrasies. Especially as in GTS guise the Porsche 911 Carrera delivers exactly what is expected of it, moving with constant precision and being ever-adamant to slow down. No ifs or buts, the 911 remains the driver’s car. 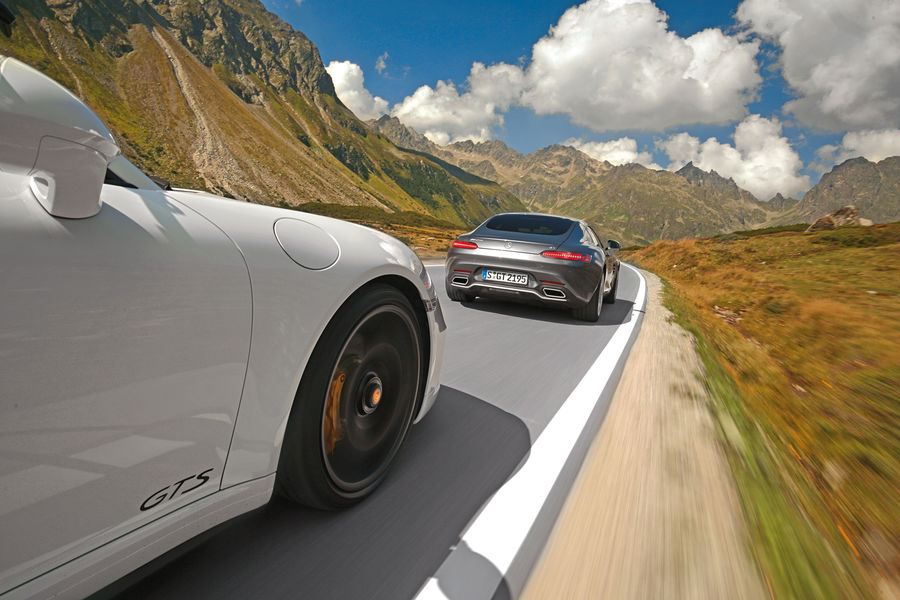 In Porsche’s corner, many nails have already been bitten. Not today! The GT can not get away anymore simply on its sheer power and image advantages and loses… almost. But knowing how ambitious AMG boss Moers is, he’ll ask for a rematch and hone a dynamic revision for its baby supercar in no time. Bring it on!