Following the early leak of the all-new smart fortwo Cabrio no further than yesterday, we reveal the first video teaser showing the new drop-top in all its glory.

The film shows a cheerful duo rolling down the streets of San Francisco, enjoying the open-top pleasures of the new miniaturized convertible. Contrary to earlier rumors, it seems the new model will in fact retain the ubiquitous fixed rear roof pillar with the electrically-operated canvas rolling all the way down and tuck away right on top of the baggage compartment.

The pillar is still removable though, the manual operation taking less than a minute. No structural changes have been made with the tridion safety cell strong enough to compensate for the lower rigidity of the body.

The engine line-up is set to feature the now familiar array of three cylinder petrol engine, in naturally aspirated (1.0-liter, 71 HP) or turbocharged form (0.9-liter, 90 HP), offered in the company of the double-clutch twinamic transmission too.

Smart is hiding a few other aces down its sleeve, so the third generation ForTwo Cabrio is not the only surprise planned for the coming months. In 2016, the latest, the smart line-up will also see the introduction of the new electric drive versions of the ForTwo and ForFour, which will share their battery technology with the upcoming hybrid Mercedes-Benz C-Class, E-Class and S-Class. 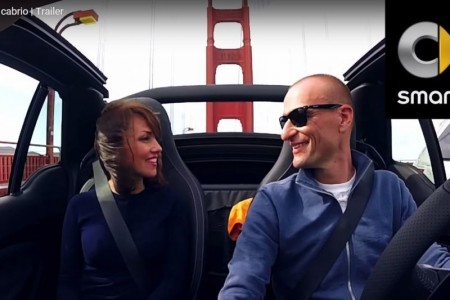 The premiere of the all-new smart ForTwo Cabrio will take place in less than three weeks time, at the Frankfurt Auto Show. The commercial debut of the upcoming drop-top has already been confirmed for December 2015.