The all new Mercedes G-Class will debut next month, at the NAIAS Detroit motor show. We had the chance to experience the interior first-hand and now Mercedes-Benz has lifted the embargo and revealed the first official pictures too.

Since 1979 more than 300,000 examples of it have allowed their owners to experience adventures that would have been unachievable with any other vehicle. Outwardly, the “G” has changed very little. But in fact this very special off-roader has constantly reinvented itself. With its completely updated interior and numerous new features, the G-Class has now undergone the most significant transformation of its almost 40-year career, in technical as well as stylistic terms – while still managing to stay true to itself.

Hallmarks of the G-Class include the grab handle in front of the front passenger and the chrome-highlighted switches for the differential locks, positioned in clear view. Both have been meticulously optimised and retained as characteristic features. 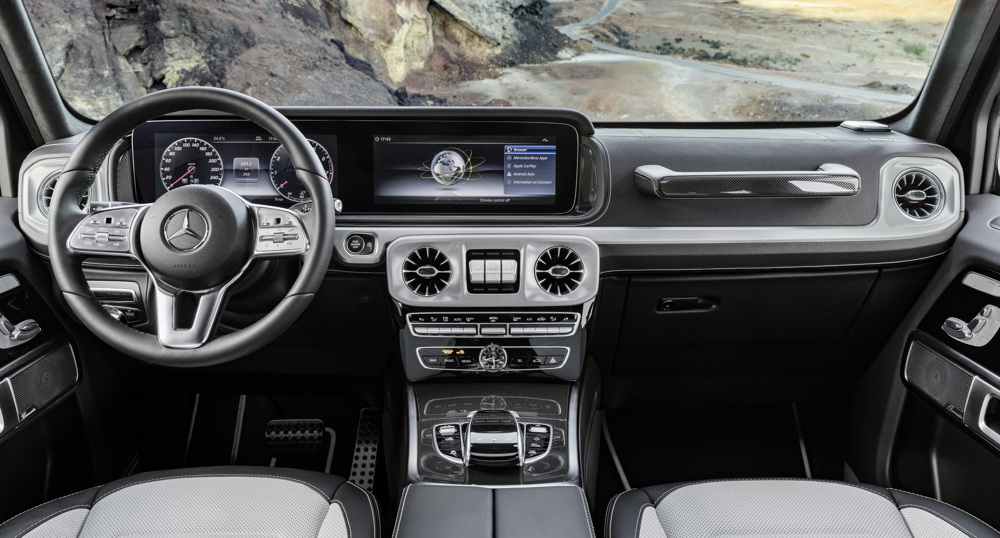 The very clearly laid-out and completely redesigned instrument panel features timeless tube-look analogue dials as standard. In other words, fans of classic round instruments will certainly not be disappointed in the new G-Class. As in the new E and S-Class, an alternative instrument panel in the form of a large display screen showing virtual instruments in the driver’s direct field of vision and a central display above the centre console is available as an option. Two 12.3-inch displays blend visually into a wide-screen cockpit beneath a shared glass cover. Drivers can choose between three different styles for the displays – “Classic”, “Sport” and “Progressive” – and also configure relevant information and views according to their individual needs.

As we witnessed at a private preview event earlier this year, where we had the chance to see the new dashboard live, the quality of the interior will be years ahead of what we know today. Even in its standard specification, the G-Class’s timeless and authentic open-pore wood trim gives it an air of classical elegance. Its stylish details include the generous use of high-quality metal or carbon fibre trim, and its leather seats. 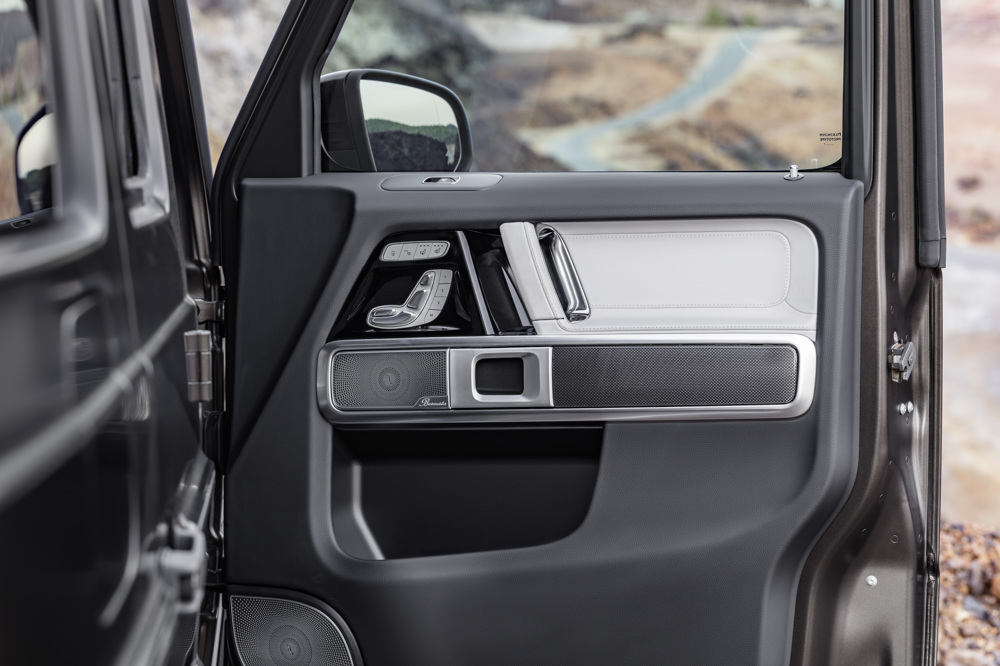 The doors are very solid, clear evidence of that hallmark “G” functionality. The stowage space concept has been thoroughly overhauled, with numerous new storage areas ensuring that everything has a home. Under the armrest, for example, is an illuminated compartment for small items such as chewing gum, handkerchiefs or perhaps sunglasses. A wireless charging point here can be specified as an optional extra. In front of the touchpad in the centre console are two removable cup holders and an oddments tray. The rear doors are each capable of accommodating a 1-litre water bottle. The rear bench seat has a freestanding backrest, so allowing maximum variability and better visibility through the rear side windows.

The revised dimensions of the now larger G-Class do not only benefit the driver, but also the passengers in the second row.

The most important data at a glance:

The rear seats can be folded down to 60, 40 or 100 percent. The seats in the G-Class are equipped as standard with numerous convenience functions such as the Memory function for the driver’s seat, seat heating front and rear, and luxury head restraints in the front. Such ride comfort can be enhanced still further if so required with the Active Multicontour Seat package. As well as the special multicontour seats, this encompasses such features as a range of massage functions, climatised seats and fast seat heating. This variant also offers electrically adjustable lumbar supports for the driver and front passenger. The side sections of the seat cushions and backrests of the active multicontour seats include integrated air chambers that fill or empty on a continuous basis according to the driving dynamics, so providing better support for the seating positions of driver and front passenger and, for example, offering more lateral support during cornering. The front seats of the Active Multicontour Seat package are recommended by experts from the German spinal health organisation “Aktion Gesunder Rücken e.V.”.

G-Class drivers are able to control the full infotainment system without taking their hands off the steering wheel. The touch-sensitive Touch Controls on the steering wheel respond to swiping motions in the same way as the surface of a smartphone. Thanks to haptic impulses and additional feedback from the onboard speakers, the driver can use the touchpad without looking away from the road. The input options are rounded off by shortcut keys in front of the Controller for frequently accessed operating tasks, and by the optional control array for the driving assistance systems above the rotary light switch. The driver sits up close to the windscreen and enjoys good all-round visibility from behind the wheel.

There are so many variants for the new G-Class that it is extremely rare for any two cars to be exactly alike. This wide range of equipment options is made possible by the fact that features from the designo manufaktur range have already been integrated into the standard equipment variants. 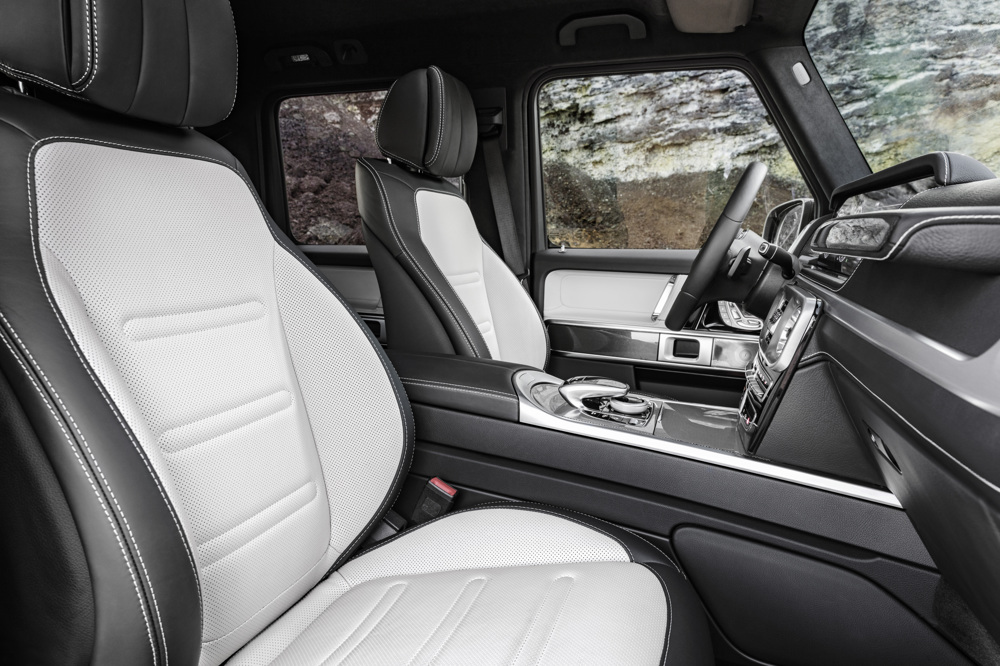 Passengers are accommodated as standard on seats in Lugano leather in black, nut brown or macchiato beige. There is furthermore a choice of two top-class equipment packages: Exclusive Interior and Exclusive Interior Plus. The Exclusive Interior is available in a range of seven colours. Three of these are elegant combinations of nappa leather in black and one of the designo manufaktur colours platinum white, yacht blue or classic red. The package also includes a black designo roof liner in DINAMICA microfibre, along with air vents in silvershadow. The Exclusive Interior Plus comprises additional elements in nappa leather such as the door trim, sections of the centre console, the instrument panel and all the upholstery. A particular feature here is the seat design with dynamic diamond-pattern quilting. With this package, customers have a choice between the designo shades of black, espresso brown and classic red. For the first time it is also possible to order a light-coloured interior throughout, in macchiato beige – encompassing everything from the flooring to the roof liner.

The sporty AMG Line can be combined with all three variants. In this case, black seats are combined with contrasting topstitching in red for the seats, instrument panel, doors and centre console, along with red seat belts. It is a look that goes well with the very sporty steering wheel with flattened bottom section, now also available for the first time for the G-Class. 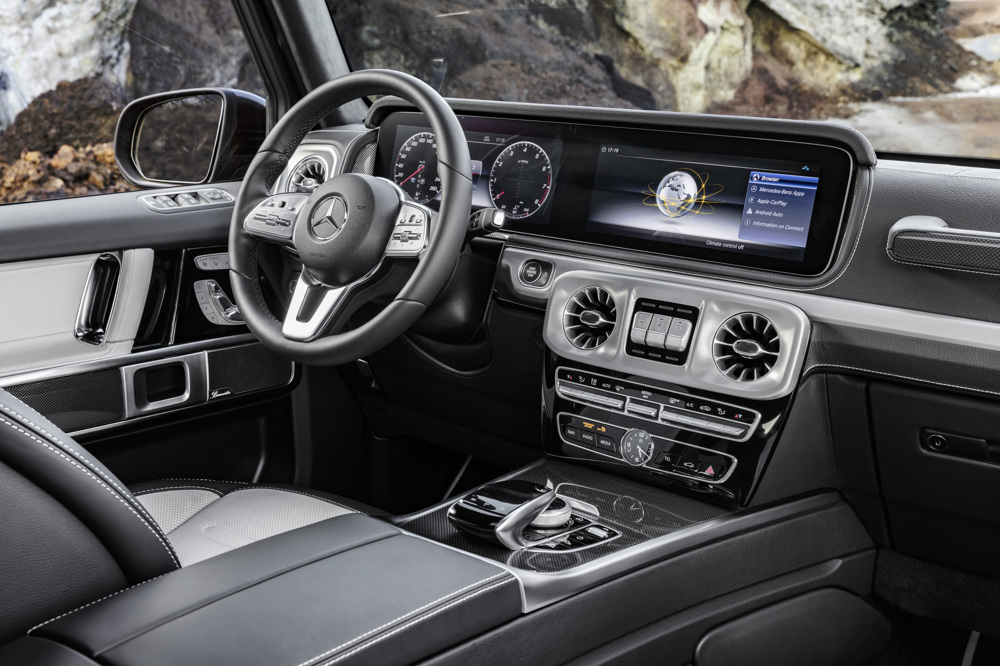