In anticipation of Infiniti Q30’s Frankfurt motor show debut, the first picture of the dashboard has spilled over the internet. And it’s a Mercedes interior parts bin fest. 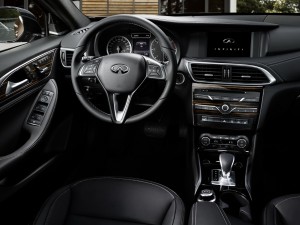 In a strange twist of corporate planning, Infiniti seems to have taken Mercedes helping hand more seriously than we first anticipated. The Japanese have not only accepted the kind offer to share platforms and engines, but have also literally robbed Daimler’s ‘organs bank’.

At its foundation of Infiniti’s first-ever compact car we find Mercedes’ own MFA compact car platform. Yes, you’re right, the very same modular architecture underpinning the entire family of compact Mercedes-Benz models, A-Class, B-Class, CLA and GLA included. But you might have missed is that the new Q30 is also blatantly copying Mercedes’ interior architecture, everything from the buttons on the center console or the windows switches to the instrument cluster are lifted straight from the current generation A-Class. Even the steering wheel is identical. With the exception of the badge, of course. 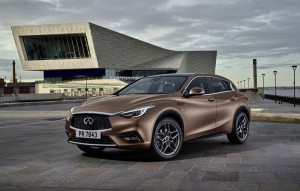 Badge engineering at its worse? Not quite, thankfully. Infiniti decided to save face and apply its own design language at the exterior. The new Q30 compact hatchback comes with a rounder, more feminine look compared to Mercedes’ more angular, aggressive toned A-Class.

Under the bonnet we’ll find tweaked versions of Mercedes sourced four-cylinder turbocharged petrol and diesel engines. The definitive power output of the 2,1-liter diesel remains a mistery, though, as Mercedes might decide to put some distance between its own compact hatch and the new Q30 and supply Infiniti with a lower-powered version of the 170 HP/177 HP unit.

The new Infiniti Q30 will be joined by its sister QX30 compact crossover in 2016. Both models are set to be built at Nissan’s Sunderland factory in Great Britain.