Acura NSX Reborn. Should the Mercedes-AMG GT be Afraid?

The wait is over. After teasing its fanbase for nearly three years, Acura finally unveils its all-new mid-engined NSX supercar. The Japanese brand decided to revive a legendary nameplate, honoring one of its most beloved models, the original NSX, built between 1990 and 2005 with input from Ayrton Senna himself. Should the Mercedes-AMG GT be afraid?

The transition from concept to production form has been surprisingly swift. The angular, emotional design has not changed significantly, with hints of the old NSX still thrown in the mix as a reminder of a Golden era gone-by. Dimensions-wise, the NSX gained a few millimeters all-around in order to accommodate the complex hybrid system. It now measures 4.47 meters in length and 1.22 meters in height and is 1.94 meters wide, with an wheelbase of 2.63 meters. The NSX is about 40mm longer the original prototype, as well as 130mm wider and 45mm higher. 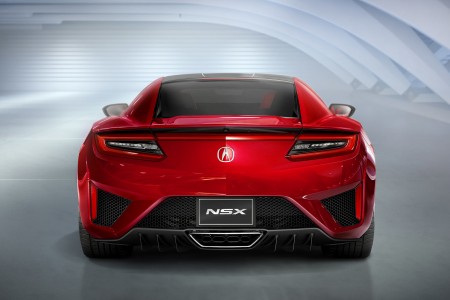 The air intakes adorning the C-pillar have also been inherited straight from the study, however, being further tested in the wind tunnel, they have now become fully functional. Specific weight figures remain under wraps. The NSX  benefits from a new multi-material structure with an ultra-stiff carbonfibre floor and the lowest center of gravity in its segment. The car is constructed from ultra-high-strength steel and aluminium. The floor of the structure is made of carbonfibre, while the body panels are made from a combination of aluminum and sheet moulding composite. 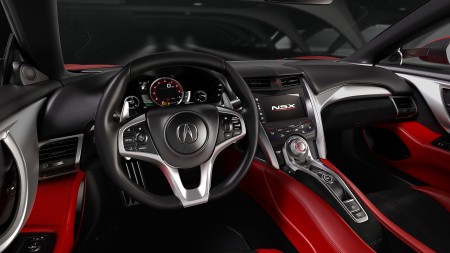 Swathed in red leather, the cockpit is refreshingly simple, fully tailored around the driver. The TFT display hidden behind the steering wheel evokes the digital instrument binnacle of the original NSX, changing its ambiance accordingly to each of the four selectable driving modes: Quiet, a pure electric program for low speed traveling, Sport, Sport + and Track – revealing the full spectrum of the NSX’s capabilities. The driver can alter the response of the engine or the chassis characteristics, while a launch control system is also available, providing ideal traction. Exact performance figures will be released only prior to the car’s commercial debut. 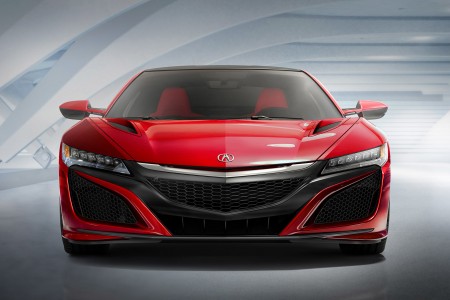 The new Acura RSX is the beast with four hearts, a petrol-electric hybrid powertrain driving all four wheels. Right behind the driver’s seat, beats the longitudinally mounted, twin-turbocharged V6. With an estimated output of more than 550 HP, the DOHC dry-sump unit is matted to an equally new nine-speed dual-clutch transmission and three electric motors. One of them sits between the combustion engine and the transmission, supporting acceleration, braking and transmission shifting performance. The other two electric motors are mounted on the front axle and can operate the front wheels independently, for Torque Vectoring. As a result, the new NSX can achieve record cornering speeds and benefits from the myriad of advantages that only a Four Wheel Drive system can provide, or Sport Hybrid Super Handling All-Wheel Drive as Acura calls it. The T-shaped battery pack is mounted down the car’s centre tunnel and behind the seats. 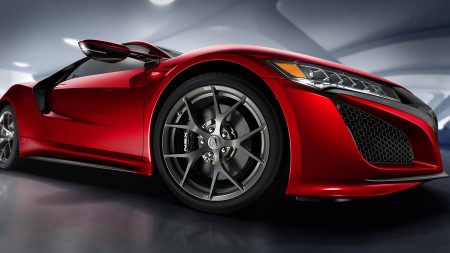 The all-new Acura NSX has been developed in the US and will be built in Marysville, Ohio. The order books shall open this summer, first deliveries being scheduled for the end of 2015. Prices should start at 155.000 dollars, the equivalent of approximately 127,000 euro.