“Hey, Jude, don’t be afraid”, an old Beatles song said! We know you’ve got an insurance! British actor Jude Law rear-ended a cab in London. The crash is going to cost him a bit, since his car is a classic: the Mercedes-Benz SL380 cabriolet.

Jude Law was involved in a fender-bender in central London’s Drury Lane. The crash damaged the rear bumper of the taxi and made Jude’s classy classic crunch upwards. The actor immediately made a phone call, probably getting in touch with his insurance agent. The taxi driver and the actor exchanged details in front of a cafe, but, not a fan of the famous Brit, the man failed to ask for an autograph. 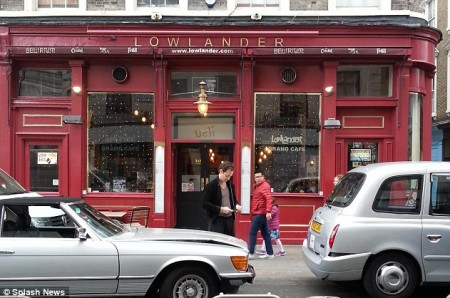 No one was hurt, but the 44-year old seemed deeply affected by the crash that bent his Benz. The vintage Mercedes must have cost him a fortune. He eventually drove his convertible car to a nearby location, to keep it away from the eyes of the curious and the cameras of the paparazzi.

Produced by the Stuttgart-based premium car manufacturer between 1980 and 1985 and powered by a 8-cylinder engine with 215 HP, the Mercedes-Benz SL380 convertible is one of the sweethearts of the brand’s enthusiasts.

The incident is distracting the Young Pope actor from his latest project, Guy’s Ritchie’s “King Arthur: Legend of the Sword”, set to be released in May. He also working on a theater play that will premier this spring in London.