AC Milan and Ghana midfielder, Sulley Muntari, has owned ever since 2013 a garage in Milan with extremely expensive cars, but he was recently spotted driving a Mercedes-Benz Brabus G63 AMG 6×6.

We all know that football players are famous for the “all eyes on me” kind of attitude, when it comes to showing off their exotic pimped cars, AC Milan and Ghana midfielder, Sulley Muntari, has taken this to a whole new level. Apparently, the G-wagon is the most popular SUV among celebrities in Hollywood, but concerning the G 63 AMG 6×6, Dan Bilzerian is the only other celebrity that owns such a monstrous beast. A reason for that might be the price tag, reaching almost $1 million and also the size. 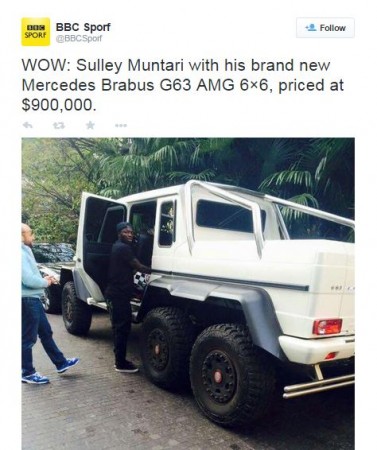 Sulley Muntari is standing in front of his Mercedes-Benz G 63 AMG 6×6, tuned by Brabus, a six wheeled Mercedes-Benz that has a price tag of approximately $900,000. The AC Milan midfielder not only likes spending money on his new toys, but it seems that they are also his main sources of income. His photo standing in front of the beast created quite a buzz on twitter. For instance, Stereo Serie A Radio tweeted that “Milan are in shamble and Sulley Muntari outfitting his car collection!” 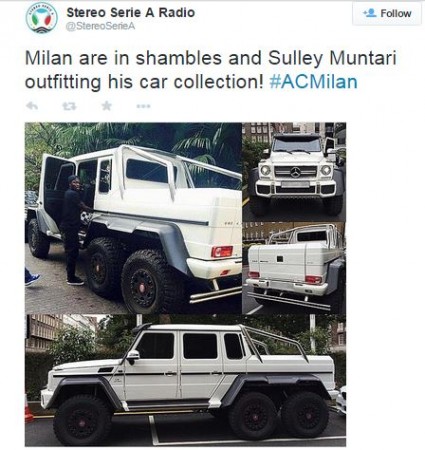