A Mercedes-Benz E-Class became a pick-up in Denmark. PHOTO GALLERY

A Mercedes-Benz E-Class pick-up? As impossible as it may seem, there is such a vehicle. The conversion exempts the owner from high taxes in Denmark.

There is a Mercedes-Benz E-Class pick-up operating in Denmark. It used to be a 300 D sedan of the W124 series. That was how it rolled off the premium car maker’s assembly line back in 1990. But someone thought it would be more useful if converted into a pick-up truck. The transformation also helps the owner, Martin Overgaard, benefit from massive discounts applied in the Northern European state for commercial vehicles. The car has shown up on AutoBild.de.

With nothing to do with the X-Class, whose production was already halted in May, the former classic sedan still bears the elegant front end, but everything has changed from the B-pillar dy backwards. 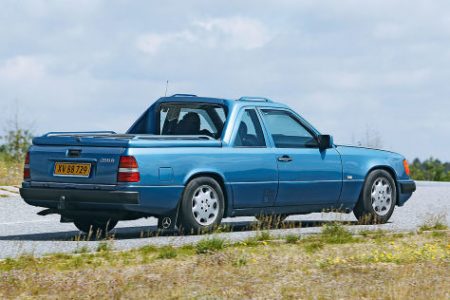 The 63-year old from Arnborg, Denmark, has meanwhile become a collector of converted pick-up trucks. The 1990 former sedan current pick-up is his favorite.

His car, just as other 124 such models, underwent the transformation procedure at Sæby Karosseriværksted near Frederikshavn, in the Nordjylland Region.

Martin is proud that, even though now a commercial vehicle, his car still provides the feeling of comfort and safety typical for the premium brand. Even though the rear windows partially vanished, claustrophobes will not suffer inside the W 124 pick-up. Driving dynamics have not been affected either, the owner claims.

No information on the cost of the conversion, but Martin says that it was complex and costly. It involved quality plastics and metal and lots of hours of work.

The specialists also fitted the bed lid with a complex mechanism for easy operation.

About the Mercedes-Benz W124 before becoming a pick-up truck

The Mercedes-Benz W124 was the first generation that the premium car maker officially designated as the E-Class. It entered production in 1985 and the final unit rolled off the assembly line in 1995. The estate, coupe and cabriolet lived until 1996, 1997 respectively.

The 300 D in question features a six-cylinder diesel engine that delivers 109 horsepower.