A Mercedes-AMG twelve-cylinder G 65 costs at least 218,825 dollars. This is easy enough to attract attention at the busiest intersections of the most exciting city in the world, New York. Lifestyle test between Brooklyn and Manhattan.

It is not always advisable to do exactly what the guides are urgently warning about: strolling around São Paulo with a loosely shouldered backpack, petting the Bucharest street dogs or ordering a chili in San Antonio. Driving in Manhattan is also on this list.

There are no parking spots or they are more expensive than old apartments in Berlin, the average traffic density is only lighter than in Cairo at the rush hour, and left turns are almost always prohibited, except at night or in Brooklyn. Over there, on the other side of the East River, which is not a river against its name, but an inlet between the islands of Long Island and Manhattan, a Mercedes is ready for the tour. A driver brings the car to the Brooklyn Bridge Park in the shadow of the bridge, the meeting point could not have been more appropriate. The bridge, which connects the southern tip of Manhattan with Brooklyn for over 130 years, is the heart of New York. 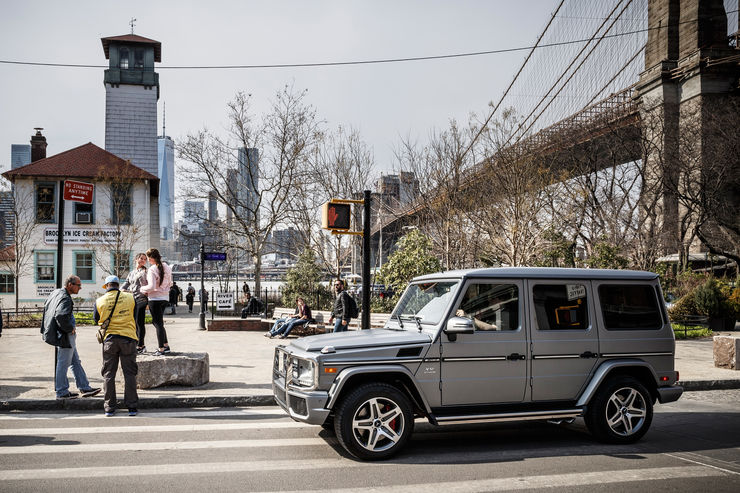 Before making a lasting connection across the East River, New York consisted of Manhattan, Brooklyn was a city on the other side of the water. It was only the bridge that connected the two largest cities in the world, with a population of 2.5 million at the left and right of the capricious East River. Ten years later, by the turn of the century, it was already a million more.

Hipster and orthodox
Today it is said to be 8.5 million people living in the five Boroughs of New York – except for Manhattan and Brooklyn – Queens, Bronx and Staten Island. Not a few have apparently gathered at the park, they whisper over the green areas, sit by the water, sipping coffee to go. A colorful mixture: hipster, and many followers of different religions, which require the wearing of blowing robes, but also normal passers-by are among them. 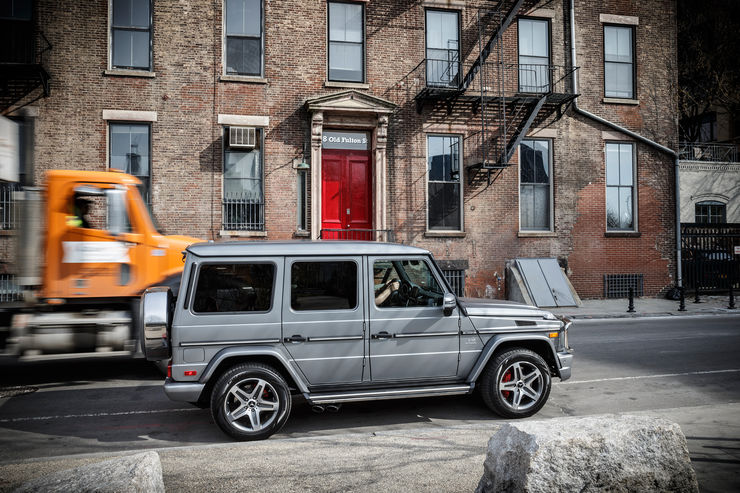 The driver gives a brief introduction into the G 65, essentially advises not to operate the differential locks. No, we do not. And because he is obviously a joker, he tells a passer-by who wonders who is sitting in the conspicuous car, that’s Paul McCartney’s car.

One-way streets in Brooklyn
We are then photographed by at least ten smartphones before we look for the bridge ramp. This is not so easy to find. Part of Brooklyn Heights, the quarter to the left of the bridge ramp, consists of one-way streets, the other of dead-ends. 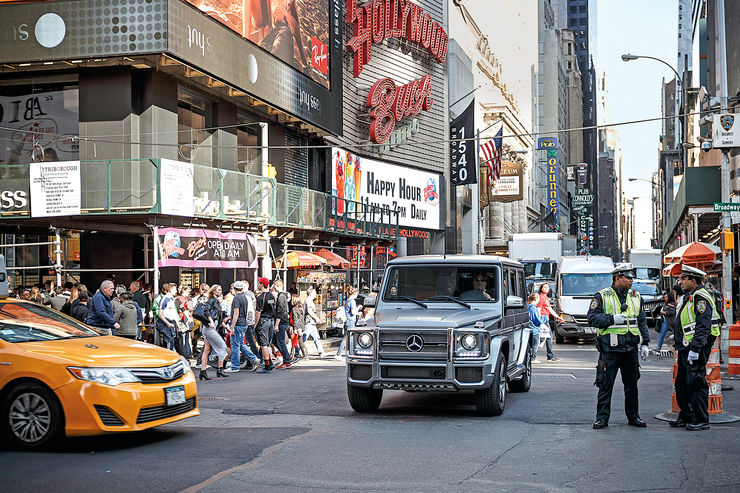 After all, the Navi is standard and at the basic price of nearly 220,000 dollars is not too much to ask for. The satellite radio Sirius XM is also included in Comand Online for the US market. It offers music for every taste, but finding the soundtrack suitable for New York is still impossible. This city is too colorful, varied and chaotic. This is good, as it is not easy for the New York novice to find the right balance between hectic traffic and strolling. The openings for the carriageways in the southern pillars arch over us like the windows of a gothic cathedral. This should not be a coincidence, the bridge builder John August Roebling born in the Thuringian town of Mühlhausen allegedly portrayed the openings in the windows of the Gothic church in his hometown. 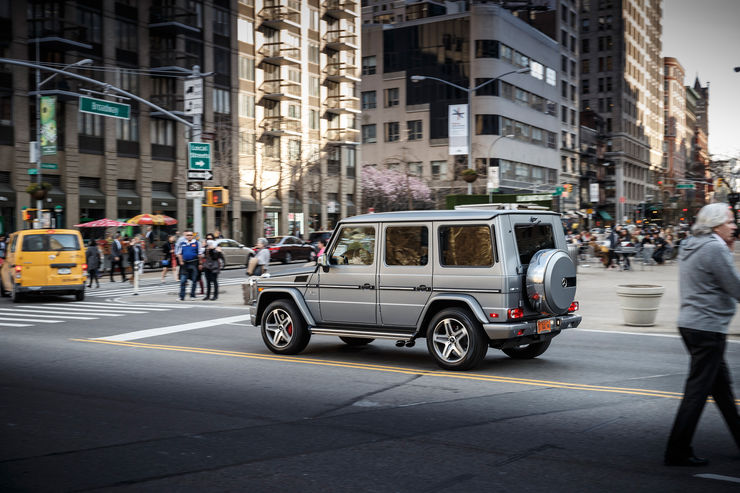 There is so much to talk about the most important bridge in the city, so that several articles could be filled. Roebling died of a blood poisoning before construction began. His son Washington Roebling took over the construction management, but after a long stay in one of the pressure chambers fell on the seabed and afterwards remained paralyzed in a wheelchair. His wife Emily Warren Roebling oversaw the construction of the bridge for her ill husband until the successful completion in 1883.

Meanwhile, we have jammed over the bridge. The six-liter twelve-cylinder of the G 65 whirls with its 621 HP somewhat bored, he has already idled. We turn right onto the FDR Parkway, the abbreviation for Franklin Delano Roosevelt, the US president during the Second World War. 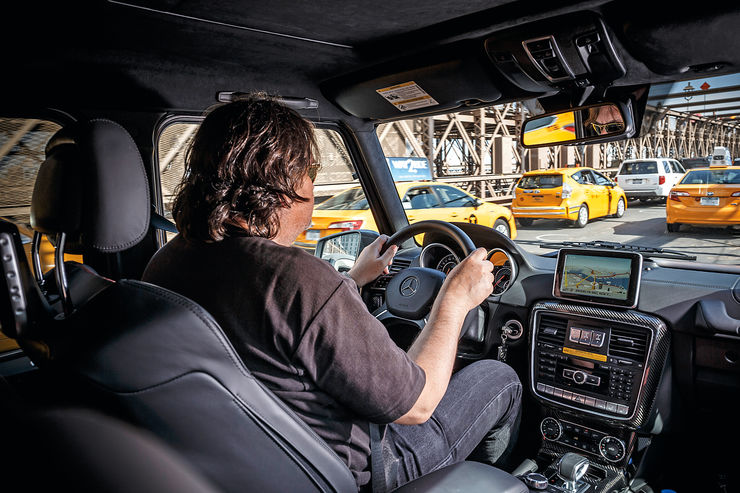 Construction site at Times Square
We follow the parkway north on the East River, Williamsburg, the most hip part of Brooklyn. The domino sugar factory, which has been extensively developed, and an ancient red Pepsi-Cola inscription glimmer over the water. Right off and under the Parkway, we immerse into Manhattan’s immense jungle, sweep away from a Ford Edge patrol car, and soon afterwards arrive at Times Square.

The place between Broadway and 7th Avenue is half building site, half tourist magnet. People everywhere flock in front of theaters, museums and similar places of interest. Small Tourist tip on the edge: Never buy one of these New York passports, the preferred entry into sights is promised, but everyone else in the queues have the same passes. 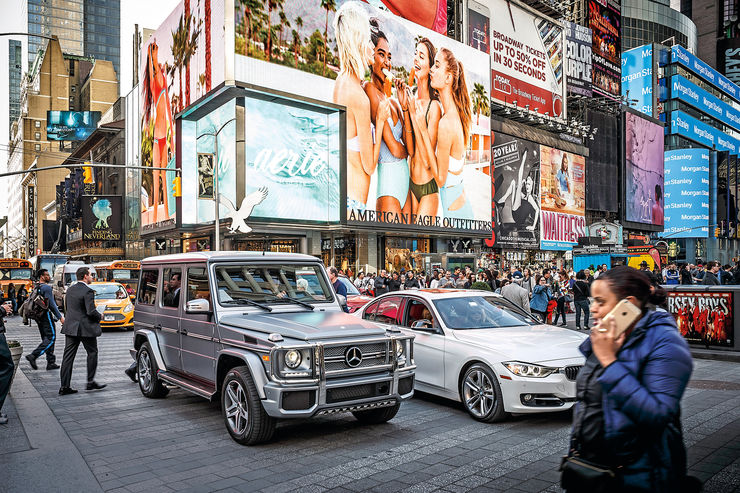 We are moving around Times Square, the Mercedes is catching the eye, and Paul McCartney does not know. Drive down Fifth Avenue to Lower Manhattan, past the Empire State Building and Madison Square Park. The sun sets behind New Jersey. The driver is waiting for the car at the hotel. Where he was going now, I ask. To Atlantic City, roulette heaven. No idea if he is serious, after all, that is the right soundtrack for me.