For all nice things, there is always an end. The 6.2 V8 AMG engine was the most powerful normal V8 aspirated in the world. Mercedes-AMG would not comply to the principle less is more, but they were forced to, due to fuel consumption and future emission regulations.

And according to the AMG tradition, the new 4.0 litre biturbo V8 engine from the Mercedes-AMG C 63 S is more powerful and louder than the old 6.2-litre normal aspirated engine from the former C 63.

Especially, the sound is absolutely fascinating and is not produced by the resonators or by the audio system. Three flaps mounted on the exhaust system produce a fascinating sound, depending on the driving program you choose. In the Sport and Sport+ programs, the sound becomes more baritonal and more intense. Sorry, BMW M3 or Audi RS4, but this time, the Grammy goes to the Mercedes-AMG.

On the other side, we have a calm story. In 1993, a discrete six inline engine was launched under the bonnet of C 36 AMG. Four years later, based on the same W202 generation, Mercedes has replaced the six in line with a V8. 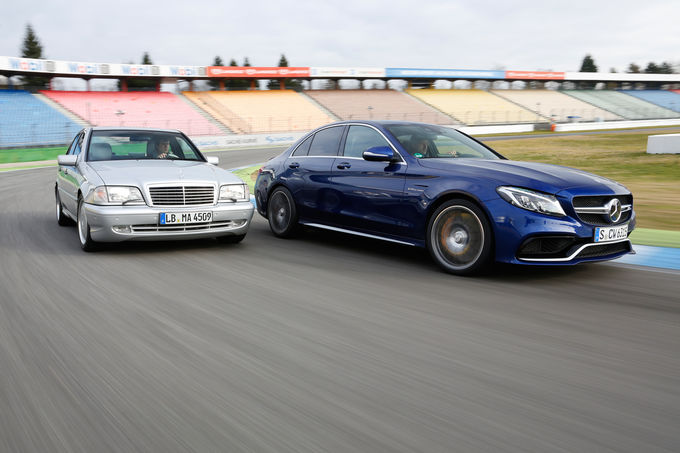 Although the lowered chassis with reinforced torsion bars and gas filled shock absorbers assures  a relatively firm drive train, the C 43 AMG was not really a purely sports car and the old recirculating ball steering was undecided.  On the other hand, the interior was fit at the Mercedes standard, with a fine sport touch: two tone leather, sports seats, white dials and carbon fiber imitation inserts.

Between the C 43 AMG and the modern C 63 AMG, there is an 18-year gap, but these 18 years mean the world. We talking about two different eras. In 1997, AMG had a status of being the Mercedes house tuner and worked with finished products. Today, Mercedes-AMG is a 100 % Mercedes division and works together with Mercedes from the beginning in the development process. 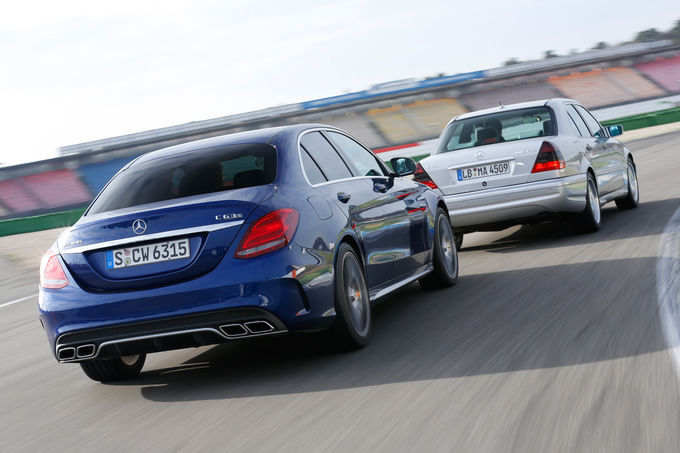 But the power is not all. The C 63 S has an electronically controlled rear locking differential and a dynamic engine mount, plus the extra Race mode, ceramic brakes on the front axle and Cup tyres.

The new V8 is like a hammer. The press kit mentions the ”optimal responsiveness” and the ”spontaneous reactions” of the gearbox. We agree with the fast response of the engine, but the revised automatic gearbox is not as fast as we expect. But the traction impressed us just like the flow of power did.

You can read the full article on auto motor und sport website.