Baby Benz grows up – The history of the Mercedes A-Class

In late 90s, the now no.1 premium car brand in the world decided to downsize before any other rival and unveiled its new entry-level pioneering model: the Mercedes A-Class – internal designation W 168. This move spawned a success story that still continues today, with the third generation now on the market and the fourth one launching on February 2.

1997: The first generation of the baby Benz, the Mercedes A-Class, was unveiled in March 1997 at the Geneva Motor Show. It quickly stole the show, debuting alongside no less than twenty technical innovations that rewritten the rules in the compact segment. Probably the most significant departure from tradition was the revolutionary new bodyshell based on the sandwich principle.

Surviving for two of three (soon four) generations of Mercedes’ entry-level model, it was characterized by an actual cavity between passenger compartment and floor plate, with the engine mounted partially under the floor pan – an ingenious solution which helped the A-Class match the standard of the C-Class mid-size saloon in therms of interior accomodation.

And space was not the only frontier, as the Mercedes A-Class also mimicked the versatility of a bigger family MPV with a choice of 72 different seating variations, thanks to the option of a removable front passenger seat that allowed to transform into a four-, three-, two- or even a single-seater. The boot volume was also revolutionary given the A-Class’ diminutive size: 390 to 1340 litres and even 1740 litres without the front passenger seat.

Mercedes A-Class caught the attention of the international media in November 1997, after motoring journalists from Sweden tipped over an A-Class in the so-called “moose test”. Following the huge safety scandal that soon emerged, Mercedes-Benz has equipped in only a matter of months the A-Class with a modified chassis and took the historic decision to fit the Electronic Stability Program ESP® as standard – not in only for the A, but also for all other models in the Mercedes range.

In February 1998, motoring journalists from all over Europe were invited to Barcelona to test the modified A-Class. Razvan Magureanu, our editor-in-chief, has been one of 1,000 journalists invited to the event, witnessing first hand the increased safety levels and newfound stability at high speeds. A-Class passed with flying colors the infamous test, now a standard testing procedure for all new cars. READ BELOW THE EXCLUSIVE INTERVIEW with Juergen Hubbert, former Daimler executive in charge with technical development.

In 2001 Mercedes decided to apply numerous modifications, some of them very extensive, to the A-Class. Among the novelties was a long wheelbase version extended by 170 millimetres (V 168). Other changes included the adoption of the large-format windowbags, first fitted by Mercedes-Benz in the S-Class and then available for the A-Class as an option. 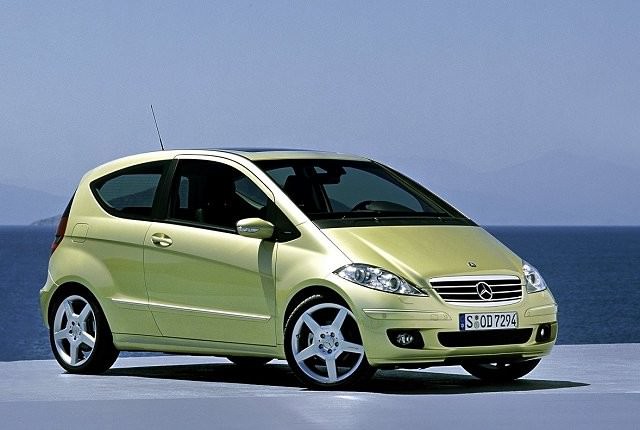 Following the great success of the first generation, sold in nearly 1.1 million copies up until May 2004, Mercedes-Benz revealed the second generation of the A‑Class in spring 2004. The baby Benz saw the range expand with a brand new two-door version (code C 169) joining the four-door model (internal code W 169). The long wheelbase variant was axed in favor of a genuine MPV and the first additional member of the compact family of Mercedes cars, the 1st generation B-Class (code T 245). Launched in 2005, it was based on the same sandwich principle platform as the Mercedes A-Class, although in larger wheelbase form, as expected.

In late 2011, Mercedes launched the third generation of the A-Class (W 176), which ditched the sandwich architecture and adopted a classic modular platform with transverse mounted engines and front-wheel drive: the MFA platform, that also underpins the next-generation A-Class in a heavily updated variant.. Beyond a second generation B-Class MPV (code W 246), also revealed in 2011, Mercedes-Benz launch an aggressive expansion campaign which saw the compact cars family from Stuttgart grow to include five distinctive body variants: the CLA (C 117, 2013) and CLA Shooting Brake and the GLA (X 156, 2013).

2018: Fast forward to today and we are only two days apart from the debut of the all-new Mercedes A-Class. Based on the MFA II platform, revised to decrease weight and increase efficiency, the new generation of the baby Benz is keen to redefine modern luxury in the compact class. The ace up its sleeve is the interior design, set to become the segment standard in the are of entertainment and gagdets. READ MORE ABOUT THE NEW MERCEDES A-CLASS IN THE LINK BELOW.