It seems like Mercedes-Benz was born under a lucky star. The current three-pointed star was created in 1925 when the Mercedes-Benz logo was patent registered .

The stories of the Mercedes star and the laurel crown started quite separately from one other. On 6th August 1909, 17 years before the well-known merger, it was submitted an application to have the „Benz” lettering enclosed by a laurel crown and it was registered to the Imperial Patent Office.

The birth of an icon

On 18th February 1925, both brands registered their brand new logo, meaning Daimler’s Mercedes star in Benz laurel crown. It was a symbolic action in anticipation of the merger, that officially began on 28th June 1926.

In the beginning, the Mercedes star was used without the surrounding circle, but the design of the new logo featured a circular shape with the central Mercedes star remaining the main element. Basically, the laurel crown was taken from the Benz logo, while the three-pointed star from Daimler – Motoren – Gesellschaft. In the new logo, the two laurel branches embrace the three-pointed star, while the roots are next to the letters “B” and “Z”. 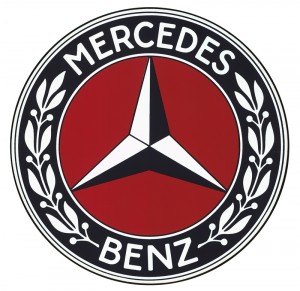 If the elegant form of the trademark was mainly use for print, the Stuttgart-based manufacturer needed a free-standing three-pointed star for Mercedes-Benz model. Thus, they created the vivid star with a surrounding ring, an emblem that you can see today on the hood of the Mercedes-Benz S-Class, for instance.

Ask anyone on the streets about the three-pointed star and they will recognize it. Emblems such as the Mercedes-Benz star or the Coca-Cola bottle will be immediately associated with everything they stand for.