600 kilometers in 3 days, onboard a classic – The Arlberg Classic Car Rally

The Arlberg Classic Rally has made its debute in 2010 and has fascinated spectators and participants just as much. The Rally welcomes automobiles manufactured before the year 1975 and its route stretches over the Alpine roads. No less than 40 classics built before 1939 took part in last year’s edition. 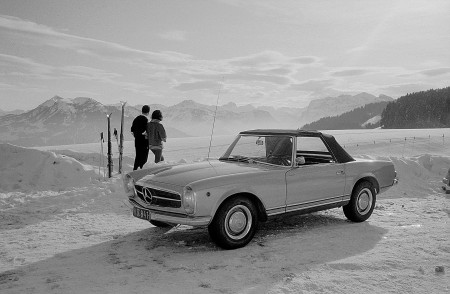 This year, we get the chance to see the Mercedes-Benz SSKL from 1929 put through its paces along the winding roads. It’s a car with an impressive background. The model joined the Arlberg Race, an event held on the Arlberg road back in 1927. The same road is today part of the route for the Arlberg Classic Car Rally.

Mercedes-Benz is the main sponsor of the event and it’s throwing its best weapons in the fight. Both the SL model series W 113, called the “Pagoda”, and the SLC from the C 107 model series were triumphant in international rallies in the 1960s and 1970s. The field for the 2016 Arlberg Classic Car Rally will include several examples of the Mercedes-Benz 300 SL from model series W 198 (gullwing-door coupé and roadster).

The 120 classic automobiles manufactured between 1908 and 1975 will start that journey in the afternoon of 30 June. The Bavarian castle of Neuschwanstein will be a breathtaking sight during the trip.

The brand ambassador of Mercedes-Benz Susie Wolff is going behind the wheel of a classic at this year’s Arlberg Classic event.