60 years ago: Second US championship for Paul O’Shea and Mercedes

Time for a new history lesson. 60 years ago, racing driver Paul O’Shea was awarded the “National Sports Car Champion” of the United States title, for the second year running. This was at the same time a triumph for Mercedes-Benz, because since 1955 the racing driver born in 1928 had been competing with works support in the 300 SL production sports car (W 198).

In all, O’Shea competed in 14 races in 1956. In October, the racing driver clearly led the standings for the informal title of “National Sports Car Champion“ with 10,500 points. Despite winning the last race of the season in Palm Springs, California, on 4 November, Carroll Shelby was unable to wrestle this position away from him.

Paul O’Shea had a great start to his second season as a driver backed by Mercedes-Benz: On 21 January 1956, the Sports Car Club of America announced last season’s winners of the racing classes in the SCCA National Sports Car Championship. O’Shea had won the “D Production” racing class, and just a few weeks later he was informally named US sports car champion by the American motorsport specialist media due to having scored the highest number of points. At almost the same time, racing manager Alfred Neubauer was arranging the vehicles for the current season in Stuttgart: “Due to the good results of our 300 SL sports cars in the races organised by the American SCCA, the Board of Management has decided to sell the two vehicles stationed in America and to send two new 300 SL vehicles to the USA for further use by our central office“, Neubauer wrote on 27 January 1956.

The choice fell on a 300 SL with ivory paintwork and red leather, and a second 300 SL painted silver grey with blue leather. Mercedes-Benz decided against vehicles with aluminium bodywork: The company wanted the works racing cars to remain on a technical par with the American customer-sport vehicles. The two 300 SLs were ready right on time for the important “National Races” on the racing calendar of the SCCA.

Mercedes-Benz backed O’Shea in the US sports car races to promote the sales of the company’s sports cars in the important export market. This reflected the maxim that a brand instantly benefits from racing victories by selling production cars (“win on Sunday – sell on Monday“). Accordingly, the representatives of the company closely monitored in what cars the race spectators arrived: At the Cumberland National Sports Car Race on 20 May 1956, Customer Service Inspector Victor R. Gross counted around 100 Mercedes-Benz passenger cars in the parking lot: “They were mostly sports cars.“ Even more impressive was the result of the parking lot analysis of the 12 Hours of Sebring Race on 24 March 1956: “Among the approximately 15,000 cars of the spectators were an estimated 300 or so vehicles of our 300 SL model, plus many hundreds of vehicles of the 190 SL model.“ 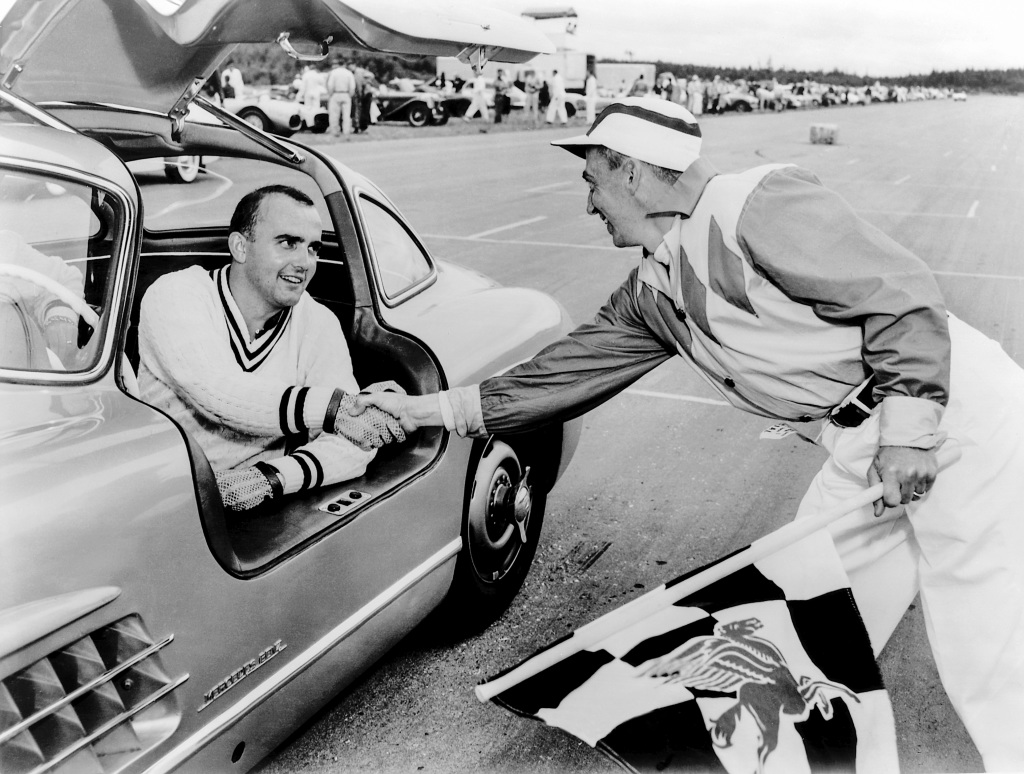 Paul O’Shea was supposed to win American sports car races for Mercedes-Benz again in the 1957 season. In this context, Mercedes-Benz also held out the prospect to O’Shea of being hired as a consulting engineer by the US subsidiary of the corporate group. However, the Stuttgart-based company wanted to use the new 300 SL Roadster for the 1957 season, and not the “Gullwing” Coupé. The new car, as Alfred Neubauer reported on 27 November 1956, would no longer start in the D Production class, but rather in the unlimited D Modified class. The reason for this on one hand was that Mercedes-Benz was consequently able to compete in races even before 150 vehicles of this model had been built. On the other, the displacement limits had changed, so that the 300 SL would have had to start in 1957 in the C Production class for vehicles with a displacement between 2700 and 3500 cubic centimetres, whereas in the D Modified category, the displacement continued to be limited to between 2000 and 3000 cubic centimetres.

This gave rise to the Mercedes-Benz 300 SLS, a 300 SL Roadster (W 198 II) “specially prepared with a high output and low weight“ (Nallinger). The special versions, of which two were built, weighed just 970 kilograms (production version: 1330 kilograms) and had an engine output of 173 kW/235 hp (production version: 158 kW/215 hp). From the outside, the 300 SLS was identified by the lack of bumpers, a specially shaped cockpit canopy with air intake slot, a slim racing windscreen and a roll bar behind the driver’s seat. The plan of the Stuttgart strategists worked like a charm: Paul O’Shea won the title of US Sports Car Champion for the third consecutive time in 1957.