Very soon Mercedes-Benz will pull the curtain off the plug-in hybrid version of the compact A-Class. The international media was given the necessary information during a preview in Stuttgart.

To start with the bad news: the name of the plug-in A-Class is not yet known. It is clear, however, that it will be a name in the style of the already known Mercedes plug-in hybrids. An A, followed by three digits and ending with an “e”, in which case the latter must distinguish between the plug version and the regular petrol and diesel variants. Autocar magazine predicts the final name will be Mercedes-Benz A 250 e.

The fact that it is not yet officialy known exactly what the figures will be is due to the fact that Mercedes does not yet want to say how much power the gasoline engine in the electrified A-Class delivers. It is clear, however, that the model the 1.3-liter four-cylinder engine that can also be found in the A 160, A 180 and A 200. The block is connected to an electric motor that delivers 75 kW (102 hp) and 300 Nm. The battery pack has a capacity of 15 kW and is located under the rear seat, while the charger gets a place under the trunk floor. That means that the A-Class surrenders the space underneath the floor, which amounts to around 70 liters. Little changes, however, to the regular luggage space. The floor is a few centimeters higher than with a regular A-Class, but the load floor is also almost flat when the rear seat is folded. The added technology does have an effect on the tank capacity, which decreases with 10 liters, to 35 liters. The exhaust must also give way: it does not end at the rear bumper, but at the height of the front seats.

The small losses, however, must be more than compensated for by the possibility of electric driving. An official range is not yet known, but Mercedes indicates that the car can run “at least 60 km” without the combustion engine. During a short driving session under practically ideal conditions, that number seems feasible and the car promises an electric range of 62 km after fully charged. The compact Benz quickly moves from its place in electrical mode. The motor will only start when the pedal is pushed through the kickdown resistor or when the power is used up. 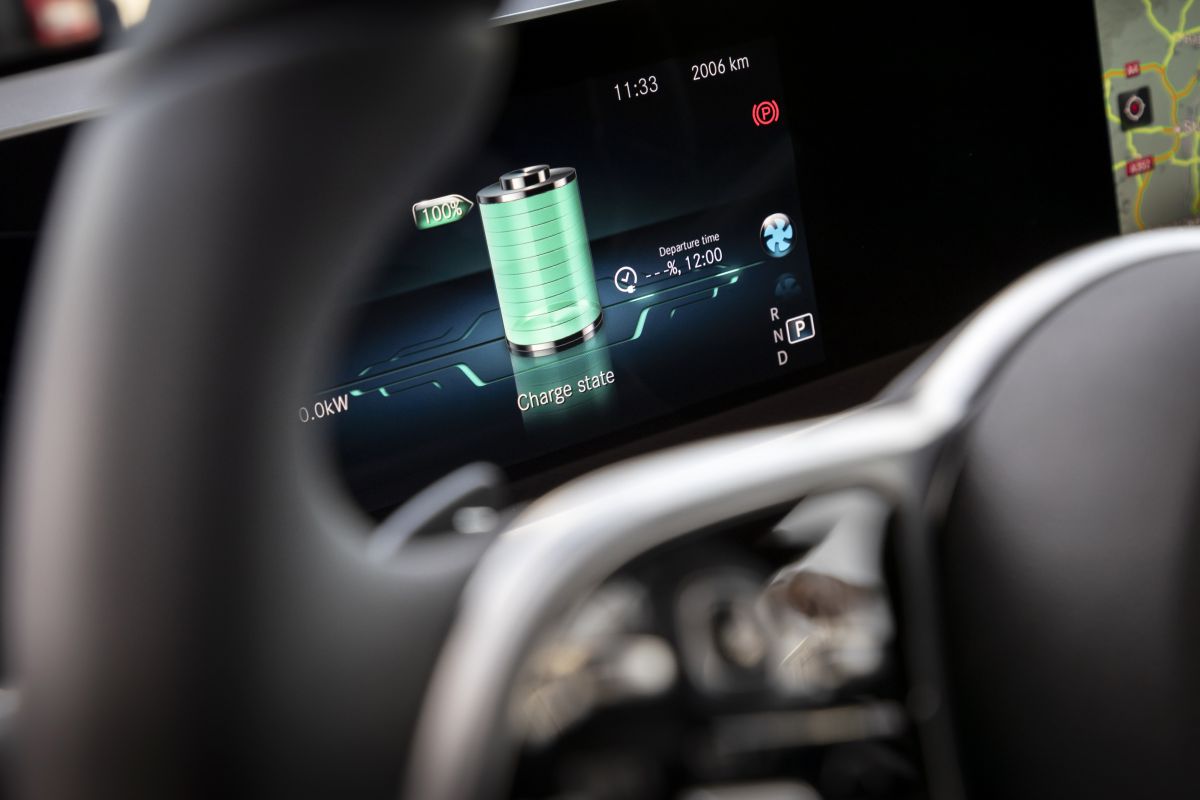 Behind the tailgate, which is an exact copy of the fuel filler flap on the right-hand side of the car, there is a charging port suitable for the well-known Combo plug. In addition to a regular Type 2 cable, the CCS plug of a fast charging station can also be used, which is quite special for a plug-in hybrid. According to the Mercedes engineers, depending on the charging station used, the full charge of the battery takes from 40 minutes to an hour and a half.

In the interior, it is a few small details that distinguish the A-Class with electrical support from its traditionally driven brothers. The only physical detail is the cover that replaces the start button of the start-stop system, the rest is digital. When starting, the car displays a large “EQ” logo, because that is, after all, the label under which Mercedes promotes its electrified fleet. 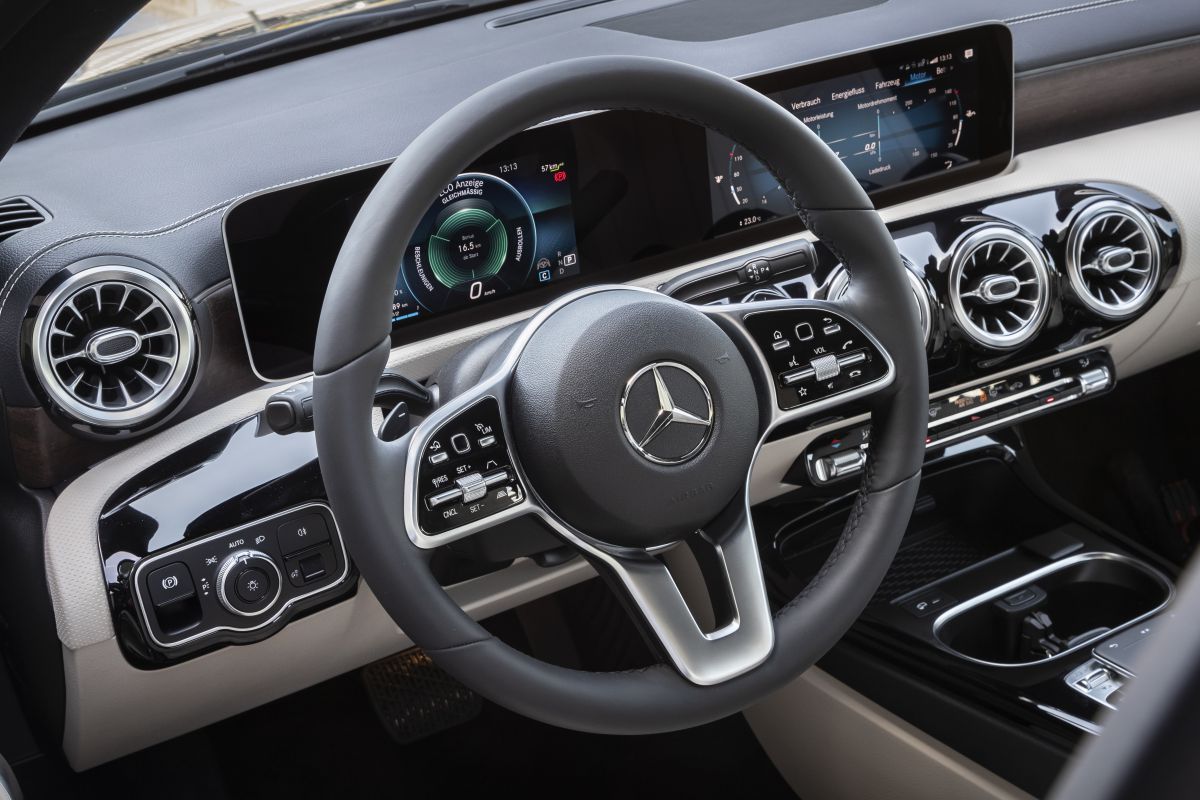 The PHEV also has special driving modes. In addition to the usual “Comfort” and “Sport” there is a mode to drive electrically for as long as possible, which as long as the power supply can go as fast as 140 km / h. In Comfort too, the car will run on electricity as much as possible, but the circumstances will be taken into account more. As we often see with this type of car, the A-Class takes into account the navigation destination entered. If the last part passes through a city, the car itself can “think” the available electricity must be saved for that part of the journey.

The shifters behind the steering wheel are apparently identical to those of any other A-Class, but have a dual function here. When the internal combustion engine is running, it can be switched on as usual, but if that is not the case, they serve to set the degree of regenerative braking. However, this can also be done automatically by the car, which includes the radar of the adaptive cruise control. 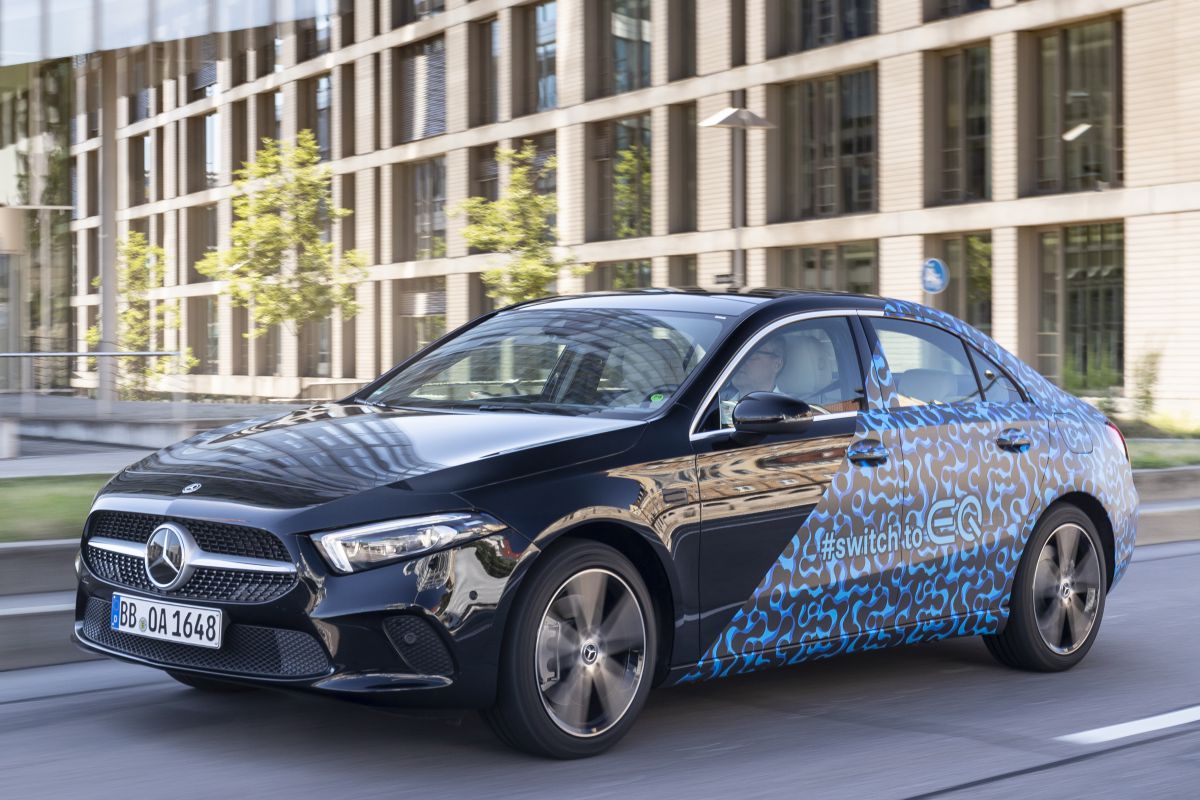 Mercedes-Benz is fully committed to plug-in hybrids in the coming period and wants to have no fewer than 20 different model variants with such a powertrain next year. Two of them will be presented soon, because in addition to being a hatchback the A-Class PHEV will also be available as a sedan from the get go. A B-Class with this powertrain has already been announced and although the plug-in hybrid CLA has not yet been confirmed, Mercedes makes no secret that that car would be a “very logical” addition to the range. So count on that and then the Shooting Brake version too, as the logical next step.