Mad blizzard. High snow. Extreme frost. A Mercedes-Benz C350 Coupe 4Matic and a snowboard. This is how the story of adrenaline begins!

What is the use of a 4-wheel drive unless you can push it to its limits?

Professional snowboarder Rob Kingwill, towed by the Mercedes-Benz C 350 Coupe 4Matic, makes his way across snow dunes in the US winter sceneries. The light drag, propelled by the Benz, flies around and scrapes the bright white natural cover of the land in a video that proves there is nothing like the 4Matic. 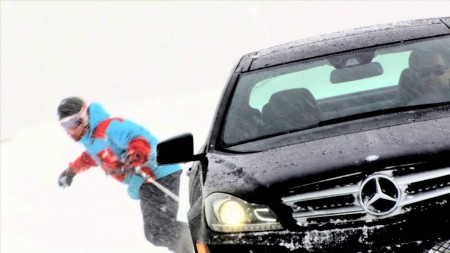 Throwing the snow powder up in the air, Rob Kingwill lets the tow go for an instant and just rises in a glorious jump, right over a Mercedes-Benz G-Class, like an aeroplane, in an attempt to show that the sky is the limit!

The following video was filmed with professionals on a closed course. It is dangerous and should not be attempted.

“This was so fun to be a part of! The 4MATIC all wheel drive in the C 350 would just lock on and launch me into that jump, while we were filming. Legit technology. Snowboarder approved!”, pro snowboarder Rob Kingwill tells of the remarkable experience of flurries and speed.

With red faces burning because of the frosty weather, all those involved were spellbound at the end of the day. 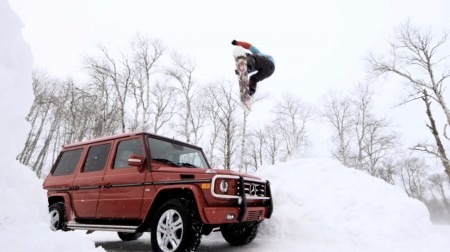 “I had such a blast driving the C 350 4MATIC, and working with Rob Kingwill and everyone else while filming this. I was truly impressed with the performance of the car in those conditions”, says stunt driver Kevin Waterman, the one who drove the C for the video shooting. Waterman has built a reputation by drifting, precision driving and two-wheeling in “Now You See Me”, “Dawn of the Planet of the Apes” Hollywood motion pictures.