40 refugees start the internship at Daimler

The “bridge internship” program has begun and all is going according to plan. Forty refugees from Afghanistan, Syria, Pakistan Eritrea, Gambia and Nigeria who started the 14-week program will qualify them for the German labor market.

Forty refugees between the ages of 20 and 51 have started their new intern jobs, a program developed by Daimler in cooperation with the German Federal Employment Agency and Job Centers. Successful participants can eventually be placed in other companies, temporary agencies, and professional training programs.

“The best way for people to integrate is at the workplace. Doing things together creates understanding for one another. 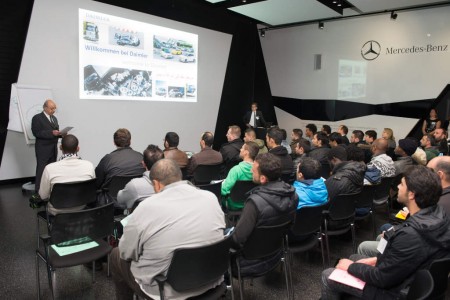 That is why we are delighted that many colleagues have expressed a willingness to mentor the ‘bridge interns’. Discrimination and racism have no place at Daimler”, said Michael Brecht, Chairman of the General Works Council at Daimler AG.

The German Federal Employment Agency will finance the first six weeks of the program and Daimler will be paying for the last eight. Therefore, the interns will benefit from compensations for the daily work time of three and a half hours according to the minimum wage law in Germany.

Mercedes-Benz is also paying for German lessons to help the asylum seekers integrate as fast as possible. The “bridge interns” work on the morning shift, starting 6:00 a.m. Three hours and a half later they will be attending their German courses. They are divided in small groups of 10 people and given the necessary assistance.

The first ‘bridge internship’ session has started at the Mercedes-Benz plant in Stuttgart-Untertürkheim. The program is set to extended to other locations in the coming weeks and months. Internships for several hundred more refugees are planned at other company locations.