American Bryce Ronsonet saved this 300 SD W126 and turned it into an off-road Mercedes S-Class for rallies by investing quite a bit of money and time.

American Bryce Ronsonet had a brilliant idea. Starting with a scrapped Mercedes 300 SD W126 from 1982, Ronsonet restored it in an original way by turning it into an off-road Mercedes S-Class that can compete in rallies.

Ronsonet bought this Mercedes 300 SD W126 for only $ 540. The low price is explained by the fact that the car was damaged on the left front. The new owner “restored” the car in an original way in the sense that he no longer bought a new bumper but simply gave it up. Then, the left wing and hood were straightened and rebuilt but the operation failed miserably because the left headlight is relatively crooked in its housing.

It only took a week for the American to achieve this spectacular transformation. I said spectacular because you don’t see an S-Class for off-road every day. Ronsonet focused on changing the suspension and fitted new shock absorbers and handmade rims with 33-inch off-road tires bought on Facebook! They cost only $ 50, but because of the size, the wing passages needed to be remodeled. Here Ronsonet was not very artistic because the wheel arches are cut quite rudimentarily.

Instead of replacing front bumper because it reduced the approach angle, Ronsonet mounted a bull bar that also acts as a shield for the engine. The registration number was caught by this bull bar, a sign that the American also drives out on the streets.
He also mounted a roof rack to which he attached additional LED lights.

Ronsonet has changed almost nothing at the 3-liter five-cylinder turbodiesel engine that was available on the US market exclusively on the S-Class. He only changed the oil and installed an original exhaust system which is actually a pipe coming out of the hood. The shorter exhaust route could benefit the power developed, but Ronsonet does not know if the engine is now more powerful than the 121 HP displayed by the production model. But he doesn’t seem to care. 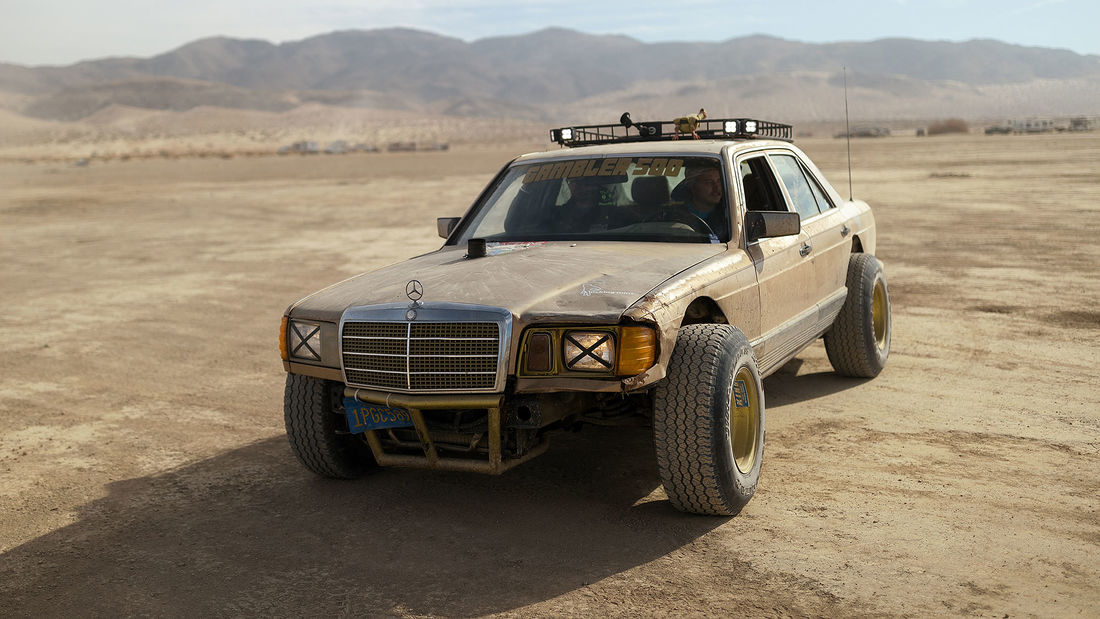 The whole modification operation cost only 800 USD, and the car also received a new name – Golden_cedes. It has its own Instagram channel with 3000 followers. Ronsonet hopes to find some sponsors to upgrade the car. But he doesn’t consider it a drama if sponsors don’t show up. “Then it will remain as it is,” declared Ronsonet to auto motor und sport magazine.

You definitely don’t need money to have fun! “That is one of the central sentences that Bryce Ronsonet says in an interview with photographer and car influencer Larry Chen. The two Americans recently met at the hardcore rally” King of Hammers ”

The first appearance of this off-road S-Class was at the King of Hammers off-road rally. But the car would also fit perfectly in the Gambler 500, an off-road rally with cheap cars that began in Oregon in 2014. The Gambler 500 logo already appears on the car’s windshield.