Mercedes 500E celebrates 30 years since its launch. The commemoration was made through a film made by Porsche that developed the car for Mercedes.

Mercedes and Porsche are formidable rivals but sometimes common interests have led to unique situations. So was the case of the Mercedes 500E. Mercedes needed a sports limousine and Porsche was going through a crisis and needed to complete its production capacity in Zuffenhausen.

In 1988 Porsche won a development contract for “design and experimental series development of the base type W124”. The car had to be equipped with the 5-liter V8 engine from the 500 SL.

Because the Mercedes 500E simply did not fit on the production line of the W124 in Sindelfingen, which was too narrow. The Mercedes 500E was 56 mm wider and 23 mm lower than the normal W124. At Porsche the project was called Project 2758.

The 500E’s body was produced in the old Reutter brick building that belonged to Werk 2 in Zuffenhausen. In the past, the bodies of the 356 and 911 were produced here. The production line was free at that time and wide enough for the body of the 500E.

The project manager from Porsche was Michael Holscher, who worked at Porsche from 1982 to 2016. Regarding the road taken by the bodies twice between Sindelfingen and Zuffenahusen, he says: “From a logistical point of view, sending the old parts back and forth was a big challenge. After all, the relevant parts had to arrive at the right place at the right time”. 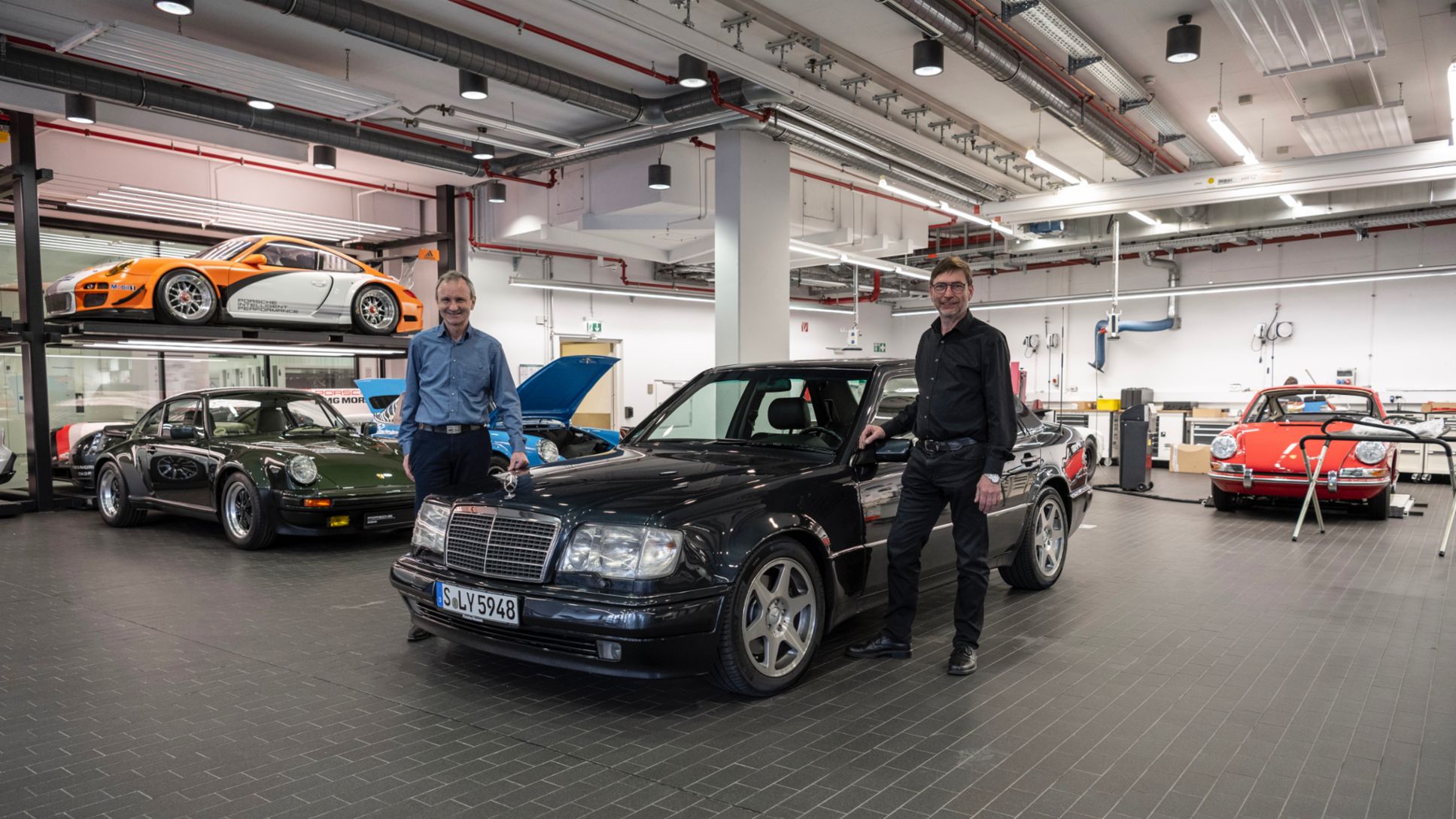 The operation was not simple because at the beginning 10 cars were produced per day but due to the demand, the production was doubled to 20 cars per day. The whole production process lasted 18 days. Porsche produced a total of 10,479 Mercedes 500E units from the spring of 1991 until April 1995.

Few know that the Mercedes 500E was a car with only four seats because due to the wide differential there was no room for the seat suspension in the middle of the rear bench. 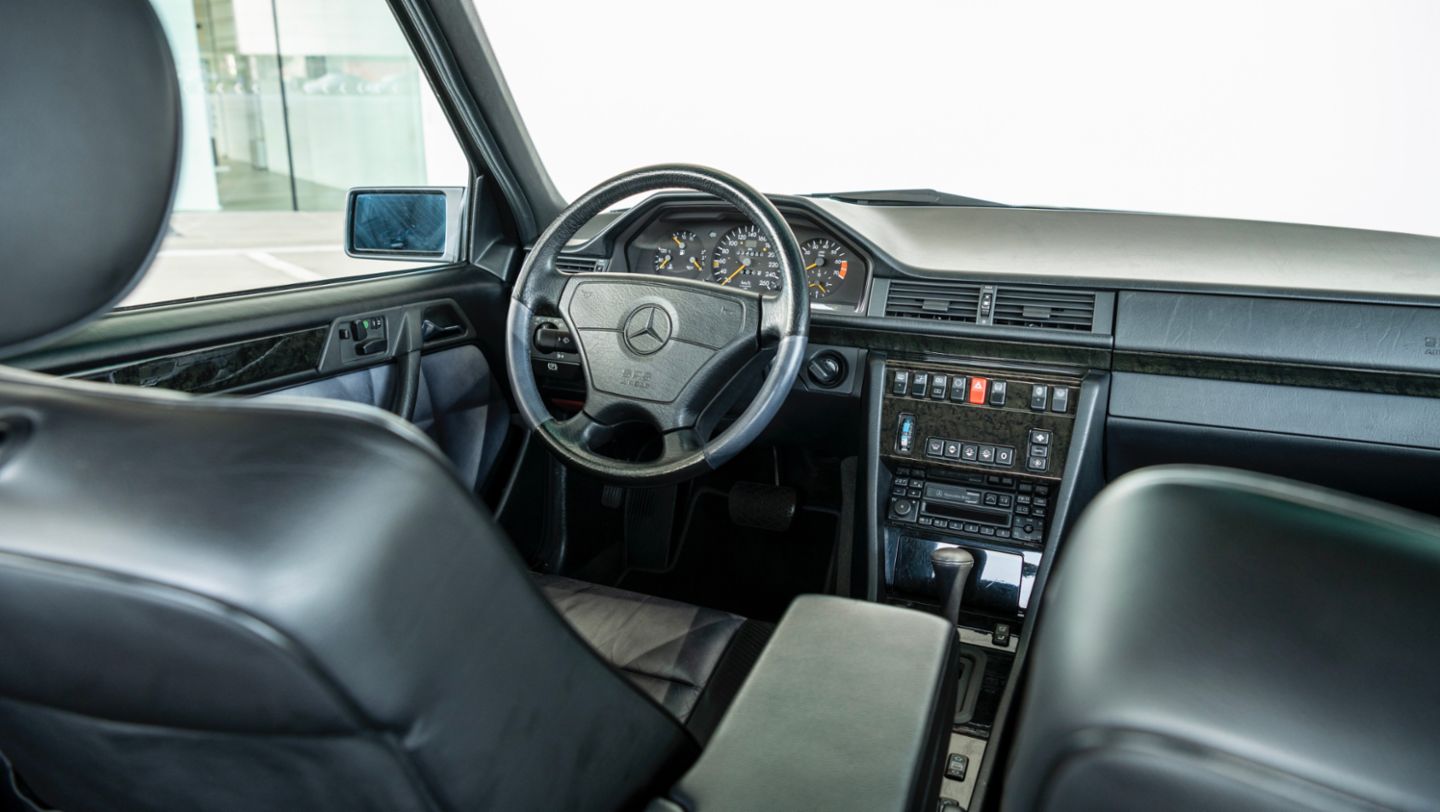 Mercedes was responsible for the design and aerodynamics and Porsche with the chassis, acoustics and vibration, electrical part, exhaust system and engine peripherals. Porsche installed a completely new electrics with a CAN BUS system which at the time was an uncharted territory for Mercedes and Porsche.

Development work for the Mercedes 500E took place at the Porsche center in Weissach. Michael Monig, who worked for Porsche for 35 years, was responsible for creating the prototypes.
To achieve a better weight distribution, the battery was moved from the engine compartment in the rear right of the luggace compartment. The brake and exhaust system were also significantly modified while the air intake of the V8 engine was achieved through the gap surrounding the two headlights.

Monig said: “Thirty years have passed and a lot has happened in the automotive industry in this time yet even today the 500E has nothing to hide. Its handling is magnificient. The longitudinal acceleration is excellent, the brakes are outstanding and iti is a pleasure to drive this car with its dynamic character”.

Mercedes 500E has a 5 liter V8 engine which develops 326 HP and 480 Nm. The power is transmited to the rear wheels though a four-speed automatic gearbox. It accelerates from 0 to 100 km/h in 6.1 seconds while the top speed is electronically limited to 250 km/h.