Mercedes-Benz pits one of its most affordable models, the 2015 CLA 4-door coupe, against one of the most expensive cars ever to be graced by the three-pointed star, the $30 million W196 Juan Manuel Fangio’s race car.

Admitting the spot may not entirely depict the actual bloodline of the CLA, the idea behind the new campaign is nevertheless enticing. Yes, similarities don’t get past the badge itself, but the very chance of admiring the CLA running alongside its graceful forebear is worth every second of it.

Baby brother to the segment-busting CLS – the car which launched the 4-door coupe craze more than a decade ago; the CLA costs as little as $31,500 in the US. The base version, CLA 250, boasts a 2.0 liter turbocharged petrol engine, churning out 211 HP.

What about the famous Silver Arrow? Well, the Mercedes-Benz W196 grand-prix race car sold for $29,650,095 at a Bonhams Goodwood auction, two years ago. For that sort of money you get the 2.5-liter straight-eight open-wheel Formula 1 car driven by Juan Manuel Fangio to win the 1954 German and Swiss Grands Prix (chassis number 00006/54). 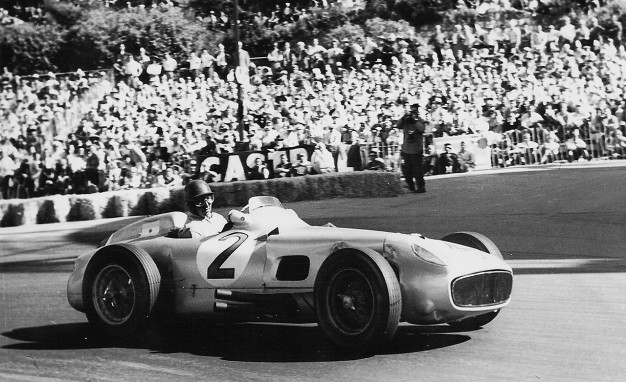 Front mid-engined, the famous Mercedes-Benz W196 had its long longitudinally mounted engine placed just behind the front axles instead of over them to better balance front/rear weight distribution. Dry weight was kept in check with the help of a welded aluminum tube spaceframe chassis carrying ultra-light Elektron magnesium-alloy bodywork.

Its 2,5-litre desmodromic valves straight 8 engine delivered 257 bhp and used such novelties as direct fuel injection from the Messerschmitt Bf 109E fighter, a considerable advantage over the carburetted Formula 1 cars of the time.