2021 Mercedes S-Class completely undisguised: This is it!

Photos escaped on the internet before the official presentation
Razvan Magureanu, May 12, 2020
2.96K 1
Home Auto news 2021 Mercedes S-Class completely undisguised: This is it!

The first photos with the 2021 Mercedes S-Class escaped the internet. The seventh generation S-Class will be available in autumn 2020 and will retain its role as a technology vector. The highlight will be the new multimedia system with the new huge screen of almost 20 inches that will occupy the entire center console.

The first photos with the 2021 Mercedes S-Class escaped on the internet before the official presentation. In the front part, you can see the face of a prey animal taken from the new CLS and from the compact range, with the headlights going down obliquely towards the radiator grille. In the center of the radiator grill we notice the radar for the assistance systems.

In the rear, the taillights have a sharp shape joined by a chrome bar, while the elegant exhausts are certainly false as with other Mercedes models. 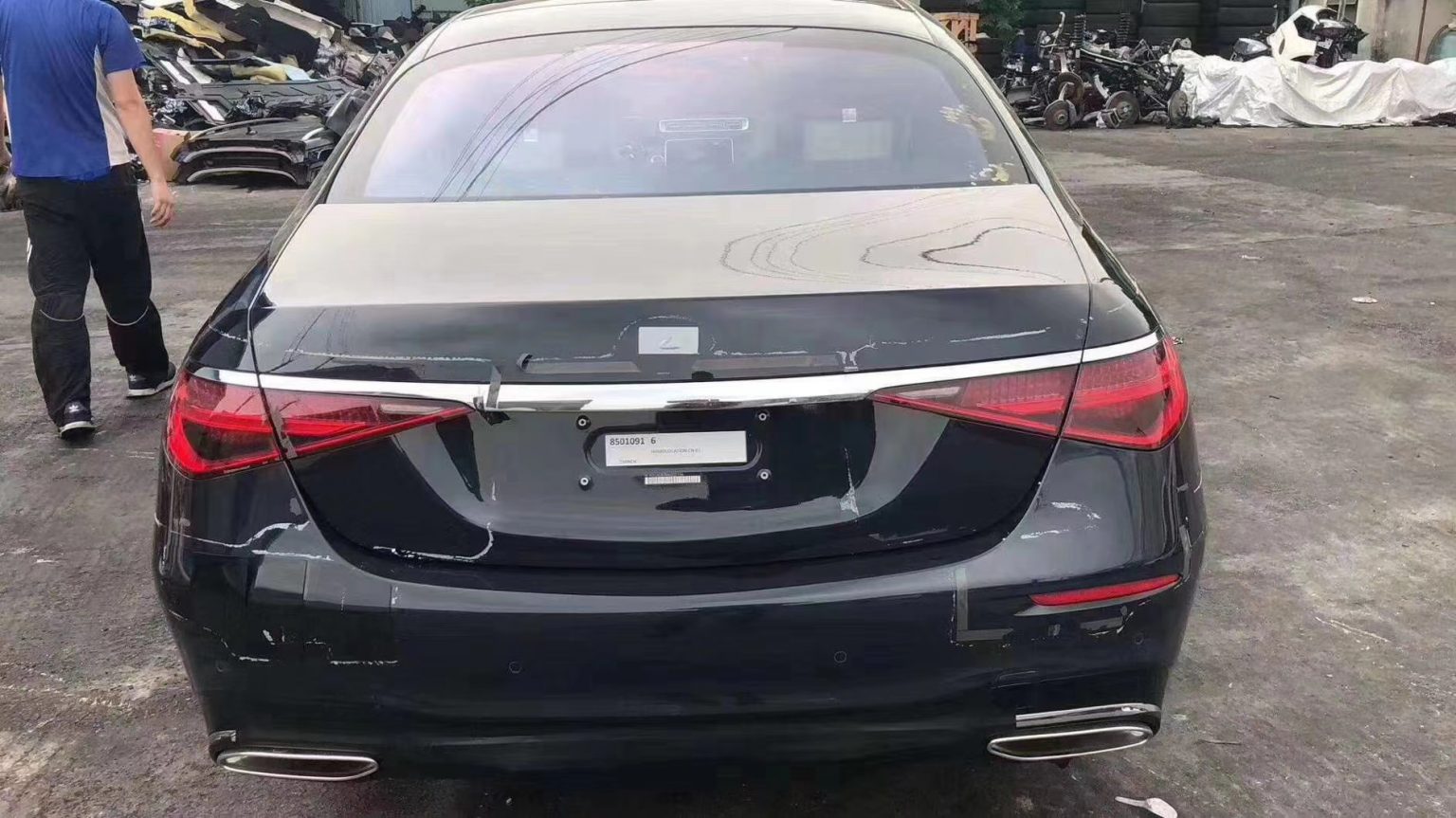 The dashboard shows the tablet that we anticipated a few months ago and that occupies virtually the entire center console. According to our estimates, the tablet will have a diagonal of 20 inches (50 cm) with a width of 30 cm and a height of 40 cm, thus being slightly larger than Tesla. From the photo it seems that the only physical buttons will be those at the base of the tablet, otherwise the center console is free. Most likely the functions of the MBUX system are embedded in the tablet and thus the touchpad disappeared. 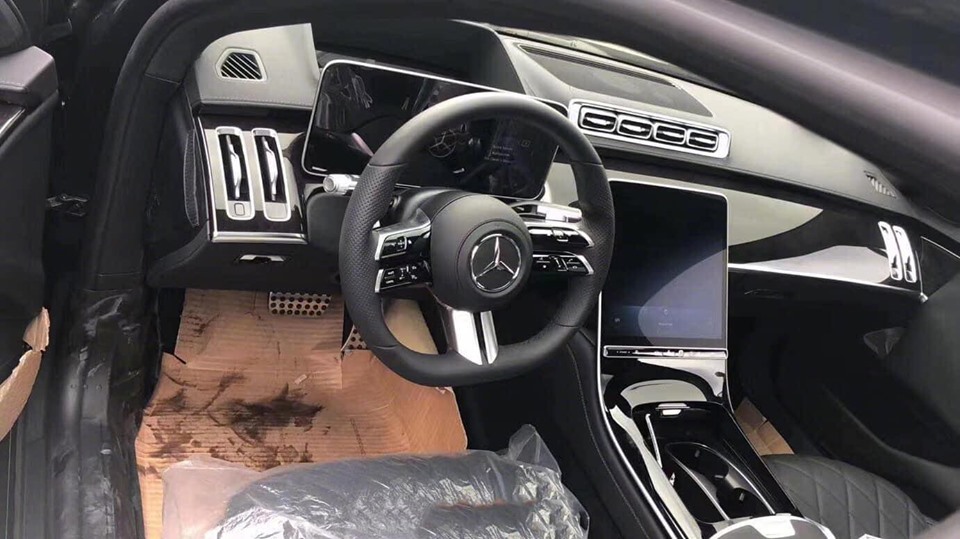 The touch screen will allow, like Tesla, not only the operation of the navigation system, the radio and the phone, but also the access to almost all the functions and systems of the car. Mercedes promises that the software of the new multimedia system will be able to be updated online just like at Tesla. Another important chapter of innovation concerns self-government.

The gearshift remained in the traditional position on the right on the steering column. 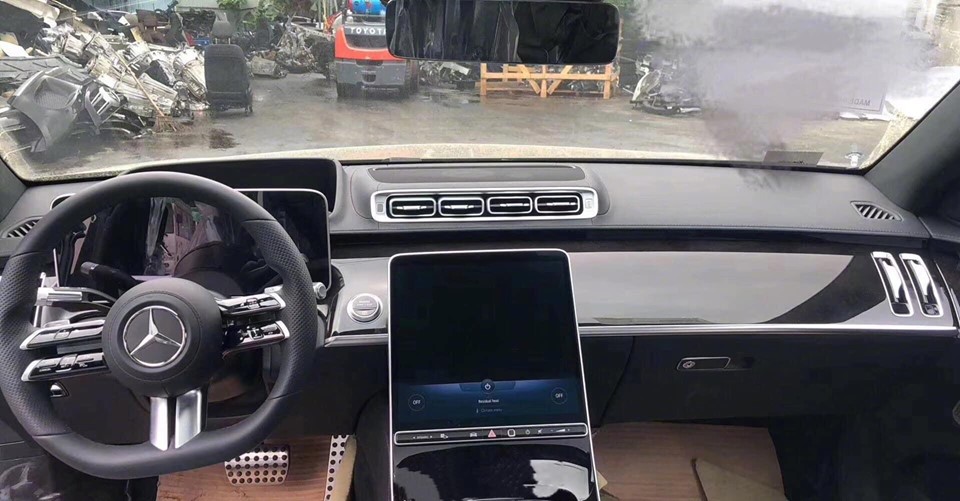 The four central vents are rectangular and follow the idea from other Mercedes models. But the ones on the side, placed two by two, have an elongated shape, completely new.

The model photographed was equipped with the entertainment system for the rear seats with two touch screens mounted in the backs of the front seats and a tablet located in the center console that allows control of the multimedia system. 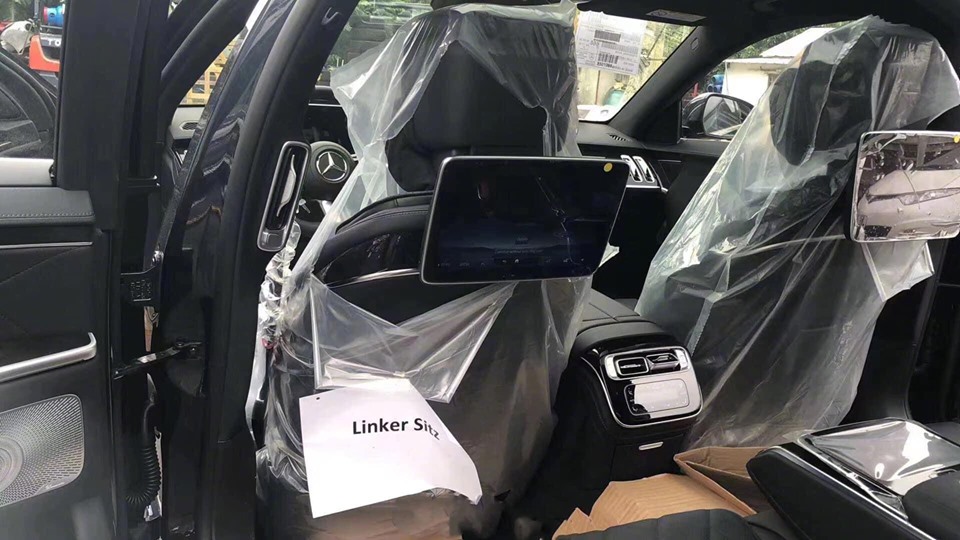 At Detroit Motor Show in January 2018, Britta Seeger, head of sales and marketing at Daimler, had told that the future S-Class will be the first Mercedes with level 3 self-driving. But the availability of this system depends on whether the legislation in the field will be ready because even the Audi A8 cannot be sold for the time being with level 3 autonomous driving.

Some unconfirmed rumors speak about the possibility that Mercedes will give up the short version that today measures 5.12 meters. Thus, only the long version, with 5.25 meters, and Maybach, with 5.45 meters, would remain in the range.

The 2021 Mercedes S-Class uses the new MRA platform for the first time, now in the MRA II version because the current S-Class, W222, was based on the former W221 which did not use the MRA platform (the first model on the MRA was the C-Class in 2014).

Integral steering for the first time at Mercedes S-Class

It seems that the exterior dimensions will be slightly increased to give more space to passengers and Mercedes promises that, despite the increase in size, the car will not be heavier. For the first time, the S-Class will be available with integral steering and the German media announces that the steering angle of the rear wheels will be higher than on the MLB platform from VW-Audi-Porsche.

Diesel remains in the program

With the lowest NOx emissions in the automotive industry, well below the Euro 6d regulations that already came into force on January 1, 2020 and which also include the road emission test, Rde, the future S-Class will still be available with the diesel engine with 6 cylinders in line of 3 liters (286 and 340 HP). Is not exclude also a 4-cylinder version of 2 liters that also existed in the S-Class two generations ago that could deliver about 245 hp.

Gasoline engines will have a 48V network  and will benefit by the mild-hybrid system with 22 hp electric motor that helps acceleration. The famous 4-liter twin-turbo V8 engine will be found in both the S 560 (it is not yet known if it will be called that) and the S 63 AMG.

The question mark is a V12 version, but some rumors announce it for the Maybach versions. But there will certainly be a Plug-In Hybrid model with a modernized propulsion system. And separately, in the EQ range, a 100% electric version is being developed to rival the Tesla Model S. The Mercedes EQS is planned for the next year.

The current generation S-Class coupe and convertible goes out of production in the next months and it looks like a convertible will no longer exist. And the coupe is uncertain but remains to be seen.

Mercedes considers that the sales volumes for them are too small and wants to concentrate its resources for Mercedes EQS.