This year, both the Jeep Wrangler and the Mercedes G-Class have received new generations. First static comparison of the two terrain legends.

Old vs. New World, V8 vs. Four Cylinder, Business Dress vs. Workwear – the two most spectacular off-roaders in the world are separated by many things, not just the price. And yet they are very similar in many ways. Especially in their sense of tradition. While other manufacturers have taken outstanding off-road vehicles out of the program or re-ground them to the road-oriented luxury SUV segment, those responsible at Jeep and Mercedes remained sincere.

Not only because of each unmistakable and very successful reference to the design of the predecessor, despite the complete redesign. But also in the used terrain technology. In their new generations, the Jeep Wrangler and Mercedes G-Class are not blenders, but experts who can do more outside the asphalt than the majority of buyers will ever demand. 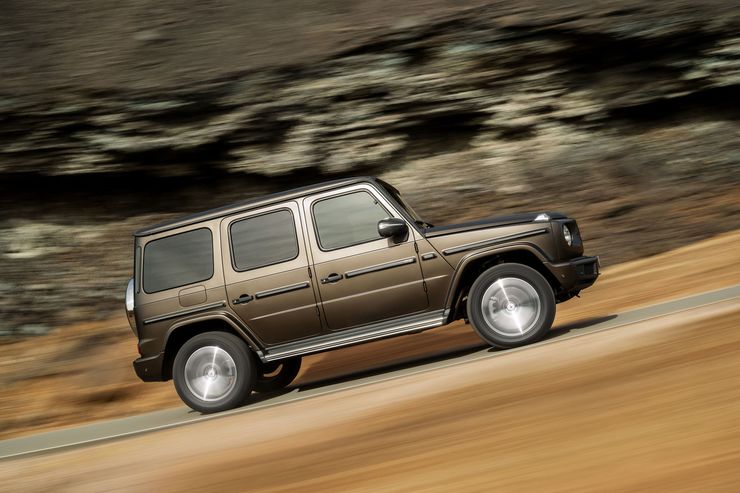 Chapter 1: The price
Mercedes thinks everything twice. This can be confidently written in most of the following chapters, but in any case at the purchase price. The base model in Germany is the G 500 for 107,041 euros – even the S-Class is cheaper. The entry-G with its V6 diesel is expected to start from about 93,000 euros. The prices for the Jeep Wrangler in Germany are not yet published, but the specifications of the US model already point the way – it will cost several thousand euros more than the 2017 model. The base price will be at least 40,000 euros, the top models with full equipment will go over 50,000 euro. Cheap it is by no means, but instead of a Mercedes G-Class you still can buy two Jeep Wranglers – a funny option. 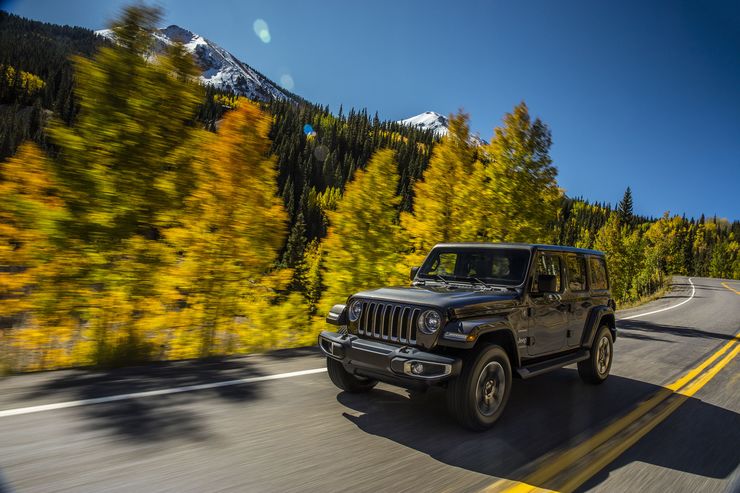 Chapter 2: The performance
The base G-Class in Germany is the G 500. The V8 engine delivers 422 hp and 610 Nm of torque – with a displacement of only 3.98 liters. Standard for the Mercedes is the 9G-Tronic automatic gearbox, while the Jeep Wrangler JL gets an automatic with “only” eight gears. Significant is the difference in the engine, the standard Wrangler will be driven in the future by a completely new two-liter four-cylinder turbo gasoline engine. According to US specifications (the data determined according to Euro standards are not yet available) this version achieves a maximum output of 270 hp and 400 Nm. Above it there is a 3.6-liter V6. In addition, should also come in Europe, a four-cylinder diesel from Fiat, whose data are still concealed – in the Alfa Romeo Stelvio the 2.2-liter diesel churns out 210 hp and 470 Nm. Anyone who chooses the performance chapter should therefore be pretty clear. 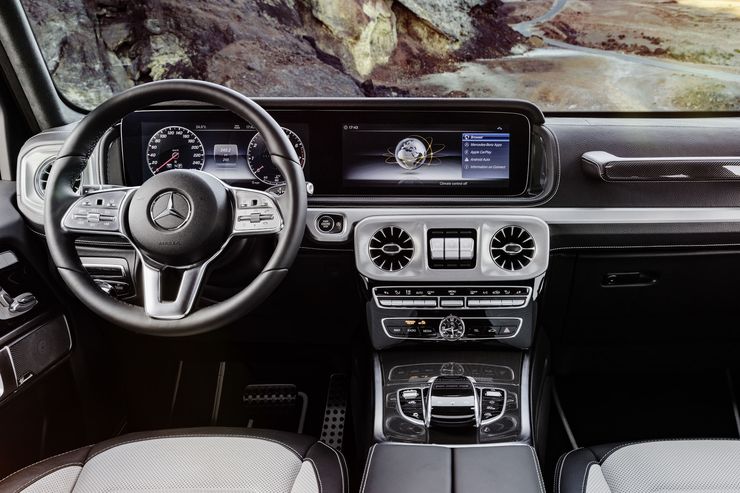 Chapter 3: The space
Five centimeters in length and twelve in width is the increase in dimensions advertised for the new Mercedes G-Class, the once extremely narrow model is now almost as wide as the GLE. On the inside, this can be experienced on every seat. Especially noticeable for the rear seated passengers who are better accommodated with 15 centimeters more leg room. But also on the front seats, where the previous narrowness has given way to clear width. Not only the shoulder room has increased by four inches; elbow / hip freedom has benefited even more. As the new Jeep Wrangler clearly goes second in the finish line: Its interior width and the footwell would have been enough to show the previous Mercedes G how it is supposed to be done, but the new edition of the G-Class offers more. This applies, mind you, for the four-door Unlimited version, the Jeep is also available in a much shorter two-door version. 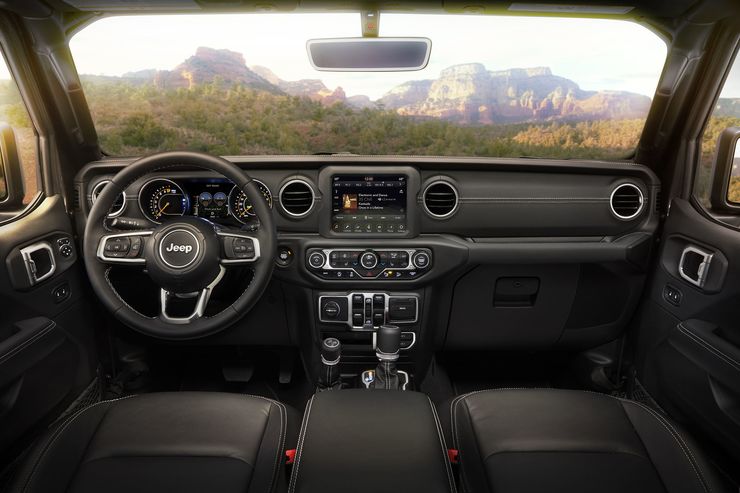 Chapter 4: Suspension
Mercedes has broken with tradition, at least on the front axle, and will be offering for the first time in almost 40 years a front independent suspension. The advantages of this construction – steering and handling as well as comfort – result in terrain disadvantages: worse axle articulation, reduced ground clearance under load. Mercedes countered the reservations with a particularly robust design of all axle components, which should reach in terms of durability, the level of the existing rigid axle. Nevertheless, the Jeep Wrangler was aware of this and it still offers in front a rigid axle. Together with the little Suzuki Jimny, the Jeep Wrangler will be the only available new model with this ultimate off-road technique on sale. That the Mercedes pulls the Jeep not only because of its higher performance on the road, is official. The higher suspension comfort speaks in this point for the Mercedes. 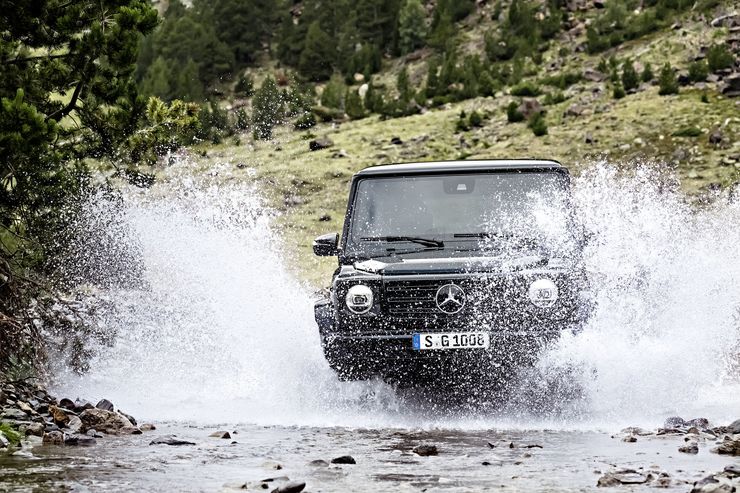 Chapter 5: off-road capability
For both developers, one thing was clear: the off-road capability of the predecessor model had to be at least achieved, if not exceeded. This has already been clearly demonstrated by the data, but also the first driving impressions, for example with the Mercedes G in the test area at the Schöckl. The ground clearance at the lowest point – under the differential of the rear rigid axle – is comparable in both vehicles, with a slight advantage for the Wrangler, who uses slightly higher tires than standard. The wading depth is now rated at 70 centimeters in the Mercedes G and 77 centimeters for the Wrangler.

The values ​​for the freedom of movement are more important in off-road situations: the slope angles describe how steep an ascent or descent may be without touching the ground with the vehicle. Here, the Jeep with its better slope angles is literally ahead. 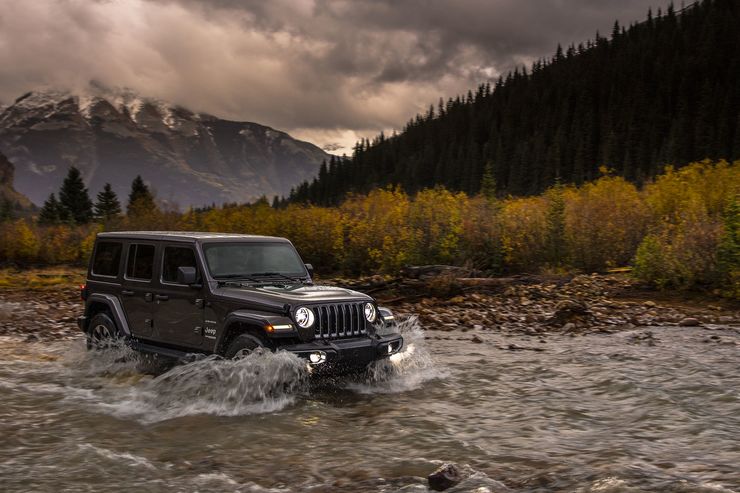 Another important aspect is the achievable minimum ratio so that with as much torque as possible the car can be driven as slowly as possible in the terrain. With the new transfer case and its particularly short off-road ratio (2.9: 1), Mercedes sets the bar quite high.

But Jeep is higher. In Germany comes the new transfer case variant with permanent all-wheel drive, MP3022 Selec-Trac transmission (before exclusively for the Jeep Wrangler Rubicon) with a surface ratio of 4.0: 1. This is a pretty lone peak in the off-road scene. For comparison: The previous Mercedes G had a ratio of 2.1: 1. The two 100-percent axle locks can only be a benefit to the G-Class if the Jeep buyer does not use the Rubicon package. Because then he has these features as well. Also because of the lower weight and the more compact dimensions, the chapter Offroad continues to be won by the Jeep Wrangler. 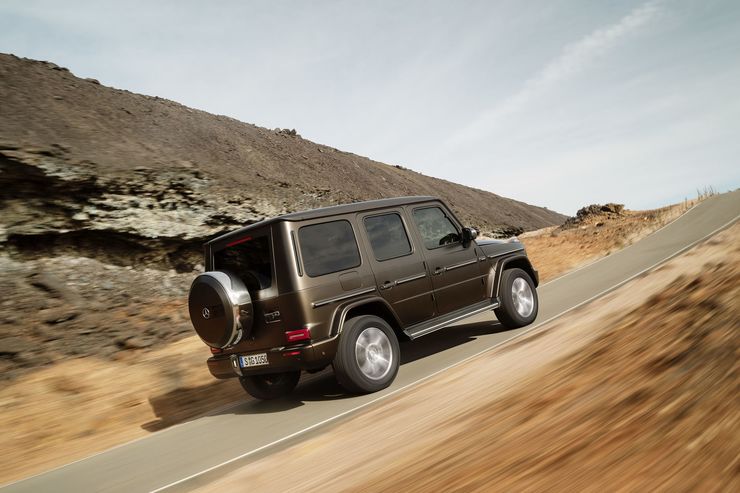 Chapter 6: The equipment
Naturally, the Jeep Wrangler no longer sees land here. For the furniture in the new Mercedes G – carpets, seats and trim material plus the multimedia electronics, reach the level of the Mercedes S-Class. By contrast, the Jeep Wrangler is clearly shirt-sleeved, even ordered in the nobler Sahara outfit. A new infotainment system and better processing than its predecessor it offers, but unlike the Mercedes G you can also remove the doors, the roof and fold the windshield. Of course, anyone who can afford to be so nude will have to offer a more robust interior, hence the legacy of the sunken rubber boots. The chapter shine and glamor goes therefore clearly to the G-Class. 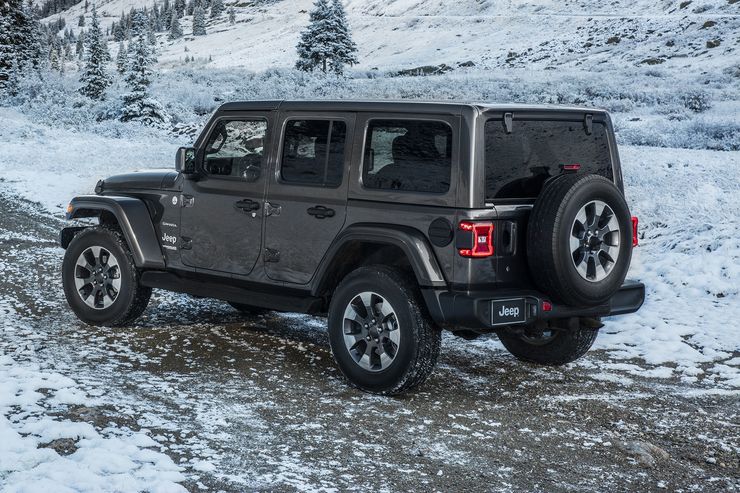 Conclusion
In terms of luxury and image of the Mercedes G is far ahead, the ride comfort and space for the passengers are better. However, one should expect this given the price difference. The Jeep Wrangler, however, continues on his own path as a rustic nature lad, as the hard terrain (at least in the Rubicon variant) expert for lesser budgets. Even so it is no longer cheap, but open to adventure.