Mercedes-Benz has a particularly busy year. The brand launched not only a new A-Class, but also a sedan version of that car, the new GLE, the AMG GT 4-Door and a facelifted C-Class. At the Paris Motor Show, Mercedes-Benz presents the A 35 4Matic and the new GLE to the general public, both cars that have already been digitally presented. At the beginning of October, the completely new B-Class will also have its debut in Paris, as Mercedes-Benz announced today.

Mercedes-Benz calls the third generation B-Class a car where “[…] the emphasis is put on the Sport part in the Sports Tourer plate”. That sounds technically very good, but from previous spy images we could already conclude that the new B-Class in fact just follows the spatial concept and general shape of the current generation. The 2019 Mercedes B-Class will again share the technology and platform with the A-Class. The backbone for both is the new MFA2 platform, on which Mercedes builds all compact models. Inside, the B-Class is big – much bigger than it looks from the outside. There is plenty of room for the legs both at the front and at the back. The rear seatback can now be folded down in a ratio of 40 to 20 to 40, before the division was still 40 to 60. The upright, high, but comfortable seating position is changed from its predecessor. In combination with the steep windshield and the low dashboard results in a gigantic field of vision forward. Like the A-Class, the B-Class now has the MBUX display and control system, which consists of two interconnected screens – as standard. The entry-level version features smaller displays and a separate screen-to-screen veneer, while the top versions have larger displays behind a continuous glass panel. Thanks to Android Auto and Apple Carplay smartphones can be conveniently connected to the infotainment system. The MBUX firmware update can be installed over-the-air. 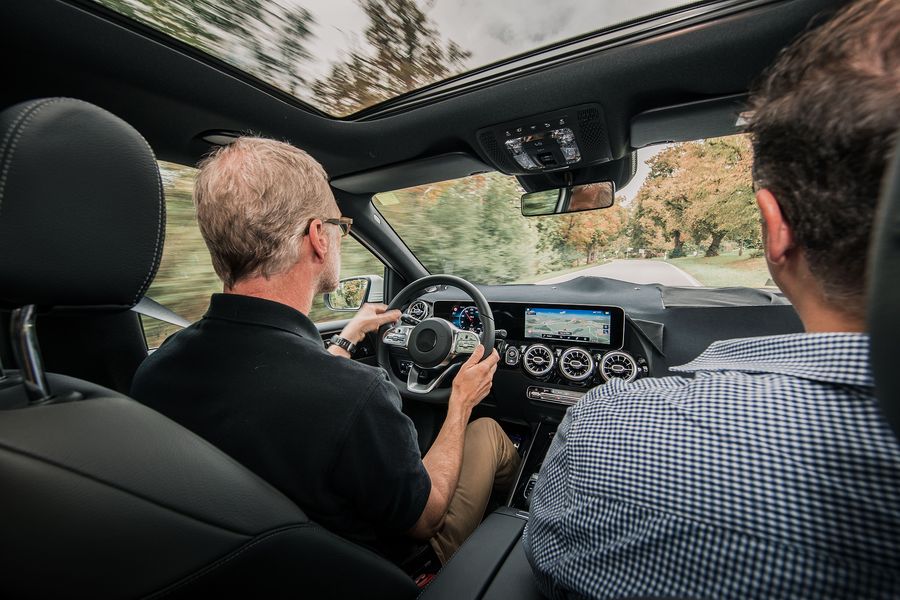 According to Auto motor und sport, the chassis of the new B-Class achieves a balance between comfort and dynamics. Even bad potholes are not an issue, but the price for comfort is a tender tendency of the tall body to lean in turns. The test prototype was powered by the OM 654 diesel with 1,950 cubic centimeters of displacement and 245 hp – from the current C-Class. From stand still, the diesel ignites audibly, but while driving the noise disappears. Thanks to powerful torque, the B-Class sprints lightly with this top-of-the-range diesel.

Mercedes has developed a new dual-clutch transmission (DKG) – one with eight gears. The combination of the largest B-Class diesel engine and the eight-speed gearbox has been well coordinated by the engineers: No jerking at start, no bad revving without significant throttle when accelerating – the new drive package fits. And it has to be: After all, the B-Class is a spacious compact car among the best-selling Mercedes models.