2018 Mercedes S-Class Coupe and Cabrio facelift will debut at the IAA Frankfurt motor show, this September. The debut has been confirmed by official Mercedes sources.

Following closely the already facelifted Mercedes S-Class sedan, the 2018 S-Class Coupe and Cabrio will host a series of minor visual tweaks and, more significantly, a technology update meant to keep the biggest and most luxurious sports cars in Mercedes line-up competitive for another 3 years on the market.

Perhaps the biggest change will mark the debut of an all-new range of engines, chief among which will be the V8 bi-turbo unit lifted from the facelifted Mercedes S 560 sedan. This engine will be rated to 469 PS and 700 Nm or 516 lb-ft. Also, fresh is the new inline-six 3.0-liter turbo gasoline and diesel engines which will deliver 286 and 340 PS.

Another chapter which will see a significant boost is that of the active safety, which gains the latest iteration of the Mercedes-Benz Intelligent Drive suite of assistance systems, including Active Steer Assist, DISTRONIC Active Proximity Assist, Active Lane Change Assist, Active Emergency Stop Assist and Traffic Sign Assist and Remote Parking Assist function.

The upgraded Mercedes-AMG variants, the Mercedes-AMG S 63 and S 65 Coupe and Cabrio will not show up in Frankfurt, but later on, most probably at the Tokyo motor show (Oct. 27-Nov. 5). 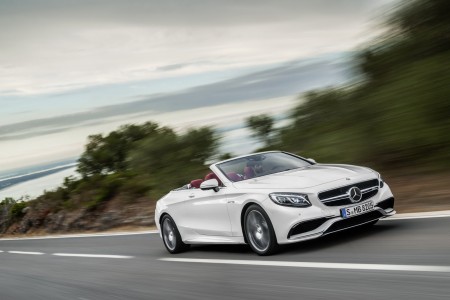