The 2019 Mercedes-AMG C 43 facelift  has been spotted wearing new bodywork, including the high-tech LED headlamps (Multibeam), which are already familiar from the current E-Class.

The changes are focused on the bumpers and front grille, the aesthetic updates applied to the 2019 model mirroring the light changes already previewed for the regular C-Class range. MORE DETAILS FOLLOWING THE LINK BELOW.

The bumper design has changed slightly with new air intakes, otherwise the C 43 receives minimal changes in the cosmetic sector. Among them is also the chrome strip on the side skirts, which is echoed on the trunk of the Mercedes-AMG C 43 facelift.

In the interior, Mercedes will likely add its digital instrument cluster, as seen on the regular C-Class facelift, in place of the C 43’s dials, but little else is expected to change to the interior’s overall design. 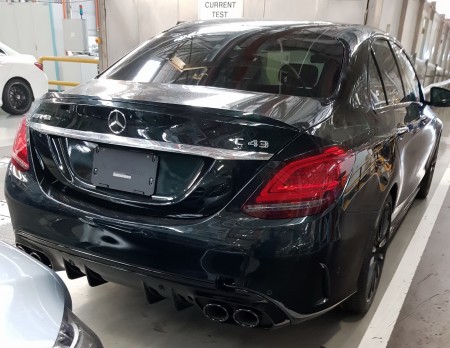 In terms of powertrain, the Mercedes-AMG C 43 facelift is also unlikely to receive much modification. Mercedes will eventually replace its turbocharged V6 engines with straight-six ones, but the current C 43 is tipped to stick with its 367 hp 3.0-litre unit until the end of its production life.

No other major hardware changes are expected until the next-generation C-Class range is launched at the start of the next decade.