The 2018 Football World Cup in Russia is just around the corner and #Mercedes-Benz makes sure everyone knows who its favorite TEAM is. Around three months before the opening game on 14 June in Moscow, Mercedes-Benz is rolling out the “Best Never Rest” campaign which supports the German national football team, known as THE TEAM.

Permanently striving to reinvent is a trait that bonds Mercedes-Benz with the German national football team. “Always keep on moving, keep on fighting, don’t rest on your laurels – this is what THE TEAM stands for and this is what we stand for”, says Dr Jens Thiemer, Vice President Marketing Mercedes-Benz Cars. “This attitude is driving the German national football team on their path to that fifth star representing their fifth title. And this ambition always to continue developing and as the best to become even better, now has a name with our campaign: ‘Best Never Rest’.”

The German national football team Coach, Joachim Löw, chose the new Mercedes-Benz C-Class for the campaign, a model he says just like the “Best Never Rest” World Cup campaign draws on this high standard in emotionally charged motifs and sets the mood for the most important sporting event of the rest of this year. “The campaign’s motto hits the nail on the head”, says National Coach Joachim Löw. “Because this is precisely the stuff champions are made of: they’re not satisfied with what they’ve achieved, they’re greedy for the next success. We need this fighting spirit and absolute will to win in Russia in order to overcome such strong and hungry opponents as Spain and Brazil.” 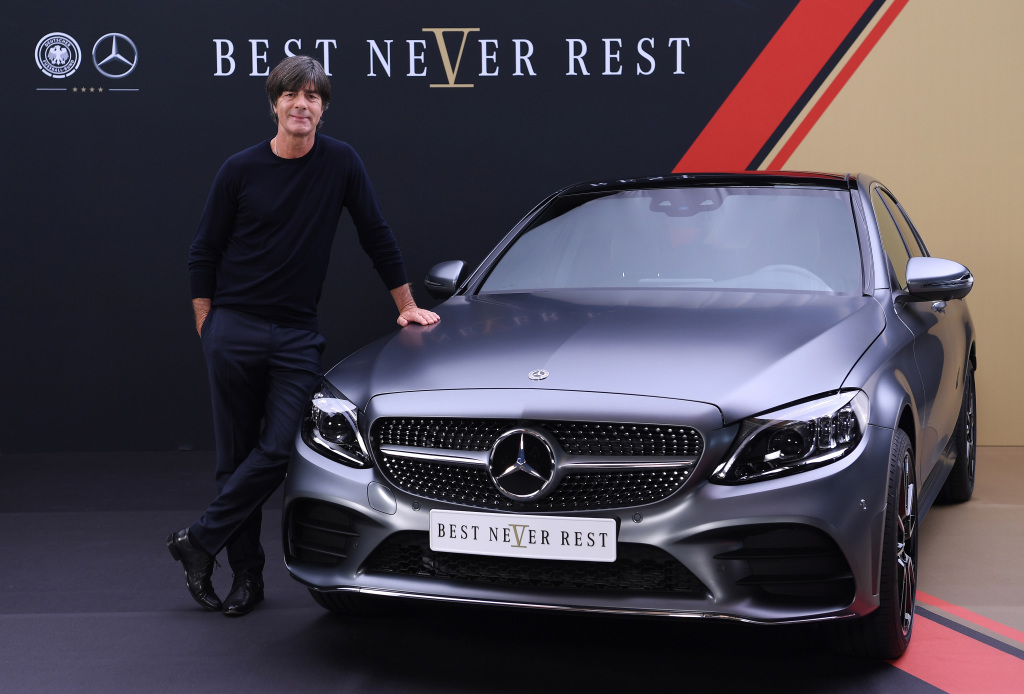 Top achievements in the Qualifiers for the 2018 World Cup, plus an outstanding press from the international sports journalists confirm the TEAM’s renewed ambition to lead. “We’re starting from an outstanding basis”, says Oliver Bierhoff, Manager of the TEAM. “But that isn’t enough. To take the title we can’t allow ourselves to repeat the mistake we made in 1990 and rest on the laurels of our World Cup title. In order to remain the best we always have to continue developing, we must never stand still.”

During the soft launch from 21 March to 25 May 2018, the focus will be on the brand and team on social media (campaign branding, moving-image formats on “The next star for Germany”). The stadium communication (advertising boards, cam carpets, centre-circle onserts) starts with the Germany versus Spain match on 23 March in Düsseldorf. That is when the players will appear for the first time wearing the anthem jackets branded with the campaign motto.

The team bus and team vehicles will be adorned with the campaign claim from this point in time. In its social media communications, Mercedes-Benz is using measures such as sponsored trends with a first-view option on major sporting days such as on all those with the DFB team’s World Cup games. The individual package developed with Twitter Germany enables every Twitter user in Germany to encounter campaign content immediately when opening the app.

From May up until the Final the communications will be stepped up with TV advertisements, out-of-home advertising and point-of-sale activities, with the vehicles and players dominating the motifs.