2017 Mercedes C-Class Cabrio has been caught testing with minimum camouflage. The new model will hit Mercedes showrooms next year, following the successful launch of its coupe sibling already on sale.

Mercedes’ first-ever C-Class Cabrio will be positioned right at the base of the three pointed star’s drop-top line-up. Set to premiere early next year, the new model won’t go the hard-top route. Instead, Mercedes has opted for a canvas roof, keeping the weight in check due to the lower complexity of the system.

So, the new C-Class Cabrio will surely be one of the most light-footed drop-tops in its segment. Now that we’ve got that straight, what about its design? Relying heavily on the gorgeous all-new C-Class Coupe for inspiration, the future C-Class Cabrio can only up the ante with even sleeker proportions, thanks to the elongated profile instilled by the disappearance of the fixed roof.

Following the move upmarket for the future E-Class Coupe and Cabrio models, Mercedes’ new C-Class Cabrio will inherit the MRA platform of the current C-Class sedan. Known under the internal code name C 205, the new Cabrio will feature four- and six- cylinder engines plus the sweet bi-turbo V8 of AMG GT fame destined for the top-of-the-line Mercedes-AMG C 63 Cabrio variant. 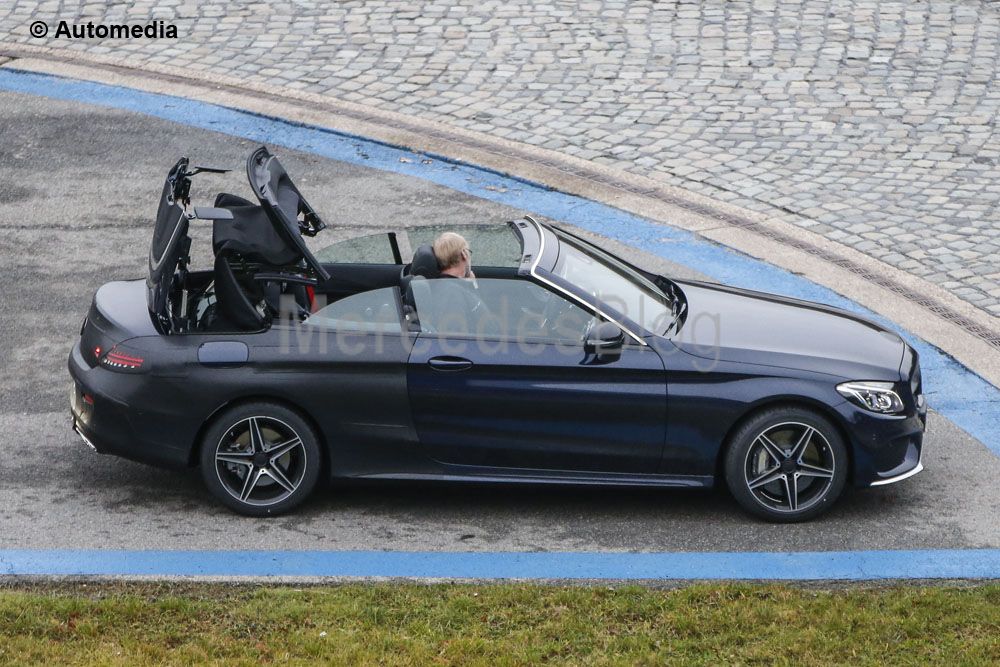 Since the bigger E-Class Coupe will move upmarket and inherit the upcoming E-Class’ foundation – in fact a variation of the same MRA sporting bigger tracks and wheelbase, the upcoming C-Class Cabrio will rival the Audi A5 cabrio and BMW 3 Series cabrio with the former set to receive an all-new generation as well sometimes next year.