Following the early leak last week, the 2016 Mercedes SL facelift has finally been revealed at the Los Angeles Auto Show. The car not only looks more dynamic, but its engines are also more powerful than before. We give you the full details.

On the market since 2012, the Mercedes-Benz SL – internally known as the R231; gets its customary mid-life facelift. The front-end is all-new with the SL now wearing the trademark diamond grille, two extra power domes on the hood and standard LED Intelligent headlights which are narrower and closer to the starry emblem. Also, the refreshed car gets larger air intakes, wider fenders and exterior mirrors now mounted directly on the doors.

At the rear, the changes are far more subtle. Again, the new Mercedes SL gets a new apron, clearly inspired by the design of the AMG GT. The LED tail-lights also receive new interior graphics and emit a more powerful light signature. 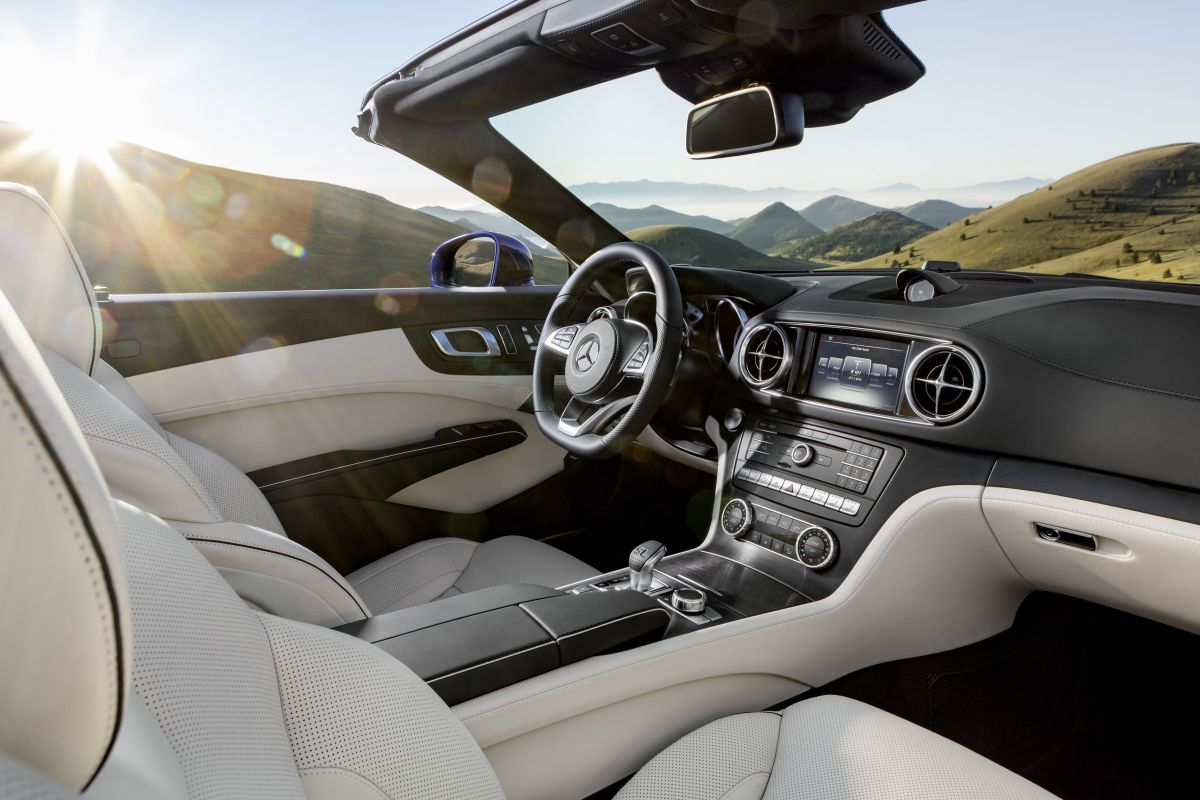 For the interior, Mercedes has prepared an onslaught of fresh gadgets, from the latest driver assistance systems to the upgraded infotainment solutions with Apple CarPlay support, optional internet connection and voice controls. The dials and pointers of the instrument cluster have been redrawn, while the center console now carries an optional analog clock and two standard USB ports. The media display can present dynamic driving data: longitudinal and lateral acceleration (in a G-force cross) or torque and output. In addition, the new steering wheel is flattened at the bottom. Interestingly enough, this steering wheel is available taking into account the different surfaces and functional button combinations in over 100 variants.

Another new feature is the “Magic Vision Control” (intelligent wash/wipe system sees the wiper blade delivering washer fluid immediately in front of wipe lip, via the water feed line integrated into the blade) and the new “Driving Assistance package Plus” with stereo cameras. This includes Active Blind Spot Assist, Pre-Safe Plus, Distance Pilot DISTRONIC and Steering Pilot functions which assists the driver with maintaining a safe distance from the vehicle in front and staying in the centre of the lane. As standard the SL features Active Brake Assist system that carries out autonomous braking to reduce the danger of rear-end collisions. 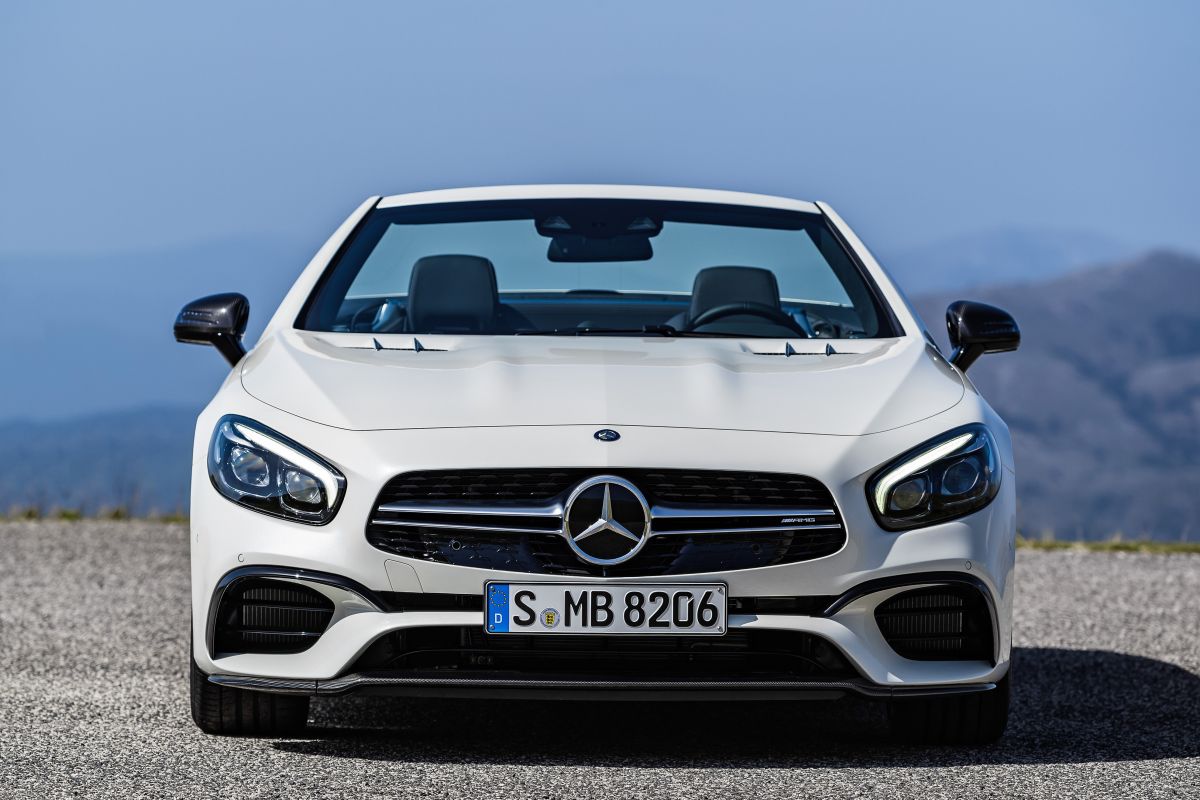 The practicality of the Mercedes SL is increased by the modified hardtop operating mechanism which now can be fully closed or opened automatically up to 40 km/h. For easier loading now the boot partition goes up automatically when the tailgate is opened.

When the 2016 Mercedes SL facelift will be available for purchase from April 2016 there will be a revised range of engines accompanying the upgraded roadster. The SL 400 facelift gets the stronger three-liter V6 biturbo unit. The power is now 367 hp and maximum torque is 500 Nm, marking an increase of 35 hp and 20 Nm respectively. The SL 500 retains the  4.7-liter twin-turbo V8 with 455 hp and 700 Nm. Both versions are coupled to the nine-speed 9G-Tronic automatic transmission. 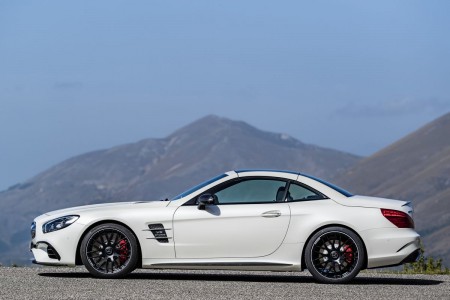 Continuously variable dampers for the steel suspension equipped SLs and Dynamic Select are standard together with the five driving programs which can change the set-up of the engine, transmission, suspension and steering. For enhanced driving dynamics, the optional Active Body Control is happy to provide the SL an additional curve tilt function and automatically controlled ride height which can be lowered by 13 mm at high speeds or, conversely, be raised by 50 mm for tackling rougher road conditions.

Mercedes now also offers Brilliant Blue and Designo Magno Selenietgrijs as new exterior colors to. There will also be a whole new set of 19-inch wheels are available for the SL. In addition to the usual AMG optic, Chichi special models come with reinforced brakes, an optimized chassis and other wheel and tire combinations. 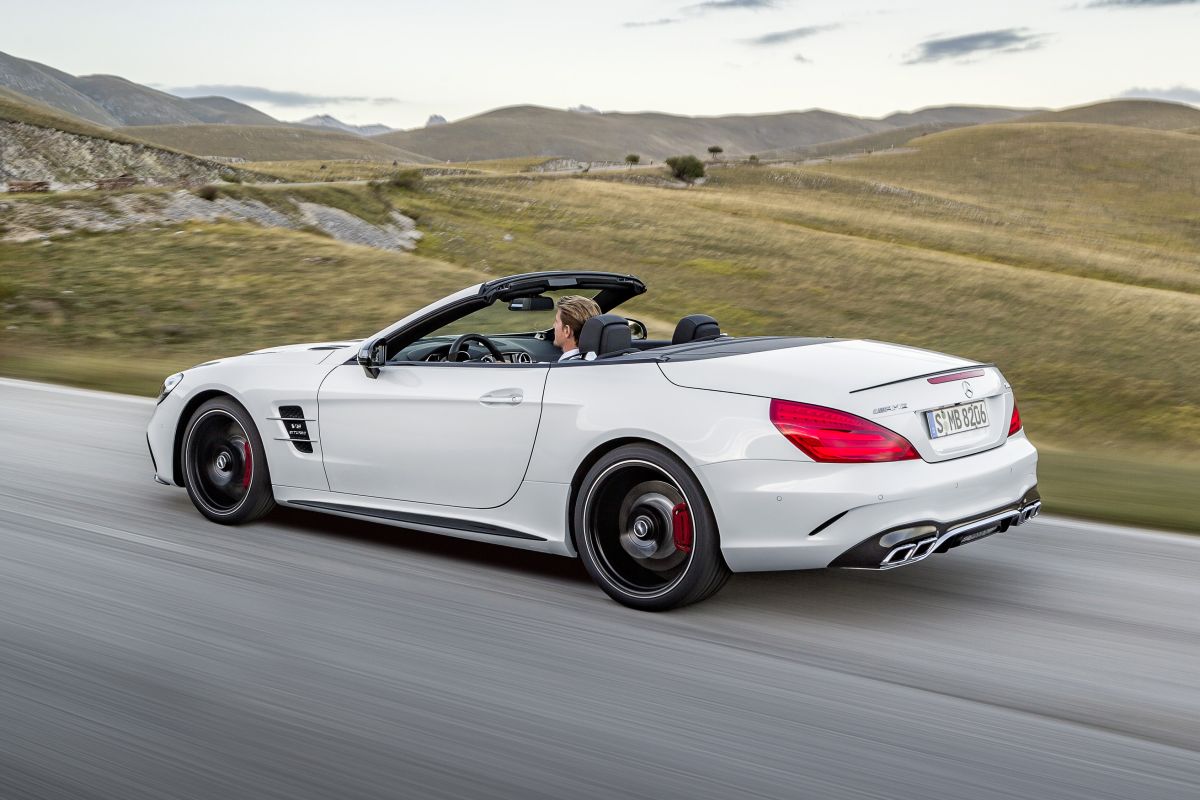 The new Mercedes SL debuts today during the press day of the LA Auto Show with its commercial debut slated for April 2016.