The all-new Mercedes-AMG C 63 Coupe has been officially revealed. Mercedes’ answer to the BMW M4 will premiere this September at the Frankfurt motor show. FULL DETAILS AND SPECS.

Destined for greatness means you should also dress appropriately. Mercedes complies and instills the C 63 with unique design touches which set it apart from its lesser siblings down the range. In fact, the frameless doors, roof and boot lid are the only elements shared by the all-new Mercedes-AMG C 63 Coupe and the recently unveiled C-Class Coupe. Everything else has been subtly redesigned to fit the true spirit of an AMG hot blooded sports car.

The body has been reinforced in key areas and is now much wider just like the chassis itself which gets larger tracks front and rear. As a result, the fenders were extended by 64mm and 66mm in width, while the standard tyres have been replaced with performance oriented wide rubber – 255mm on the front axle and 285mm at the rear, as opposed to the 235mm/255mm tyres the previous model was equipped with. The all-new Mercedes-AMG C 63 AMG is fitted with 18inch alloys in standard guise and 19inch rims in top C 63 S variant. 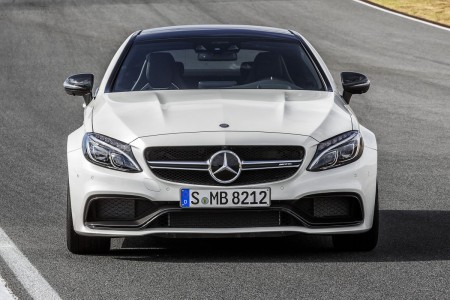 The all-new C 63 Coupe can’t swiftly hide its AMG roots, given away by the two powerdomes proudly sitting on top of the aluminum bonnet, now 60mm longer. Larger air inlets are integrated in the newly shaped front bumper featuring black inserts and an integral front splitter which reduces front-axle lift. Also unique to the Mercedes-AMG C 63 Coupe are the black accents adorning the exterior mirrors, the narrow boot lid spoiler, the lower side sills as well as the rear valance serving as an air diffuser. Form follows function too with the laterally positioned, optical air outlet openings improving the rear air flow. The muscular appearance is completed by the four trapezoidal chrome-plated tail pipes and the low arrow-shaped radiator grille, AMG lettering and oversized three-pointed star included. 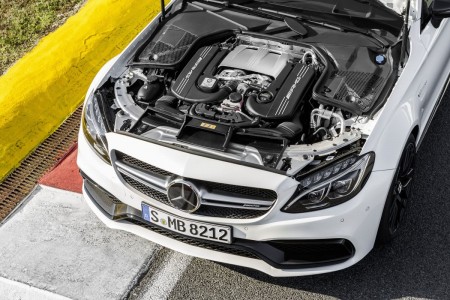 Yes, you got that right. The all-new Mercedes-AMG C 63 Coupe is the epitome of gorgeousness injected with the perfect dose of muscular detailing befit of the AMG emblem. Let’s not get carried away though. If you believed the ever-romantic designers have finally won the war with the engineering arm of Mercedes, think again. Tech-wise, the new uber-coupe impresses even more.

Hiding under the long bonnet of the new rear-wheel drive coupe is none other than the same twin-turbocharged 4.0-litre V8 petrol engine of Mercedes-AMG GT fame with only the lack of dry-sump lubrication in C 63’s case setting the two apart. It is also essentially identical to the unit which debuted alongside the recently introduced C63 saloon and estate.

Known under the internal codename M178 (M177 in the Mercedes-AMG GT), the AMG developed V8 features direct injection and two turbochargers revolutionary positioned between the cylinder banks and not outside. It comes in two flavors. In standard guise, the C 63 Coupe packs 476 hp and 650 Nm while in range-topping S model’s case it develops a sturdy 510 hp and 700 Nm, 25 hp and 50 Nm more than the naturally aspirated 6.2-litre V8 of its predecessor. This is the same power output as that produced by the Mercedes-AMG GT S, but 100 Nm more than the junior supercar’s rating. The power reserves are taken one step ahead thanks to changes made to the inlet manifold and the increased boost pressure, the all-new Mercedes-AMG C 63 S Coupe trumping both the BMW M4 and the Audi RS5 by an impressive 60 hp and 79 hp respectively.

The headlining Mercedes-AMG C 63 S Coupe model is further set apart from its standard sibling by its dynamic engine mounts, unique in the segment. The balance between sportiness and comfort is significantly improved while both the steering response and feedback are more direct than before. Basically, the mounts permanently adapt their stiffness to the driving conditions, reducing noise and vibration in their soft setting and improving the handling in their stiffer set-up. 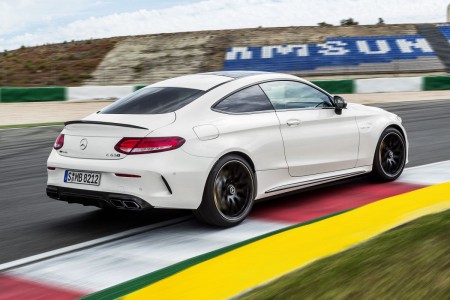 There is no manual option (as is the case of the BMW M4), with power sent exclusively to the rear axle via AMG’s own seven-speed Speedshift MCT (MultiClutch Transmission) automatic gearbox complete with steering wheel shift paddles for manual operation. Compared to the C 63 sedan, the transmission gets a shorter final drive and it operates in combination with a rear axle limited-slip differential, a mechanical locking one for the standard C 63 or a faster reacting electronic locking unit for the top S variant.

Regardless of their speed, both differentials will help the car remain more stable when braking from high speeds, improving traction on the get-go. The driver will be able to accelerate mid-corner much earlier as well, all thanks to the reduced slip on the inside wheel when cornering and just the right amount of torque sent to the wheel with most traction at all times. The ESP system offers three distinct settings (On, Sport and Off) and has also been heavily re-tuned by AMG engineers in order to assist as effectively as possible the rear-axle limited-slip differential’s “decisions”. 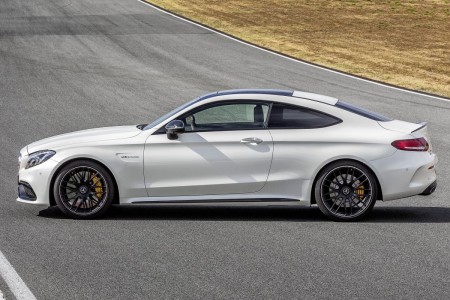 Inside, there are AMG-specific instruments, controls, gear lever and trim applications, along with a flat-bottom multi-function steering wheel and sports seats. Buyers can specify more heavily contoured optional performance seats, which allow a lower seating position.

The all-new Mercedes-AMG C 63 Coupe sits atop the same platform as its standard C-Class Coupe sibling. Its chassis featuring a four link front and an all-new unique to the Coupe multi-link rear suspension has been completely overhauled though complete with new steering knuckles, wider tracks, stiffer elastokinematic tuning and greater negative camber. The rear axle carrier is also new and moves the contact surface of the rear wheels’ bearings 25mm outwards compared to the C 63 saloon and T-Modell. Thanks to variable damping, the AMG RIDE CONTROL suspension is adjustable in three stages. 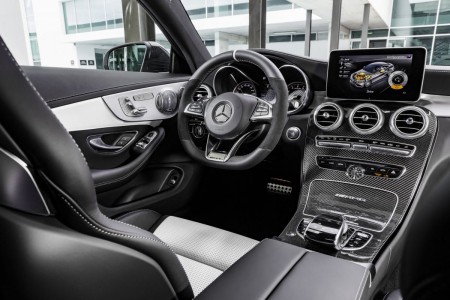 Suspension and ESP dedicated settings aside, the driver can also turn to the dedicated controller on the left side of the touchpad in he wishes to alter the character of the all-new Mercedes-AMG C 63 Coupe. The AMG DYNAMIC SELECT offers four distinct transmission driving modes on the C 63 Coupe base model (from economical to sporty or individual) and five for the S model which gets an extra “Race” setting.

Last but not the least, the 2016 Mercedes-AMG C 63 Coupe’s engine sound is also fully-configurable thanks to the optional Performance sports exhaust system with variable flap technology. Automatically map-controlled depending on the AMG DYNAMIC SELECT transmission mode, the power demanded by the driver and the engine speed in stardard guise, the exhaust changes the tune of the mighty V8 in Performance form to suit the wishes of the driver, from discrete to outright flamboyant, all at the press of a button.

Set to celebrate its official premiere at the Frankfurt motor show this September, the all-new Mercedes-AMG C 63 Coupe will reach Mercedes’ showrooms in March 2016.