2016 GLE versus every possible contender in mammoth Auto Bild test

2016 Mercedes-Benz GLE met its nemesis in Auto Bild’s latest comparison test. No, we’re not talking only about the all-new Audi Q7, but about every possible (true) contender, from the BMW X5 and the Range Rover Sport to the Volvo XC90 and VW Touareg. Who won? Let the countdown begin!

If points were to be given on design merits only, the big Briton would win this test hands down. And this is especially true for the interior layout bathed in the finest of materials. The wide center console tends to amplify the sensation of claustrophobia, though there’s no shortage of space on both rows of seats. The central part of the rear bench is rather hard and unwelcoming too. On the move, the 3.0-litre V6 is up to the task of moving the car, not without the inherent loudness associated with big diesels… a flaw not befit of the aura of luxury and exclusiveness the Range Rover should exude. Power is the same as the BMW’s, at 258 hp, but the Range feels slightly slower in real life. The chassis also fidgets more than we’d like to on bad roads, while the half-retractable rear head restraints seriously impede the view. 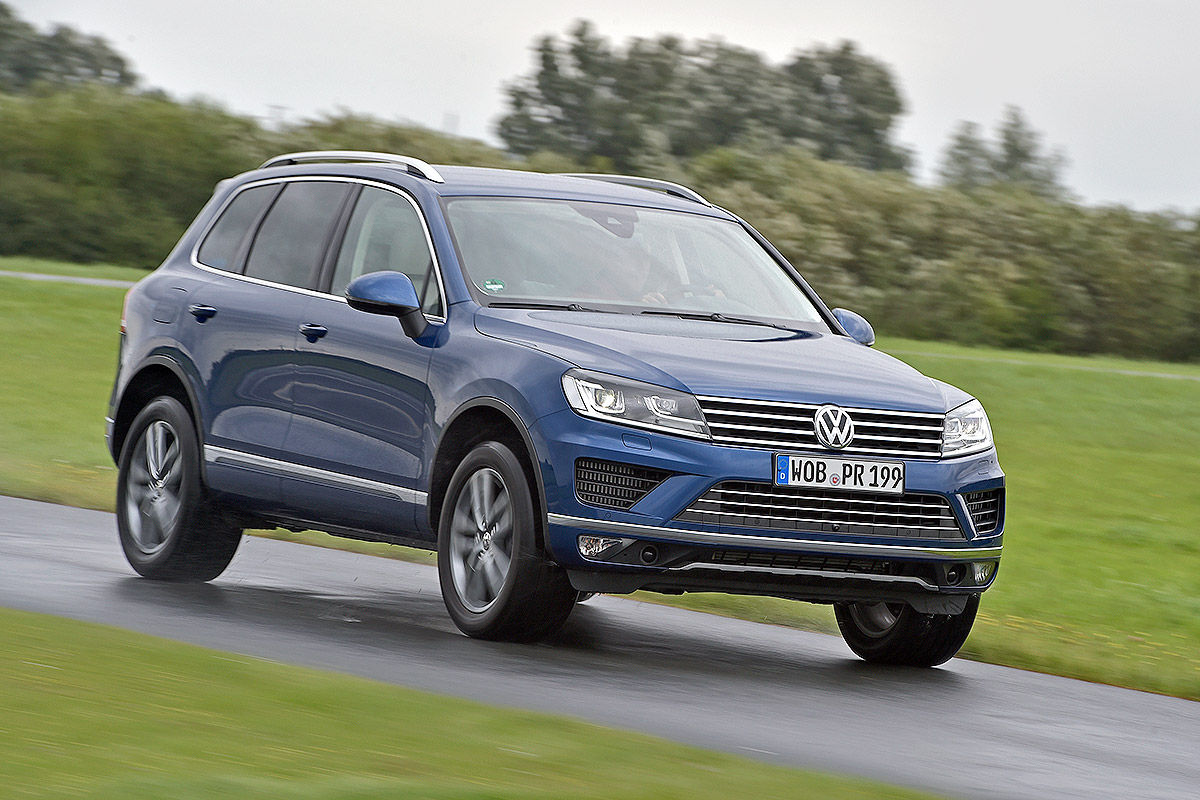 The VW can be summarized as a fortress on wheels. Even if one of the heaviest here as a consequence, the Touareg is not the sedate affair you’d expect it to be. Quite the opposite. Its ride is relaxed but with just the right touch of dynamic prowess. Long waves are successfully camouflaged with only small potholes unsettling the comfort – but only slightly. The well-insulated engine is definitely a monument of quietness, working seamlessly until all the 262 hp from its spec sheet come to life, only then its voice starting to make itself noticed. Sheer pulling force is also A+, a trait which only comes at the expense of efficiency. A quick look at the on-board computer proved the VW sipped no less than 8,8 l/100 km. Now, that is thirsty! Still, there’s little to complain about the space. Thanks to the longitudinally movable rear seats even the tallest of passengers can find a welcoming environment – with the exception of the low sitting position, too low for European tastes. 697 litres, that’s how big the trunk is and it is second to none in this test. Even more, its capacity can be expanded to 1.642 liters – funny enough, the smallest capacity here. 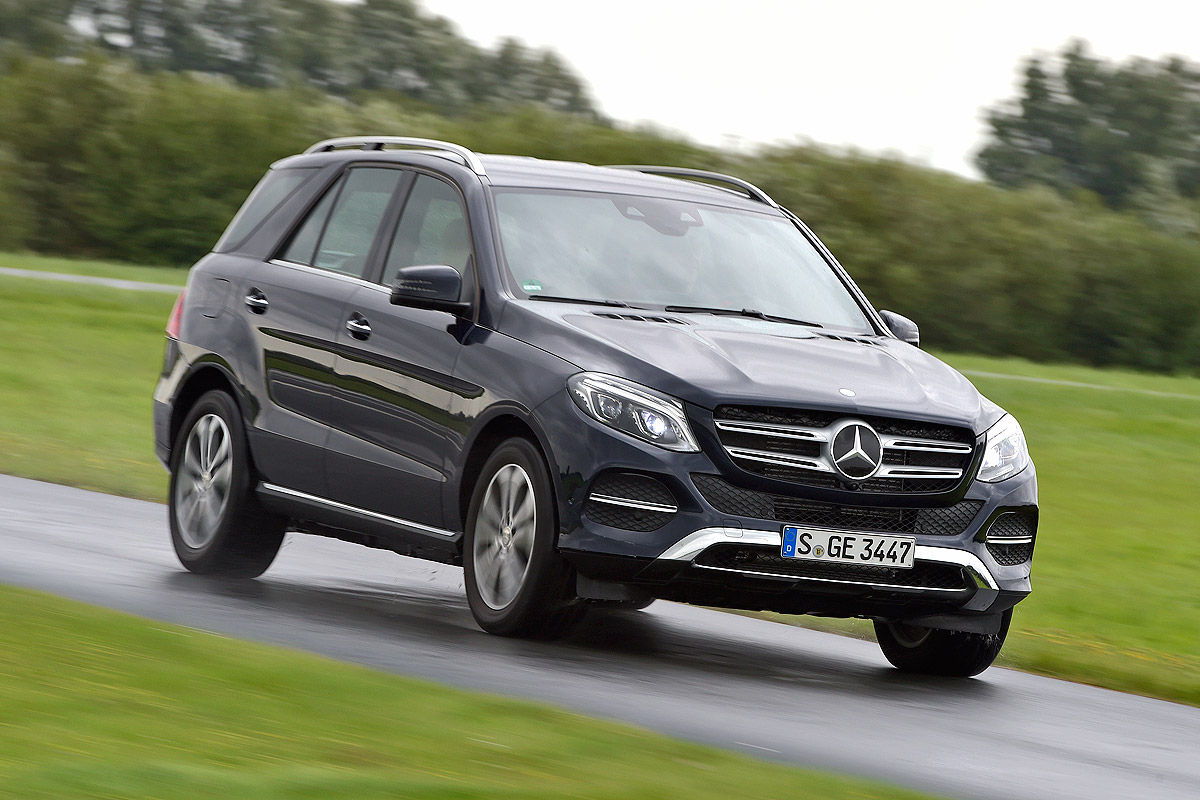 Whether a fresh look and an all-new name can make the ML a better car, remains to be seen. What is clear is that the 2016 Mercedes-Benz GLE makes a stellar impression doing what it knows best – its job as a full-size, luxurious but family friendly SUV. Ok, others brag about offering more space, but none of them can match the mighty Merc in therms of trunk space: 2.010 liters with all the seats down. Poor surfaces should be a piece of cake for the master of comfort GLE. Should be, ’cause the big Merc is in fact rather unsettled and reeling. It all comes down to the classic suspension, apparently, as AIRMATIC equipped GLEs are clearly superior in this regard. The GLE is also not what you’d call a sporty SUV, this despite the refreshingly communicative steering. The 258 hp 3-liter diesel proves to have a relaxed nature which matches well the philosophy of a brand which tends to put comfort and satisfaction above all. If there is one thing below reproach that would be the nine-speed automatic gearbox. Slow by today’s standards, it does save face with its ability to keep the engine idling at most time for the sake of fuel consumption and refinement. Dynamic ambitions are hardly present, but the GLE doesn’t bother us with that and prefers simple honesty. 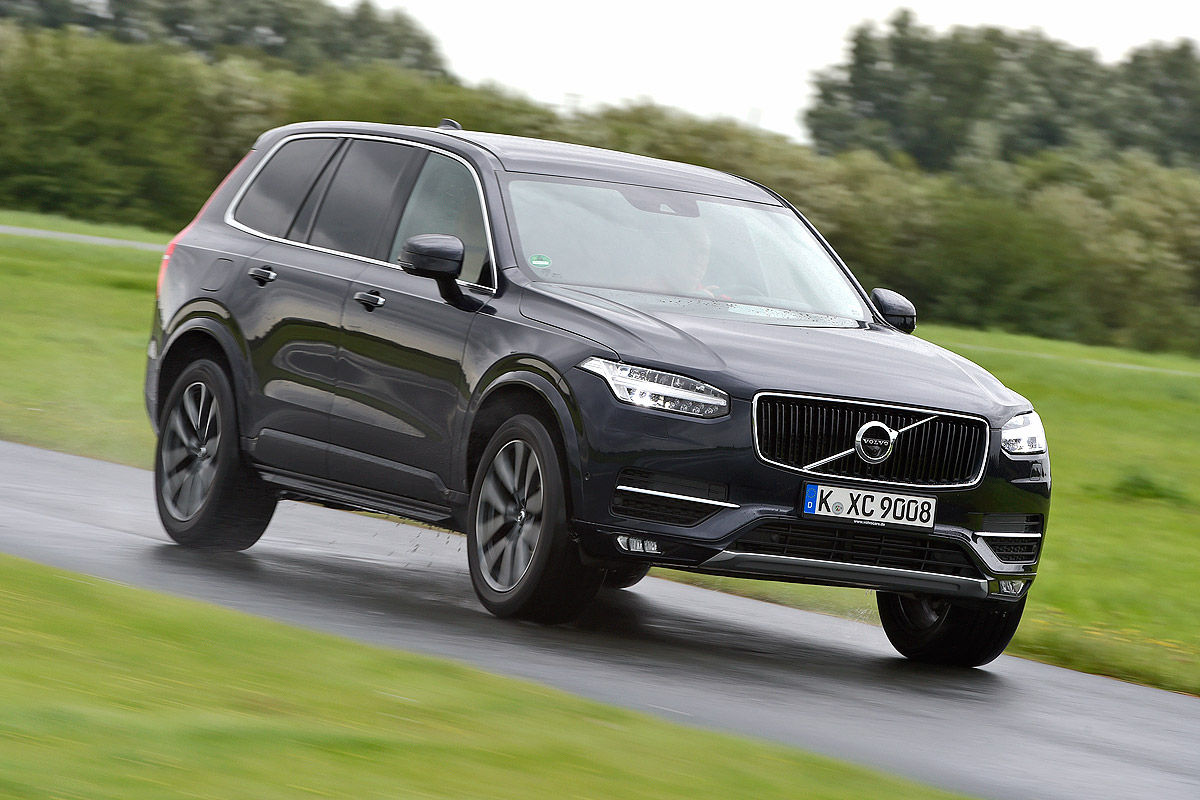 Rudolf the red nosed reindeer… The Volvo XC90 is not exactly red nosed. Unless you take into consideration its minuscule 4-cylinder engine. Minuscule compared to the big-ol’ V6 powered contenders it has to face in this test. With 225 hp on paper it’s not that bad, though. Yes, the XC90 often sounds boomy and is the slowest of the bunch, but it can also hold up pretty well, hitting the 100 km/h mark in 8,3 seconds on its way to the maximum speed of 220 km/h. All this while needing only 7,4 l/100 km – the best value next to the V6 powered Q7. Comfort is also Ikea style. All passengers sit on tidy cushions and are greeted by a huge trunk (721-1.886 liters). The cockpit has an overtly modern appearance with all major controls reunited under a tablet-style touch-screen in portrait format. Tesla style! The menu is not always the best example of logic and simplicity, but you get used to it faster than you’d think. If there’s one thing the XC90 dislikes that is bad roads. The stiff suspension keeps the car well-balanced in corners, but can’t cope well with bumps in the asphalt. Agility is good, very good, all thanks to the light engine which keeps the scales in check and helps the Volvo achieve the lightest mass here. 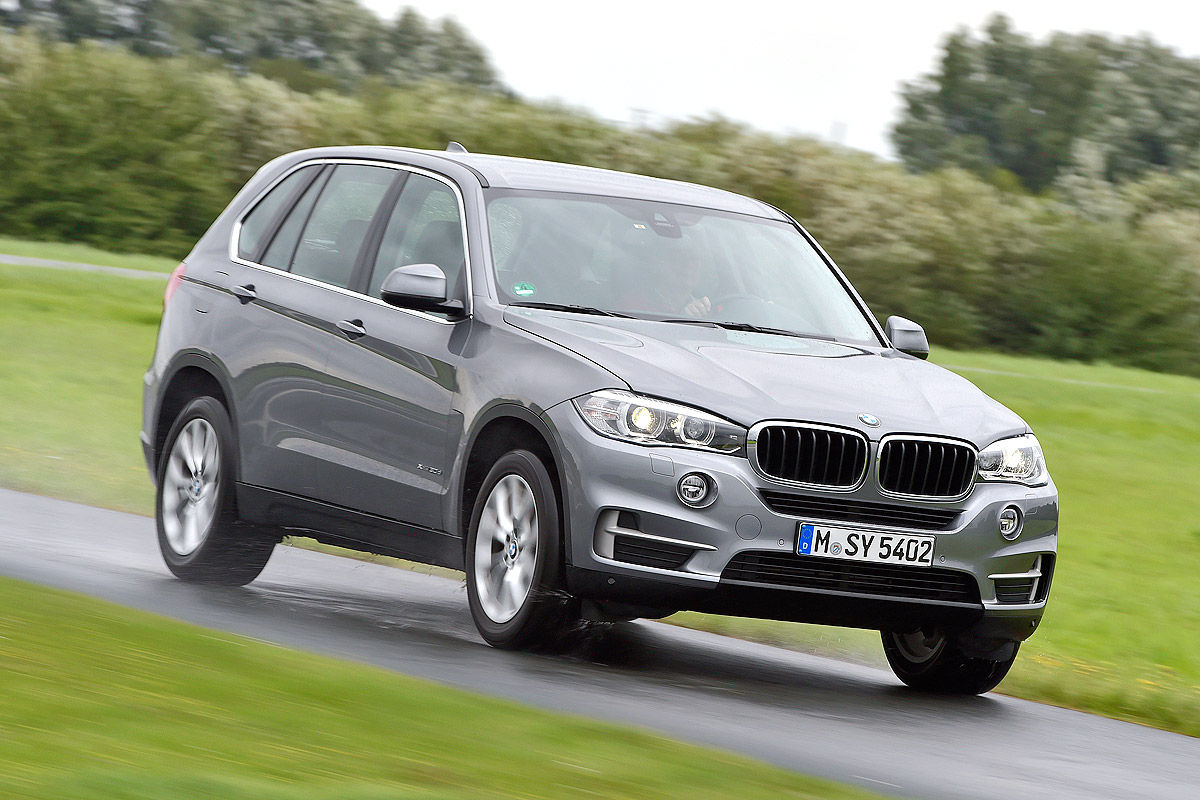 The sports car of SUVs. This is what the business card of the BMW X5 reads. There is a trace of truth in it though. Despite its class-norm 2,2 tonne weight and 1,76 m in height, the bulky Bimmer is happy to attack any corner you throw it at and it does so with fine, carefully balanced steering. Furthermore, the 258 hp L6 is full of life at any rev, steaming ahead of all its competitors in real life – and in 6,5 seconds to 100 km/h. The braking distance from the same speed barrier is also the best in test: 35 m. Why not the first, then? The X5 is really down on space, especially in the rear. In addition, being overtly sporty can only spoil the comfort and the firm suspension proves the theory. A family car and especially a luxury SUV should offer more compliance. The X5 compensates with great seats (though expensive and always optional) and a thoughtfully laid-out cockpit. Only the two-part tail-gate remains somewhat eccentric. 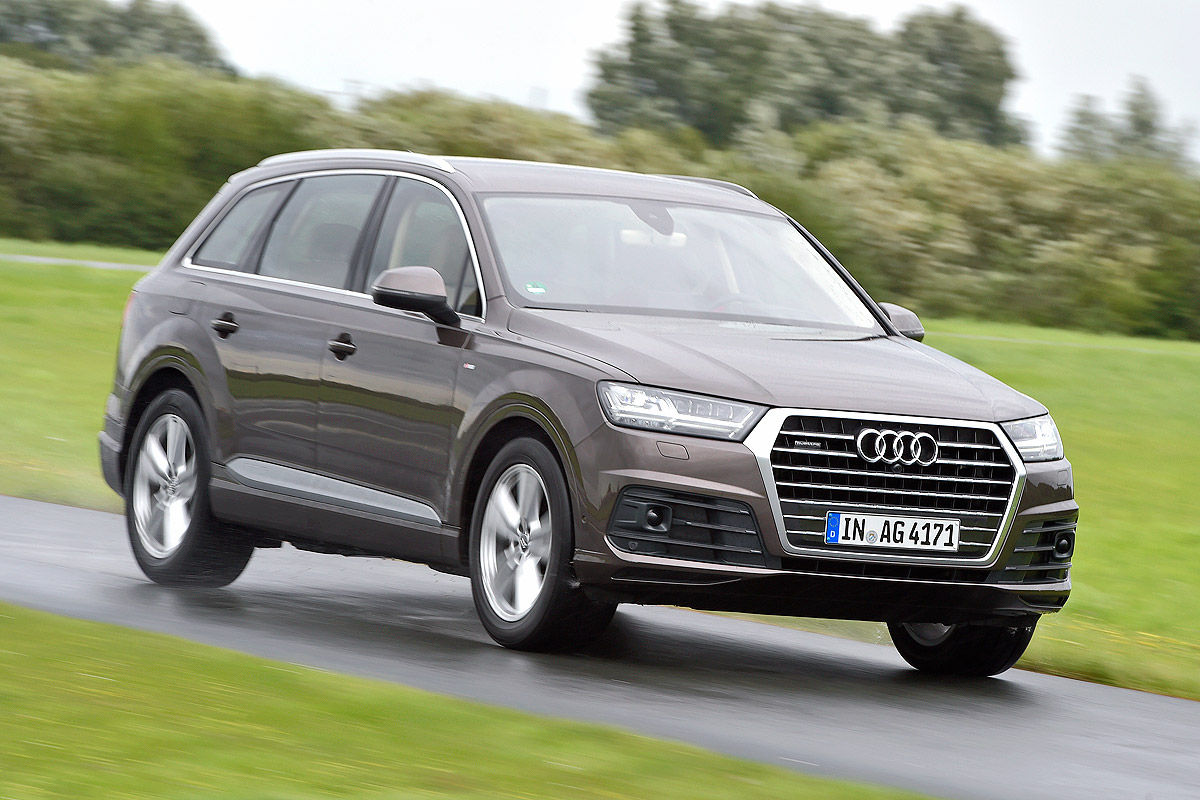 Abracadabra! The Q7 is the best here. How did Audi pulled it off? With 5,05 m in lenght, the Q7 is clearly the longest car and also the proud owner of the roomiest interior – front, back, trunk, everything is king-sized. Its weight is also lower than before. Much lower, giving the Q7 the oomph it needed to feel pleasantly agile and sporty. And the all-wheel steering system certainly helps too. Only 6,5 seconds is what keeps the Q7 apart from the 100 km/h mark, while the consumption is kept reasonably low at only 7,4 l of diesel for every 100 km. Stopping power is also mad at only 33,7 m from 100 km/h. For the most dignified travel amenities in the test, the Q7 appeals to such tricks as comfortable seats and the surefooted air suspension costing 2.050 euro. So, the Q7 is basically flawless? No, not at all. Operation requires familiarization and the price tend to go upwards faster than a bullet! 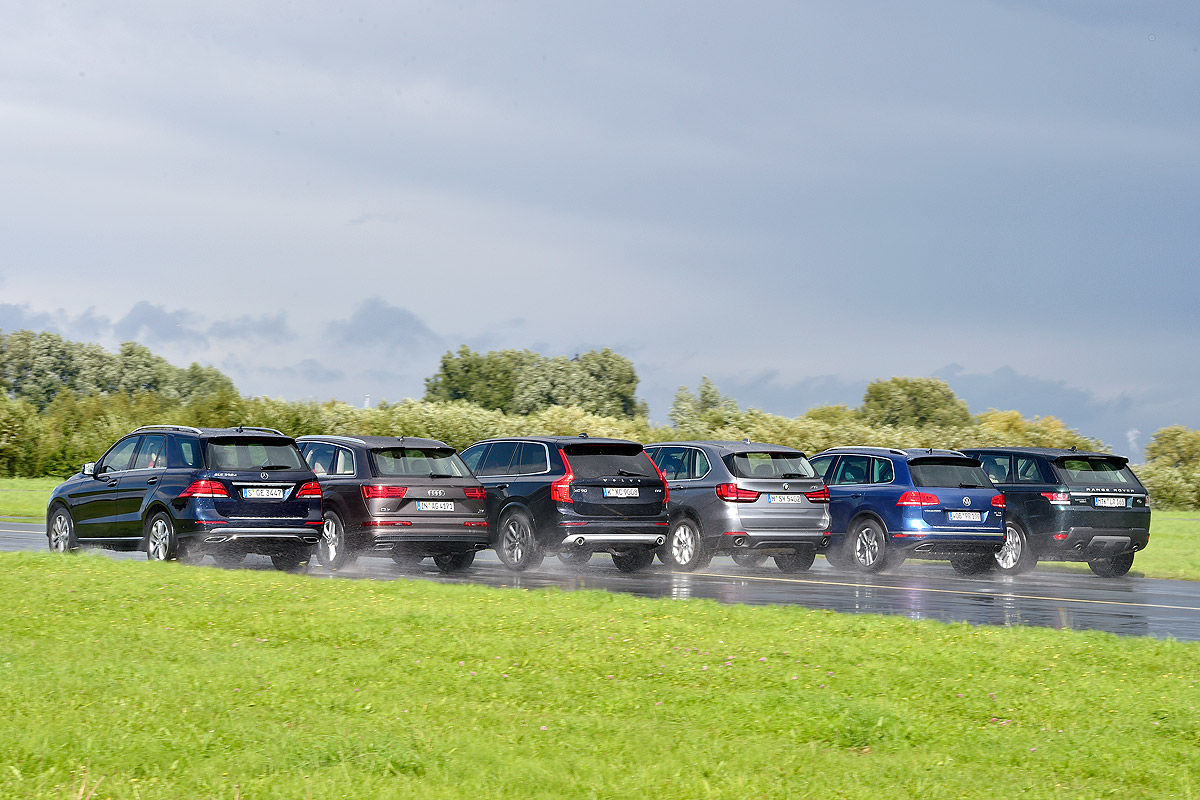