The silver prototype’s light camouflage reveals the definitive shape of the front-grille and the headlights which are now clearly visible. Styling-wise, the all-new 2016 E-Class gives us the expected C-Class and S-Class vibes. The E-Class is only eerily similar to its bigger/smaller siblings, a clear separation line being drawn by its tauter, slightly sportier proportions.

Mercedes plans two distinct front-end treatments. A traditional chrome grille is set to adorn the basic models with a more sporting blade grille reserved for the sportier Avantgarde line. The presence of the big starry emblem supported by two chrome bars in the current batch of spy shots signals that this is in fact an Avantgarde model. Earlier spy pics have also show the AMG line model, given away by its wide, gaping lower air-intake.

The new pics also give the first-ever glimpse at the interior. The shots show that its layout is set to rely heavily on the bigger S-Class for inspiration, complete with dual LCD screen instruments, round vents finished in chrome and rotary touch-pad controlled COMMAND system with fresh menu structure and augmented reality functions. The speedo visibile seems to be the more basic, classic analogue version, though, with the full digital variant left on the options list. 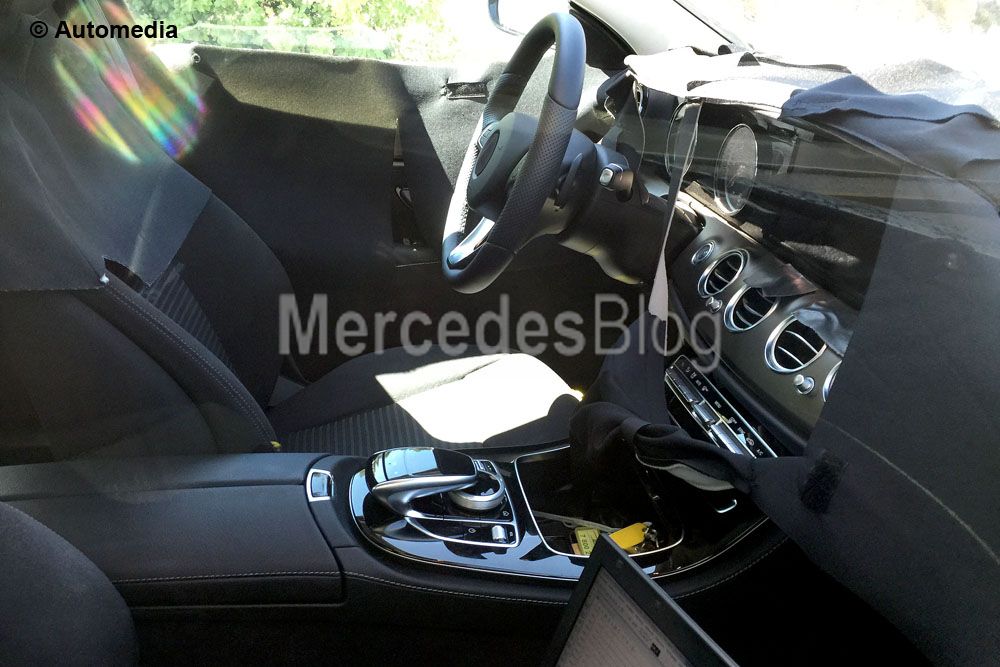 The all-new E-Class will share more than its design cues with the C-Class. The MRA modular platform is in fact identical with only the wheelbase slightly extended for superior interior space. Thanks to this new platform, which consists among other things of aluminum, the E-Class will lose quite a few kilograms with the total weight of the model said to top a maximum of 1.5 tonnes.

The engine line-up will also mimic the smaller C-Class. The base 4-cylinder engine will be lifted straight from the smaller sibling, while an all-new generation of diesels (OM654) are set to replace the current OM 651 range. Following BMW’s lead, the new units will be developed on the modular principle as three-, four-, and six-cylinder units constructed from a multiple of identical 0.5-liter cylinders.

Mercedes is also said to be going back to its L6 roots, developing a new twin-turbo inline-6 engine (M256). This is expected to replace the current V6 units and develop as much as 430 PS. At the top of the range will sit the AMG sourced 4.0-liter bi-turbo V8 in slightly detuned form and 421 PS, effectively replacing the 408 PS 4.7-liter found in today’s E500/E550 models. The AMG 63 model will also receive the very same AMG GT sourced engine (without the dry sump lubrication), but in top 510 PS guise.

But, wait. This is not all! The all-new MRA platform can also support engines as small as the 3-cylinder units so expect the all-new 2016 E-Class to feature such downsized units as soon as 2017.

The commercial debut is slated for early 2016, which can only translate to an official premiere at next year’s Detroit or Geneva motor show.