A contemporary interpretation of stylistic elements lifted from the original SLR and design details taken from the 2003 Formula 1 Silver Arrows makes the 21st century SLR a bridge between the past and the future.

With no roof and no windscreen, the limited edition ‘Stirling Moss’ has plenty of features to brag about though: its 5.4-liter V8 engine delivers 641 HP makes the car run the 0-100 km/h sprint in just 3.4 seconds.

The car is registered in Switzerland, only had one previous owner and covered just 7,200 kilometers since delivery.

The next best thing at the auction organized on the ground of the Mercedes-Benz Museum in Stuttgart was the 1926 MERCEDES-BENZ 24/100/140 PS MODEL K La Baule Transformable, sold for €862,500.

The car that has just turned nine decades has been bought and restored by a collector in the 70s. The owner who gave it away at the Bonhams auction snatched in 2007.

Delivered to Hollywood, California, in the early 50s, the Mercedes-Benz 300 D ‘Adenauer’ Cabriolet, it was, at that time, one of the few vehicles able to carry six passengers.

It was the car of choice for the politicians of the highest rank and it got its name ‘Adenauer’ from its most famous ownert: the West German Chancellor Dr. Konrad Adenauer.

The Mercedes was one of the most expensive automobiles of its day. The cherry red classic was restored in 2015.

Romanian dictator’s car was sold for €49,450 at the auction organized at the Mercedes-Benz Museum in Stuttgart. The 1973 Mercedes-Benz 350 SL Convertible with Hardtop was actually a car purchased by Nicolae Ceausescu for his daughter Zoe, but yet, it came with a security system installed by the Romanian Secret Service Police. 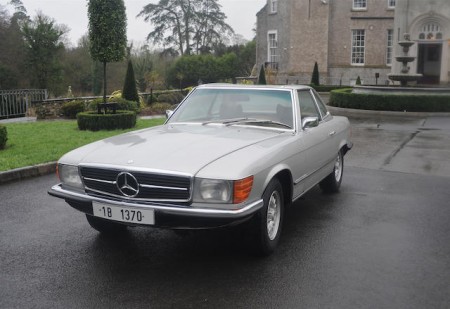 All the €49,450 Bonhams got for the Mercedes-Benz 350 SL Convertible with Hardtop will go to the “Cross cause”, a foundation helping special-need orphans in the Eastern European country.