The first season of the new FIA GT Championship in 1997 ended with a one-two victory for AMG Mercedes: Race driver Bernd Schneider won the title driving the newly developed Mercedes-Benz CLK-GTR racing touring car, which was developed in an extremely short space of time starting in December 1996. And the AMG Mercedes team won the constructors’ title.

The production race car was also built as a street-legal super sports car in a micro-series of just 25 vehicles. The CLK-LM was built for the 1998 season based on the winning car of 1997. It again won a one-two victory: AMG Mercedes won the constructors’ title, the championship was won this time around by Klaus Ludwig, the runner-up of 1997.

The Silver Arrows shine once more: When the FIA GT Championship was founded in 1997 as the successor to the BPR Global GT Series, Mercedes-Benz competed with the new CLK-GTR racing touring car. The vehicle was developed, built and ultimately used in the championship together with motorsport partner AMG.

The CLK-GTR with the silhouette of the production Mercedes-Benz CLK (C 208) was created in an extremely short space of time: AMG was tasked with building the vehicle on 5 December 1996, the first test of the V12 engine on the test bench already took place on 21 December. Two days after that, AMG commissioned the monocoque made of a laminate of carbon fibre and Kevlar. The first vehicle was completed on 26 March 1997 with the first test drives on the Spanish Circuito del Jarama racetrack near Madrid conducted by Bernd Schneider, the later world champion, taking place two days later.

In addition to Schneider (1995 DTM champion), the drivers for the 1997 season also included Klaus Ludwig (1992 and 1994 DTM champion). The two extremely successful touring car experts duelled for the championship. On 11 May 1997, Schneider and Alexander Wurz finished in second place at the British Empire Trophy on the Silverstone Circuit (Great Britain). On 29 June, Schneider and Ludwig won the 4-hour Nürburgring race ahead of their team mates Alessandro Nannini and Marcel Tiemann. 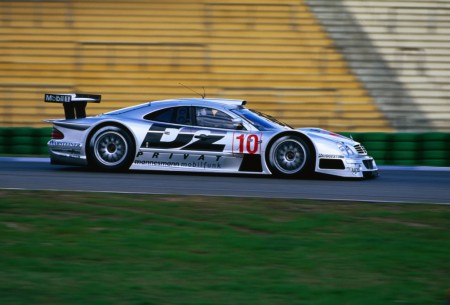 A special feature of the mid-engine race car with its V12 engine of type GT 122 (5986 cc displacement) rated at464 kW (631 hp) is its design as a production race car. According to the FIA (Fédération Internationale de l’Automobile) regulations, the car also had to be built as a production vehicle at a minimum quantity. As a result, 25 vehicles of the highly exclusive street-legal CLK-GTR (C 297) were built. However, the buyers of this 320-km/h super sports car did not get the engine of the race car derived from the M 120 with dry-sump lubrication and other optimizations such as titanium connecting rods and valves. Instead, the production vehicle was equipped with a 6.9-litre V12 series engine of type M 120 rated at 450 kW (612 hp).