In 1997, Mercedes presented at Tokyo Motorshow Maybach concept, which revive the renowed name Maybach with the series version produced from 2002 on.

On one side, the Maybach concept presented at Tokyo Motorshow in autumn 1997 was a tribute to Wilhelm Maybach, the famous engineer who worked with Gottlieb Daimler and to his son Karl Maybach who built luxury cars between 1920s and 1930s and on the the other side represent an offer to the many Mercedes customers who demand more luxury than an S-Class.

Because the concept was received very well by the public and because Mercedes want to have a competitor against Rolls-Royce, which enter under the umbrella of BMW in that years, Mercedes decide to not only create an ultimate luxury model but to revive the famous brand Maybach. So, the first handcrafted models which left the Maybach production line in Sindelfingen in 2002 did not wear the Mercedes star but the Maybach ”double M” logo.

With 5.77 metres, the length of the concept exceeded with 56 cm the length of long wheelbase Mercedes S-Class, it was 6 cm taller and 6 cm wider, meanwhile the wheelbase was exactly 40 cm longer. 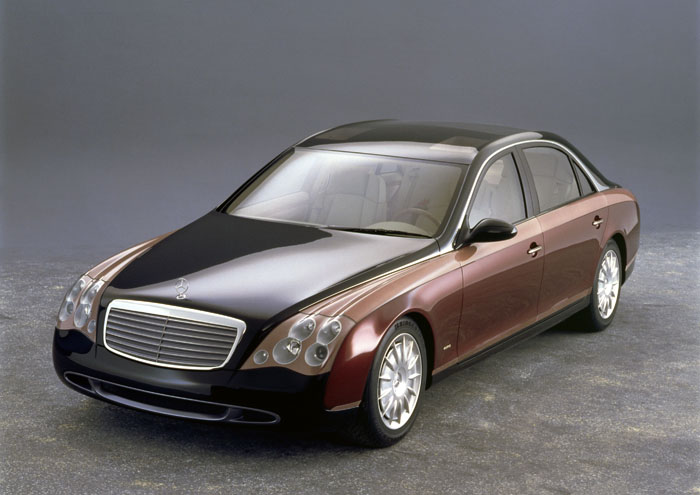 The design was done by Daimler-Benz Design Center in Japan and include two-tone paintwork, refined interior materials like plush materials like cream coloured leather, select wood, high-grade metal trim  and a lot of high-tech features.

The focus was on the individual rear seats. The right hand seat reclined like the first class airline seat, featured a large thigh support and swivelling footrest and entered in the series production on long version Maybach 62.

The left hand rear seat with a comfortable reclining position was adopted in the Maybach 57 (code name W 240), which was almost as big as the concept presented at Tokyo.

The concept from Tokyo was packed with a lot of comfort, luxury and high-tech features.

In the rear there was a bar with hot and cold drinks, a humidor for cigars, a high-end communication system with three telephones and a high-end entertainment system.

One of these served exclusively as a data line enabling the onboard personal computer to access the Internet, e-mails or an office network, so that passengers could carry on working while they were in transit. The second telephone allowed the chauffeur to take calls and route them through to a separate receiver in the rear. The third telephone was exclusively for the private use of the rear-seat passengers.

Technically, Maybach study was a piece of art of german engineering featuring an electrotransparent glass roof which could become transparent or translucent by applying a voltage to a conducting polymer layer situated underneath the glass, an active suspension with electronically controlled spring and damper at each wheel and bi-xenon headlamps with Active Light System, which was the predecessor of the today’s Intelligent Light System.

The bodyshell was an innovative light hybrid construction which use fibre composites, aluminium and magnesium, meanwhile the engine was the famous 6 litre V12 with cut out technology (6 cylinders were cut at partial loads) which was introduced in 1998 Mercedes S-Class (W220).

1997 Maybach study went in series production in 2002 in Sindelfingen plant. Two versions were offered at the start: Maybach 57 and Maybach 62 named after the length of the car. Later, S versions were available as also the exclusive and ultimate luxury Landaulet version.

But Maybach was  not very successful and the world crisis from 2008 affect the sales. Hard times came out for Maybach and at the end of 2011, Mercedes-Benz decide to cease the brand. But in the same Mercedes make a promise that the new generation S-Class will replace with its numerous versions the loss of Maybach brand.

And at 2014 Los Angeles Auto show Mercedes presented the Mercedes-Maybach S-Class which took over the comfort facilities for the rear seats from the Maybach 62 and revive the brand Maybach as a Mercedes-Benz sub-brand like is the case of the  AMG division.