1955 – The most successful racing season for Mercedes-Benz

1955. The year the 300 SLR driven by Sir Stirling Moss won the legendary Mille Miglia. The year that Juan Manuel Fangio won his second Formula One title for Mercedes-Benz. But there was also the iconic Targa Florio in Sicily, the stage that shook the world of motorsport and put the Mercedes-Benz cars in the first and second spot, just in time to win the World Sports Car Championship. 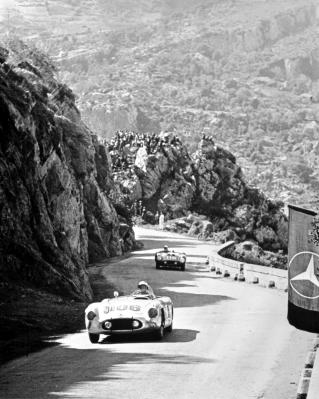 All these races had something in common: it was the 300 SLR, closely related to the Formula One racer. It was the car submitted by Mercedes-Benz for the six-race series. Mercedes chose not to compete in the first two races, the 1000-kilometer Buenos Aires and the 12-hour Sebring. Therefore, the first public appearance of the 300 SLR was in May, in the Italian Mille Miglia, the legendary competition won by Sir Stirling Moss, ahead of his teammate, Juan Manuel Fangio.

The 24 Hours of Le Mans was set to follow in June for the 300 SLRs. But after the worst accident in the motorsport history, when 83 spectators and driver Pierre Levegh perished at the scene, the race-leading 300 SLRs were withdrawn out of respect for the victims. Now winning the title came close to impossible. 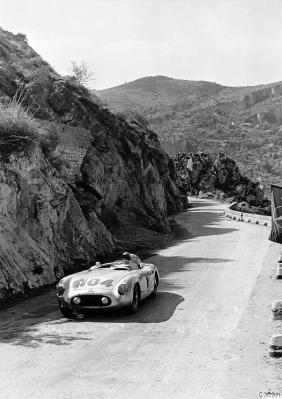 In September 1955, at the International Tourist Trophy in Northern Ireland, the 300 SLRs knocked down the first three spots, but the points scored in Dundrod were still far from enough, as Ferrari was still in the lead. The Italians only needed a second-place finish in the last race of the season to get the title, a home race for them. Even worse than that, Mercedes-Benz needed to get the first two leading positions in Targa Florio.

The grand finale in Sicily

October, 16th, 7 a.m. All cars lined up. Mercedes-Benz would go for all or nothing in Sicily, on the 72-kilometer circuit with 900 curves. Due to the length of the circuit, it was the first time for the Stuttgart brand to use radio communication. 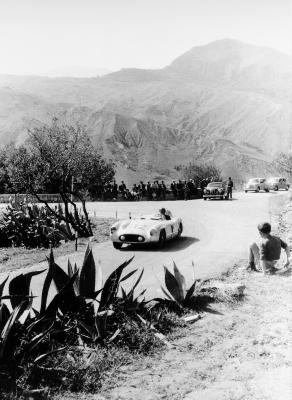 Stirling Moss started out well, with a dazzling pace, but, on the third lap, he came off the road and his team dropped back to the third place. But by a miracle, six laps later, the Silver Arrow was back in front. The Kling/Fangio team was right behind them and everything seemed to go according to plan. But something hit out of the blue. A jammed tank cap kept them in the pits and the Ferrari team made by Eugeno Castellotti/Robert Manzon took their second place in the race. 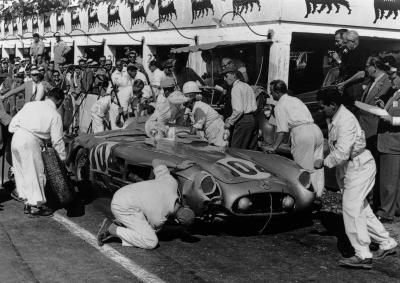 But Fangio started the chase and closed in on the Italian squad kilometer by kilometer. Luck was on his side, as Manzon clipped a rock in the eleventh lap and was forced to enter the pits for changing the flat tire. Fangio traded on it, got his second place back and kept it all the way to the end. A magical end for Mercedes-Benz after a race won by Moss/Collins. Mercedes won the Word Sports Car Championship just one point ahead of Ferrari. 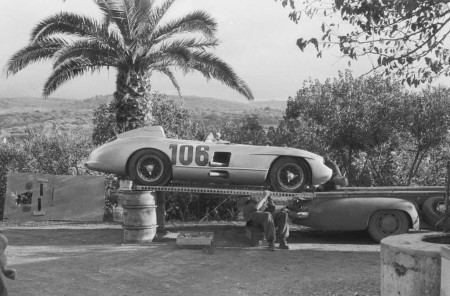 The Stuttgart company decided to step off the stage of the motorsport next year, to everyone’s surprise. That is the reason the coupe version of the 300 SLR, known as the “Uhlenhaut Coupe” never got to race.

Shorthanded on specialist staff, it was five days before the historical victory in Targa Florio when the Board of Management from Mercedes-Benz decided to pull out of motorsport, in order to devote the considerable engineering expertise to the development of production vehicles. The decision was kept a secret until after the race. 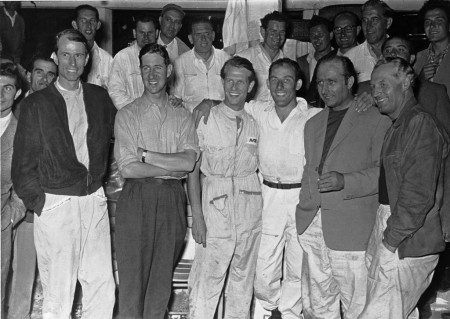