The Mercedes-Benz classics must have some kind of magnet for awards. Here they go again! A 1937 Mercedes-Benz 540 K Sport Cabriolet A won the Best in Show trophy at Concours d’Elegance in Arizona, USA.

The classical beauty is the property of Thomas Taffet of Chatsworth, a collector of vintage automobiles living in California. The car, that had been awarded a similar prize last year in the Pebble Beach exhibition, first won the European Classics class of the competition and then went straight to number one to beat all other class winners.

It was a tought contest, as the 1937 Mercedes won by the narrowest of margins. It was a photo finish with a post-war sports car, a Ghia-bodied 1952 Fiat 8V Supersonic, owned by a super rich Beverly Hills, California resident, David Sydorick, a retired investment broker. The former broker also owns a car thought to be one of the oldest Ferraris in the world: a 1947 Spyder Corsa.

The 540 K Sport Cabriolet has traveled a long sinuous road along its 78-year lifetime. It was acquired by Taffet in 2010 and immediately sent off to Jim Griswold, a car restoration expert in Oregon, for a complete make over. The car is to be auctioned soon at the Biltmore auction. The catalog of the session reports an estimated value of $3,4 to 4 milion dollar, but the trophy will definitely boost those numbers. 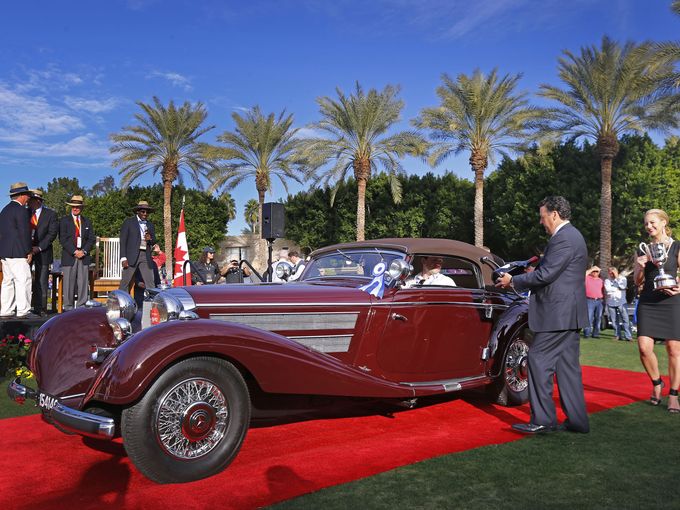 One of the competition officials pointed out that the 540 K is not what it seems to be. „It is a special cabriolet A, but really it isn’t. It is built on the special roadster chassis, but with the radiator behind the front axle. Only ten of these were made. It was the highest-end car available from Mercedes-Benz at the time”, said Michael Kunz from Mercedes-Benz Classic Center in California.

The Benz is powered by a supercharged 5.4-liter 8 inline cylinder engine. It was ordered decades ago by a car enthusiast, Martha Jordan, in Paris, but eventually delivered to her home in Germany. Years after that, she moved to the United States and took the Benz with her. Ever since than, the automobile was owned by several American collectors. It returned to Europe in 1996, brought by a German, Alfred Richter. He sold it to Taffet 14 years later.