The new Mercedes S-Class celebrates its world premiere at the Auto Shanghai with a completely new revolutionary engine generation, new comfort and wellness facilities and an evolution of the Intelligent Drive semi autonomous drive system. The market launch of the new S-Class starts in Europa in July.

Since 2013, Mercedes-Benz sold well over 300,000  S-Class saloons. The flagship from Mercedes-Benz was again in 2016 the best selling luxury saloon in the world.

The facelift presented at Shanghai Auto Show is very comprehensive because the modification areas include the whole car from the new engine generation, suspension and design. 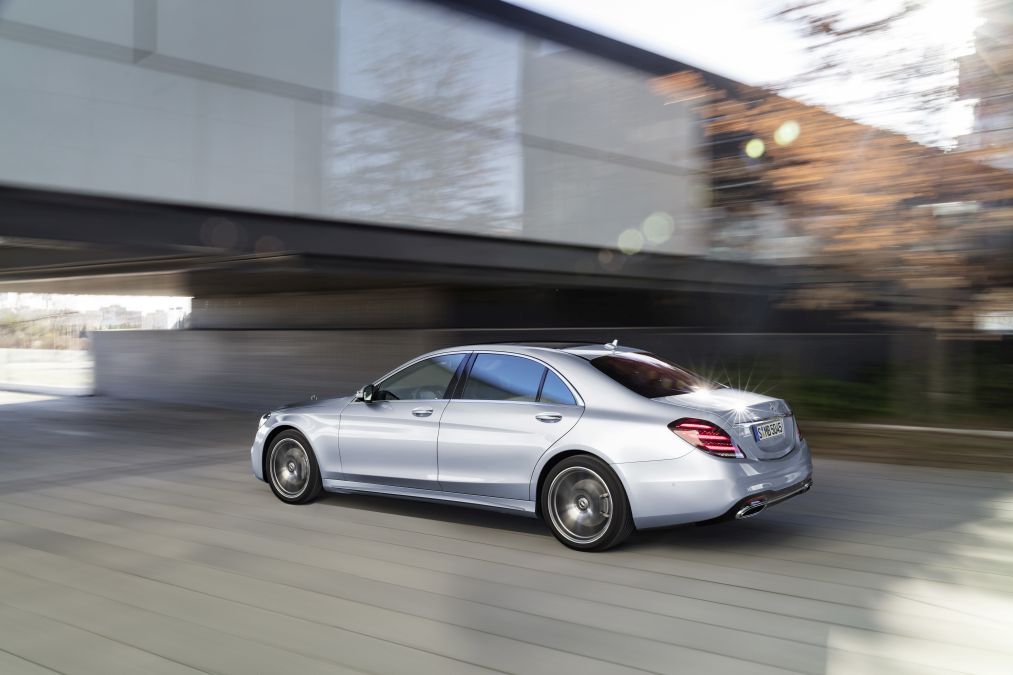 In conjunction with the new MULTIBEAM LED headlamps, the S-Class features three distinctive torches of light as an exclusive design element. The front bumper with pronounced air intakes and sporty looks is also new.

The new LED lamps with crystal-look tail lamps stand out at the rear. They look like jewels and ensure a characteristic design day and night. A tail lamp light show that plays when the vehicle is unlocked and locked, as well as three horizontal pairs of fibre optics are also new.

All models are fitted with a redesigned lower bumper section with integrated visible tailpipe trim. The tailpipes are framed by a chrome trim element, which spans the entire width of the vehicle. Seven new light-alloy wheels with diameters between 17 and 20 inches are available as standard or options.

The dashboard and the ergonomic concept carry over the layout from the new Mercedes E-Class with the two new high-resolution displays, each with a screen diagonal of 12.3 inches placed under one glass cover blend. The driver can choose from three different display styles (“Classic”, “Sporty” and “Progressive“) and also configure the information and views relevant to them at will. The new S-Class has two touch-sensitive controls in the steering wheel. They respond to swiping motions like the screen of a smartphone and enable the driver to control the entire infotainment system without having to take their hands off the steering wheel. From the left one you can control the digital display of the instrument cluster and from the right one you can manage the multimedia system which can be operated also with the classic controller and with the touchpad placed above the controller.

In a world premiere, Mercedes-Benz offers an integrated system for the comfort facilities. It systematically uses the functions of the climate control system (including fragrancing) and the seats (heater, ventilation, massage), the wall heating as well as lighting and musical atmospheres, and enables a specific wellness set-up tailored to the mood and need of the customer. This enhances the physical comfort and performance while driving and during a break. ENERGIZING comfort can be experienced in all seats, dependent on the equipment.These six programmes can be selected: Freshness, Warmth, Vitality, Joy, Comfort and Training.

But the big revolution is under the hood where we will find the completely new engine generation. 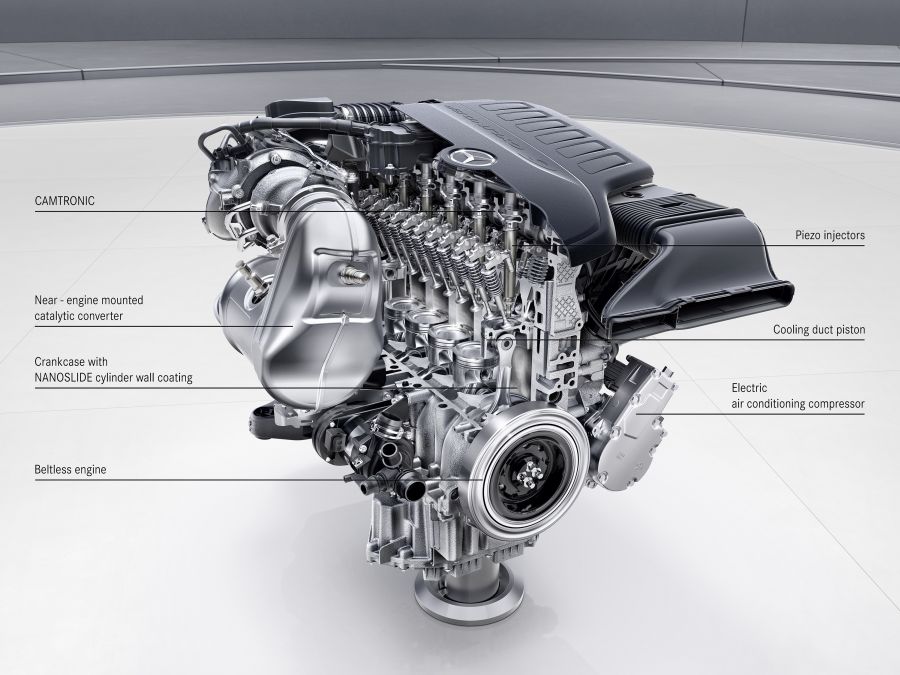 Why Mercedes replace the V6 with 6 inline engine? We thought the main reason is the fact that a 6 inline engine offers a better balance for the second stage vibrations. But Mercedes disclosure the real reason and this is reffering to the emissions. The inline configuration is more favourable regarding positioning the components for efficient emissions reduction.
The new 6 inline cylinder diesel engine (OM656) belongs to the same family with the 4 cylinder engine (OM654) launched last year on the new E-Class. It uses the same aluminium block and the steel pistons. As a top technology, the new OM656 engine has, as a world premiere, Camtronic variable valve-lift control, first time on a diesel engine.

The new engine (code name M176) replace the former 4.7 liter V8 bi-turbo and was developed by AMG. With Camtronic variable valve lift and dezactivation of the four cylinders at partial loads, the new engine with both turbos inside the V needs 10% less fuel (8.5 l/100 km, emissions of 193 g/km CO2) while delivers more power and the same torque: 469 HP and 700 Nm compared with 455 HP and 700 Nm. 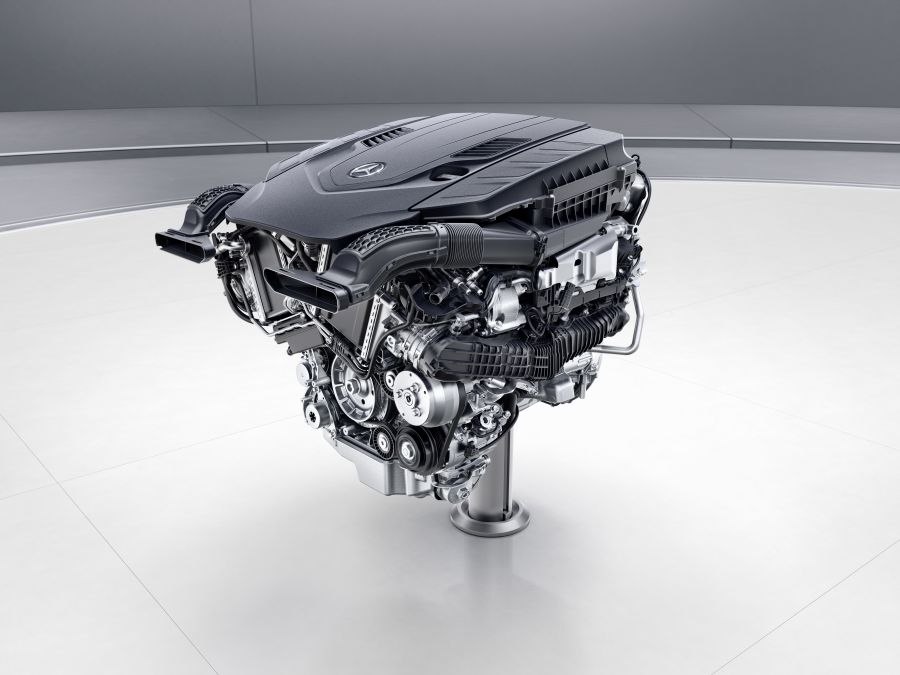 A new S 500 e Plug-In hybrid version will follow with a much bigger battery of 13.3 kWh instead of 8.7 kWh which will allow an electric range of 50 km instead of 33 km. The new battery can be charged quicker at 7.2 kWh network.

Two new important innovations are offered also for the suspension.

The S-Class made a technological statement of superiority in 2013 with Raod Surface Scan. The system detects bumps ahead of the vehicle and adjusts the Active Body Control suspension accordingly. In the new S-Class this suspension control is further improved: The stereo camera of the system now scans the road even more thoroughly, even in dusk and at speeds up to 180 km/h instead of 140 km/h before. Another comfort enhancement is the curve-tilting function, taken from the S-Class Coupe and available in the S-Class Saloon for the first time. The body tilts to the inside of the turn by up to 2.65 degrees and thereby reduces the centrifugal forces perceived by the passengers.

In the assistance systems list we find now the Distronic Active Proximity Assist which adjust the speed automatically ahead of curves or junctions using the navigation data. Another premiere is the Remote Parking Assist taken also from the new E-Class which allow the driver to driver to manoeuvre the vehicle into tight parking spaces or garages by smartphone, so as to facilitate getting in and out. It is a system similar with BMW 5 and 7 Series with the difference that Mercedes use an application on a smarphone while BMW use the intelligent key of the car.