This is the first performance hybrid car by AMG: the Mercedes-AMG GT Concept has just been presented in Geneva. It is an anniversary present for Mercedes power house, 50 years after it came into the world. The show car gives a sneak preview of the exterior design of the coming series production model.

On the road to electrification, the Mercedes-AMG GT Concept comes as the 3rd model completely developed by AMG. It is hybrid performance at its best, because it is supposed to hit jaw-dropping figures. An independent electric motor on the rear axle, combined with a 4.0-liter V8 combustion engine and ultra-light performance batteries, smaller and lighter than the common hybrid batteries, are all brought together for a system output that exceeds 800 HP. It is a further proof of the systematic way in which the AMG Lightweight Performance Strategy is being implemented. 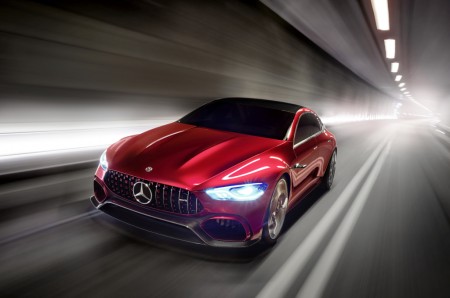 The battery charging on the move is supplied via brake recuperation. The conventional engine makes sure that the energy level never goes below a certain threshold. It is the first AMG car to be granted the EQ power, a technology lifted from this year’s Formula 1 racing cars and that Mercedes is planning to extend across its entire hybrid range in the near future.

The AMG performance 4MATIC+ all-wheel drive is also supported by the electric motor. The system drives the rear wheels directly and has the effect of an additional booster. Besides this, according to the principle of Torque Vectoring, every wheel can be allocated torque individually. 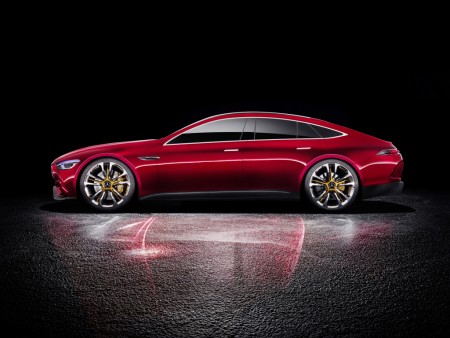 Three running modes can be preselected via the electric drive unit: the AMG GT Concept either drives purely electrically or only with the combustion engine, or it combines both drive sources with one another as a hybrid.

You would probably expect silence from a car powered by a hybrid system. Well, guess again. The Mercedes-AMG GT Concept howled and growled on the Geneva stage, showing that it’s got a voice in the market and is going to use it. Porsche Panamera S Hybrid, watch your back now!

The uber powerful 4-door coupe is a genuine predator, set to run from 0 to 100 km/h (60 mph) in less than 3 seconds, just like any super sports car out there, says Ola Kallenius, member of the Board of Management of Daimler AG. 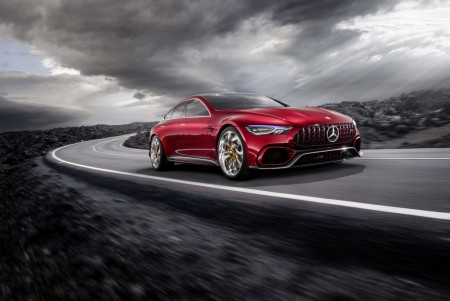 With muscular proportions and sensual lines, the new member of the ever growing AMG family, 4-door GT concept has the looks to match the breath-taking figures. The front end of the car is like nothing that you have ever seen in the Mercedes line-up. It does carry the Panamericana radiator grille, typical for the latest AMG models, with the three-pointed star supported by the thin vertical blades, featuring gaping air inlets and active aerodynamic elements for a better air flow and – what is new for the Affalterbach-made models, 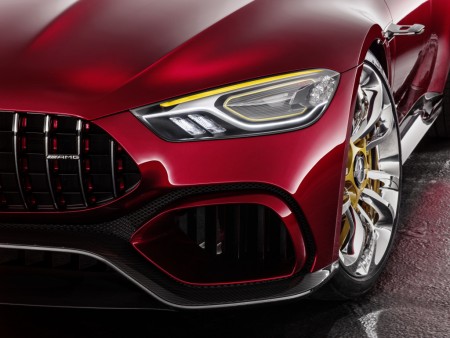 narrow angular headlights. The elongated hood that reaches all the way to the wheel arches, comes with powerdomes that highlight the fact that it hides the impressive horsepower previously mentioned.

And speaking of lights, the LEDs are out and lasers are in! The 4-door sports car is the first of the company’s vehicle to come with the laser “nano active fiber technology”, with multi-layered high-tech components. The 3D illumination effect provides the AMG GT Concept a unique light signature. The turn indicator light is fitted at the top edge, featuring a serial rapid sequence (“flashing light indicator”). Two tubular rod lights supply the necessary light for the road surface in front of the car.

The concept comes with a profile line specific to the coupes, as the roof harmoniously slides to the sexy posterior, making room for a new set of rear doors with typical-coupe frameless windows. None of the doors come with conventional handles, but with sensor-based technology. The broad rear shoulders in the area of the flared wheel arches reinforce the muscular proportions of the GT.

Strikingly, just like the longest coupe in the world, the Mercedes-Maybach 6 Concept, the GT Concept features no side mirrors. 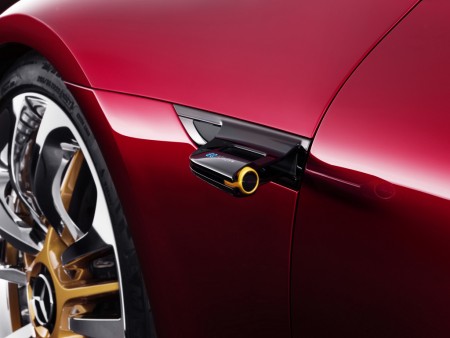 Their function is lifted by the exterior miniature cameras known as mirror cams, mounted on the front wings.

From behind, the extremely narrow taillights and the single exhaust pipe integrated in a wide carbon-fiber air diffuser curbed downwards at the sides, highlight the sporty character of the family GT. A ribbed cooling module is integrated into the lens of the tail lamps to guide the waste heat to the exterior.

The multi-spoke wheels come with the AMG ceramic high-performance compound brake. The brake callipers are painted in a bronze colour and bear the “AMG Carbon Ceramic” lettering.

“The next 50 years of AMG are going to be at least as exciting as the first 50”, concluded Dieter Zetsche, the Daimler CEO.