The AMG variants were way more exclusive. Only 4,333 such units of the first SLK 32 AMG (R170) were built, being provided the 3.2-liter V6 350 HP Lysholm mechanical compressor supercharged V6.

The second R171 generation got an aspirated 5.4-liter 360 HP V8 engine, a solution also used for the last R172 generation, which benefited, before this year’s facelift, from an aspirated V8, launched in 2012 with the SLK, developing 421 HP.

The facelift brought a major change for the Mercedes-AMG SLC 43 top variant that gets a 367 HP V6 biturbo engine to replace the former V8, but also the all-new 9-speed automatic gearbox.

Downsizing is the trend of today, but that was not the target. The new biturbo V6 is lighter and provides a better weight distribution. At the first sight, the output dropping by 54 HP seems to be a step back. But the acceleration from a standstill to 100 km/h is just by 0.1 seconds slower, while the 520 Nm maximum torque is only 20 Nm lower, but available from lower revs of only 2,000 rpm, compared to the previous 4.500 rpm. 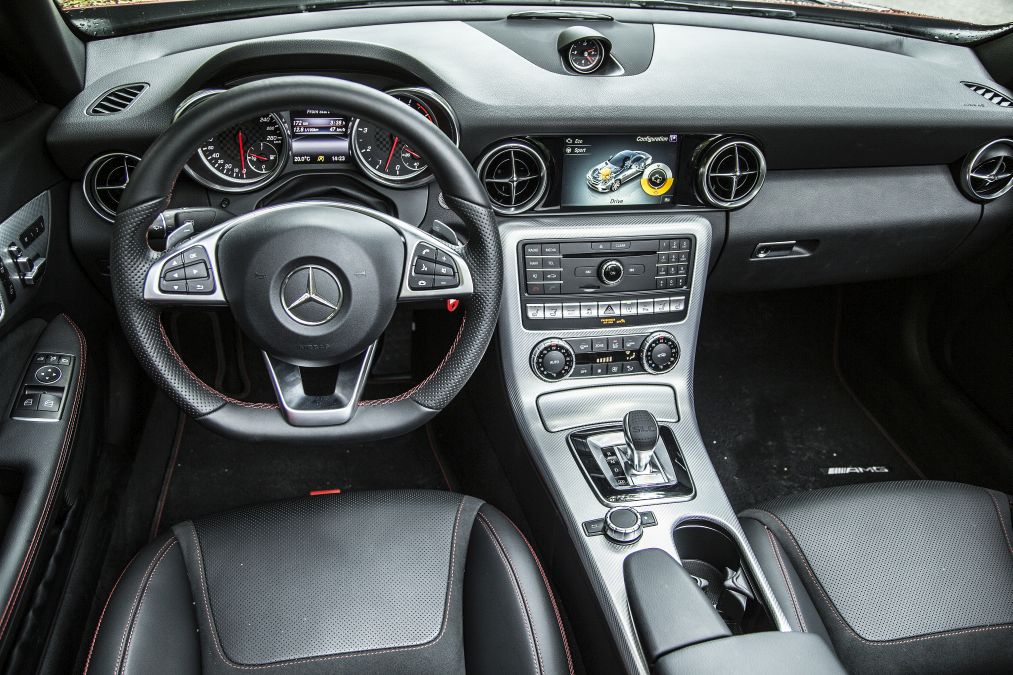 The Dynamic Select switch with the Eco, Comfort, Sport, Sport+ and Individual driving programs comes standard for the AMG model and sets the response of the engine and steering, as the AMG Ride Control (1,238 euros) adaptive suspension is also available. The new V6 biturbo is a kind of Dr. Jekyll and Mr.Hyde. In the Eco mode it goes obedient, and the start&stop system together with the sailing feature (when going into sailing, instead of the E symbol standing from Eco, a boat show up on the screen), help you save fuel. In such circumstances, you can achieve a fuel consumption around 8 l/100 km, also supported by the extraordinary flexibility of the new automatic gearbox that allows driving in the ninth gear at 90 km/h with just 1,200 rpm. In the Comfort mode, there are the same settings as in the Eco mode, but in the Sport setting, the response and the tone shift, so that in the Sport+ mode, the car shows its true potential, which means a very spontaneous feedback and a respectable pulling force.

In the Sport+ mode, not only the engine and steering response shift, but also the sound. The 2-flap AMG Sport exhaust system, featuring a similar structure as that of the AMG GT, standardly available in the SLC 43, puts on a high-class concert show. Upon acceleration, the baritone-like AMG typical sound, but not as low as that of the AMG GT, amplifies and, upon downgrading, the mutter of the exhaust gases delights the hearing, as if we’re running along a DTM racetrack.

As in any AMG model, the ESP system features three stages: On, Handling Mode and Off. When pushed to the limit, the SLC 43 is slightly understeering, but with the Handling Mode On, the rear axle can smoothly slide by 30 degrees from the car axis. You don’t get that side-slip like the Boxster does, but you still get plenty of entertainment, thanks to the sensational, precise short steering. There are only two steering wheel turns from one end of the top to the end of the race, meaning that you are only allowed to revolve the steering wheel a quarter of a rotation for a 90-degree turn. The steering ratio is of only 15,5:1. Optionally, Mercedes provides a rear lock differential within the AMG Handling package, also including brake red calipers, but it is quite expensive (3,332 euros).

The three-link front suspension and the four-link rear one have been reworked. The three-link front axle has been provided with stiffer steering knuckles, improved elastokinematics and increased negative camber. The four-link rear axle with optimised elastokinematics, increased negative camber and special forged-aluminium track rods not only improves the driving dynamics, but also makes the SLC 43 more controllable when driven at the limit. Even without AMG Ride Control adaptive suspension the new suspension provide high ride comfort on the 18-inch AMG wheels, shod with 235/40 R18 – 255/35 R18 tires.

The interior also underwent change. Between the round center air vents, there is a 7-inch large display, compared with the previous 5.8-inch one, with the Audio 20 system fit as standard. The instrument cluster is also new with two tube-like dials and a new 4.5-inch multifunction colour TFT display. The dashboard dials feature a checkered flag background and red needles, with the speedometer scaled up to 280 km/h. The new flat bottomed AMG steering wheel provides a great grip, as it is wrapped in Nappa perforated leather in the grip zones, featuring red topstitching. The AMG sport seats with Nappa leather upholstery, perforated sun-reflecting in the shoulder and seating area, and microfiber, are ideally designed and can be optionally fitted with the Mercedes-patented neck-heating AirScarf system (488 euros). The two plastic-made wind-deflectors located behind the headrests (333 euro) do not shield the occupants from the wind quite enough, still they look very attractive. If you look for more efficiency but less design, you can choose the classic textile windshield for only 167 euros. 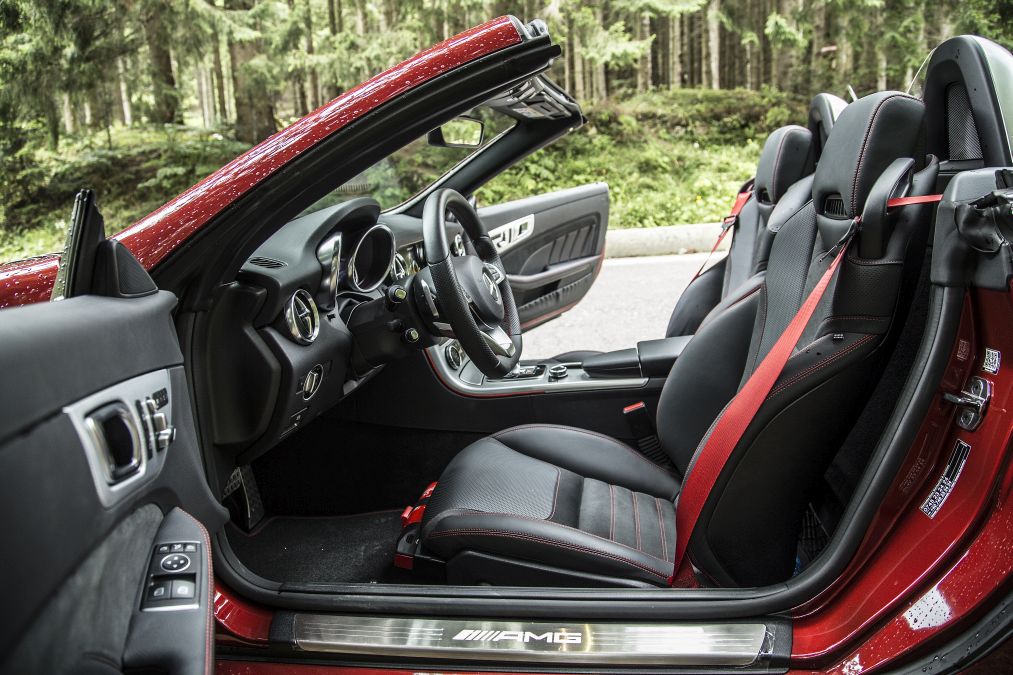 The central tunnel is covered in light aluminium trim parts, looking great, with the SLC-branded small gear lever located in the middle. From the shutter next to the center armrest, the roof can retract while driving at speed up to 40 km/h, but the boot volume is significantly reduced from 335 to 225 liters.

The Mercedes-AMG SLC 43 dazzles with its fabulous sound and exciting behavior, all thanks to the short precise steering. With a more congenial soundtrack and a comfort superior to that provided by the Porsche 718 Boxster, yet featuring almost similar dynamics, the Mercedes-AMG SLC 43 is a better choice than its Stuttgart-made rival, and also less expensive.