Mercedes is closing in on BMW i3 with a conventional model that provides more space, more range and comparable performance. First test drive of the Mercedes-Benz B-Class Electric Drive.

Apart from the BMW, Mercedes-Benz has chosen some other solution to produce a fully electrical compact model. If BMW has chosen to take chances spending a mythical fortune, which, according to some sources, has reached 6 billion euros for the industrialization of a complete different family (the i3, the i8), Mercedes developed a fully electrical model based on the B-Class, that looks pretty conventional. Therefore, this electric B-Class is produced on the same production line as other B-Class models with conventional propulsion and, depending on the demand, Mercedes can flexibly adjust production.

„Nobody should stay at home” is the motto by which Mercedes is teasing the Bavarian rival BMW i3, a hint about the interior smaller room and about the two rear doors, that are more narrow than the conventional ones. 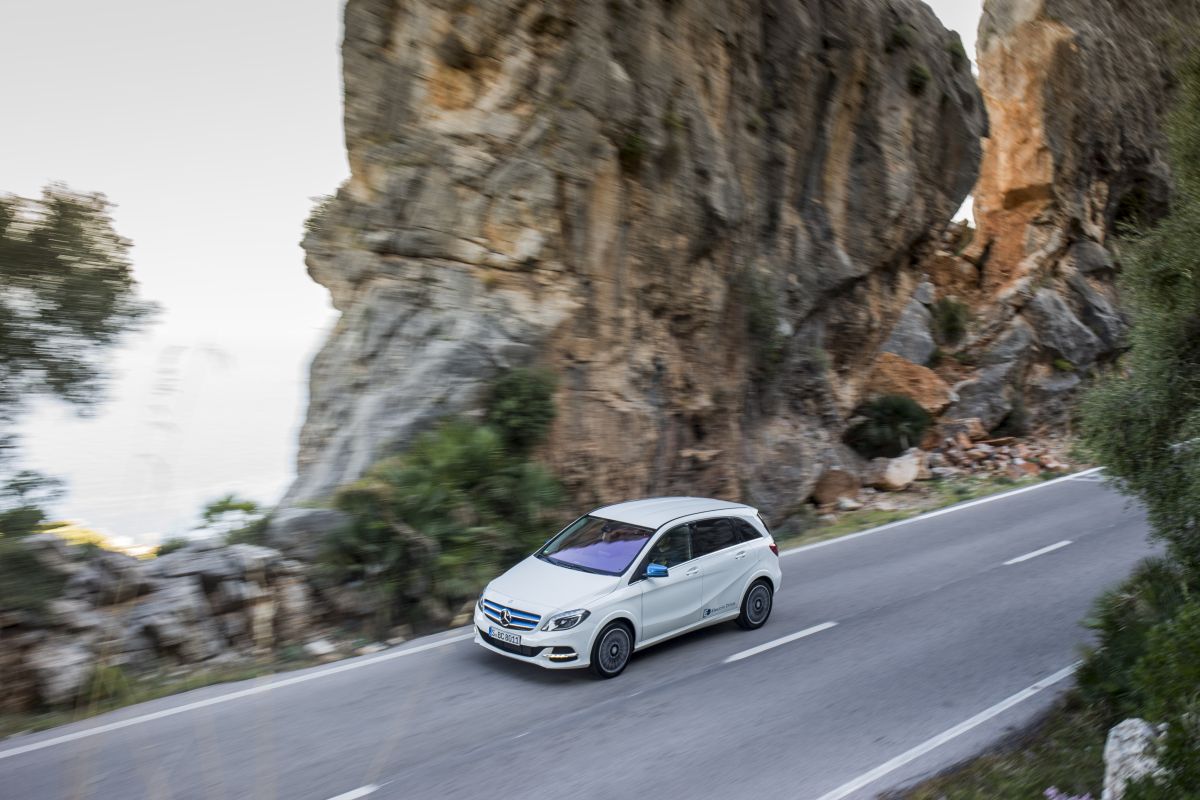 And Mercedes keeps putting the B-Class Electric Drive against the BMW i3 without actually pointing at it. The B-Class Electric Drive offers five full sized seats and a very big boot, even bigger than that in the conventional versions. Also for the current B-Class, there is a double floor, even if it doesn’t follow the same recipe as in the sandwich structure of the former generation.

In the former generation, the body-in-white had a double floor from the front to the rear. Both front seats and the rear ones were placed higher up and the gearbox and the engine were positioned horizontally almost under the second floor.

In the new generation, the body-in-white has a classical floor and subsequently, an extra floor was mounted right under the rear seats. Under the extra floor, there is a space depending of the propulsion type for the batteries, the natural gas tanks or the hydrogen tanks of the Fuel-Cell next generation. Mercedes calls this space an „energy space”. In case of B-Class Electric Drive, this space is used for the Li-Ion batteries with a 28 kwh capacity. These can be charged from a normal plug (230 V, monophase electric power) in 9,1 hours or from a wallbox (400 V, three-phase electric power) in only 3 hours.

The B-Class Electric Drive version was developed in collaboration with Tesla Motors, with which Mercedes has been teaming up in the electrical mobility field for a long time. The electric engine provides a 180 HP output and a maximum torque of 340 Nm, comparable witht that of a 2-liter petrol turbo engine. The Tesla expertise is obvious right from the start. Just like in the Tesla Model S, the engine linearly and intensely speeds up just like a TGV and is extremely quiet. Only 7,9 seconds are enough for it to speed up from 0 to 100 km and then the B-Class Electric Drive keeps speeding just as linearly up to 160 km/h maximum speed. No other petrol engine in the world speeds up so distortionlessly and no other torque converter or double clutch automatic gearbox, no matter how sophisticated, delivers such a linear power flow. The B-Class Electric Drive has a 1-speed gear box and the paddles from behind the wheel, used to shift gears in other Mercedes models, are now used to recover energy.

In the D+ mode, there is no energy recovery, as the car is in the sailing mode. This means that if you lift the foot of the throttle, the car does not brake and the energy is not recovered in braking. In the D Mode, the recovery level is mild and in the D-, the energy saving is the most effective. In the D Auto Mode, the energy is recovered depending on the traffic flow. Optionally, the D Auto Mode works like in the S 500 Plug-In Hybrid, based on a radar system. If the car at the front brakes, the B-Class Electric Drive also brakes and the energy is recovered. If the car at the front does not brake, then the Electric Drive goes into the no saving sailing mode. The changing of the recovery levels system is sorbed from the Tesla and offers either the possibilty of saving by recovering energy, either a pleasant cruise, without the braking effect, slammed by some, when you lift the foot off the throttle.

Apart from the Efficiency (E), Comfort (C) and Sport (S) driving modes in the conventional Mercedes models, we can select from the E+ (Economy Plus), E (Economy) and S (Sport) in the B-Class Electric Drive. In the E+ mode, the power is reduced at approximately 65 kw and the maxium speed is of 110 km/h. But in the kickdown mode, the maxium power is instantly at hand. In the E mode, the power is limited down to 98 kw, but you can also call on the maximum power, if you press the kickdown. In the Sport mode, the B-Class is by no means inferior to a 2-liter petrol turbo engine. 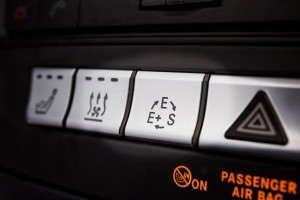 For the test, we had the B-Class Electric Drive with a 100% charged battery. At the start, the range displayed 240 km and, after 45 km testing in the E and E+ modes with the saving in the D and D- modes, the on-board computer displayed a range of 175 km more. Therefore, a real range of 200 km is quite probable and this figure represents more than the daily average of most customers. There is also a range extender that theoretically adds up 30 km to the 200 km range. This option is triggered by a button in the instrument cluster and charges the battery to its maxium capacity, but frequent use is not recommended, because full charging reduces the endurance, for which Mercedes offers an 8-year or 100.000 km warranty.

In a long distance drive, the B-Class Electric Drive is pleasant in driving and extremely quiet. In complete silence, you can only hear a slight wind and tire noise on poor roads. As an option for not scaring off the pedestrians and the bikers, Mercedes offers a sound generator that works to speeds up to 30 km/h.

The B-Class Electric Drive weighs 1725 kg, by 220 kg more than the B 220 CDI and by 535 kg more than the BMW i3. But thanks to the batteries position under the rear seats, between the two axles, the roadholding is in no way affected. Actually, the B-Class Electric Drive feels like a gasoline B-Class in driving, as it has lower understeering effect than the diesel version of a 2,1-liter engine. 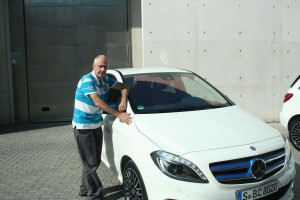 Just like in the diesel or in the petrol engined B-Class, you can choose from Urban and Style lines or opt for a special line called Electric Art, which includes two special tones of paint, Cirrus White and South Sea Blue, 18-inch alloy wheels, louvres in white/blue in the radiator grille, the seats and the upper part of the dashboard covered up in Artico leather and the Electric Drive logo placed on the sides. The car can get further customizing with the Exclusive Package. The automatic Thermotronic climate control comes standard and, by using the „Mercedes connect me” system, you can heat or cool the car in advance and you can find out the battery charging level. Also, all the safety and assistance systems from the conventional version including Collsion Prevention Assist Plus are present on the electrical version.

From a practical perspective, the B-Class Electric Drive is a better alternative than the BMW i3. Also the range and the performance are comparable with the i3. But it has no special design up against the conventional model and does not use light materials like the i3, which has raised the weight pretty much. But the high weight does not intrude on the energy consumption, nor on the roadholding.